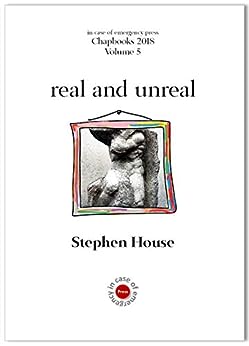 PEAM (Pen with Ears & Mind).
5.0 out of 5 stars As Real As it Gets.
Reviewed in Australia on 21 March 2019
Over the last few decades, Stephen House has earned the reputation of being one of Australia's edgiest playwrights. The footnotes in this chapbook, 'Real and Unreal', reveal that he has won at least as many awards for his poetry as he has for his plays. His poems, like his plays, often explore the seedy underworld; the dark places of society and the mind where many never venture. There's illicit sex and drugs aplenty. Yet although the locations and events are often the grimiest imaginable, House somehow manages to draw great beauty from these starkest of situations. You may have just read a piece about some desperado spiralling out of control on a night awash with drugs and alcohol, but somehow this writer leads you to feel deeply touched and uplifted by the subtext and by his incredibly adept portrayal of human character. Life, and humanity, is full of great contradictions, and House brings this to the fore in his work. At times, you are left to wonder how subject matter so brutal can be so touching. Not all of these poems are hard-hitting or full-on raunchy, though. A fair sprinkling of them are quirky and gentle and tell the most satisfying stories in the most soul-cradling language. House certainly has a very individualistic style. Well-placed words and beautiful imagery. Brooding....radiant....harsh....tender....sordid....illuminating.....the contradictions of people and worlds real and unreal.
Read more
Helpful
Report abuse
See all reviews
Back to top
Get to Know Us
Make Money with Us
Let Us Help You
And don't forget:
© 1996-2021, Amazon.com, Inc. or its affiliates