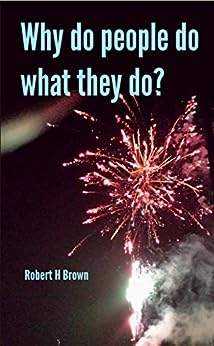 Why do people do what they do? Kindle Edition

by Robert Brown (Author) Format: Kindle Edition
See all formats and editions
Sorry, there was a problem loading this page. Try again.
An engineer considers some of the big questions facing the conscious humans mind. The evolution of the earth as a good place for humans to live. Have we developed an appropriate global society? Why do people develop certain personalities and live as they do?
The philosophy of living , developing a purpose and the apparent inbuilt need to embrace something greater than ourselves; how this has led to creativity and a variety of religious beliefs.
A review of how the brain operates to retain memories, establish personality, belief systems, analytical thought and behavior.
An outline of techniques used for mind control by people from educators, advertisers, politicians through to terrorists and methods to guard against and reverse malicious techniques.
Discussion of some paranormal and spiritual beliefs from early times till to day.
The imagination and understanding that has enabled human beings in 2018 to be most knowledgeable, best fed and healthiest people ever; yet still demonstrate real stupidity in management of global affairs, ignoring the immense physical and sociological risks of the anthropomorphic age.

REVIEWER FROM AUSTRALIA I give it 5 stars, HN
Reason versus belief
The title of this book presents a rhetorical question, and we know there is no answer to it. It is there to stimulate thought, and thought requires reasoning. The book does in fact pit belief against reason and presents the case for the latter. In this case the book addresses religious belief and in particular that of so-called fringe groups of believers who, almost always, are “led up the garden path” by one mesmerising, eloquent person who has assumed control over the others. Their object and foundation for their existence is usually a weird, religious story, and – though this is universally denied – making money out of all this is their leader’s aim.
As it starts out, the book addresses the rise of humanity via biological evolution and the resulting intelligence which allows the human to enjoy his high standard of living. It also explains the evolutionary processes of the brain which, after all, represents the “control centre” of the person.
All this is admirable, in fact more than that – it is wonderful, a consequence of the application of reason which is the privilege of the human animal. Not only that, the privilege extends to what we call “belief”, a more elusive concept which is harder to deal with. It is the world outside reason and knowledge. It includes the world of religion as we understand it and invokes inter alia the unanswerable question of whether there is such a thing as afterlife. (More generally life before and after your current life on earth.) Though no rational evidence exists of such afterlife, it seems more people believe (or want to believe) that afterlife exists than people who don’t. Brown warns the reader that such mental predilection is subject to abuse by religious charlatans and shammers who start with promises, then follow warnings and threats and finally the journey ends in disaster.
The writer presents his referenced case convincingly, but the reader can be distracted by the too ambitious an attempt to include too much evolutionary and historical information. Being an engineer, the writer chooses his words and sentences precisely and without waste which is a welcome change from too many prolix, abstruse or tedious accounts existing on the market. At the same time, could I suggest here a little bit of Bill Bryson, as in A Short History of Nearly Everything, who is never short of a narration but who slides down like a vanilla soufflé, light and sweet. Brown’s course has meat and calories and provides much food for thought.

Bob
5.0 out of 5 stars A review of what makes people "tick"
Reviewed in Australia on 21 November 2018
Verified Purchase
In giving a five star rating I must immediately record my bias - since I am the author! However I think I entitled to say that I have been very pleased by the number of people who have contacted me to say that they found that the book gave them a useful outline of biological evolution, the way the human brain operates psychologically and a summary of philosophical and religious concepts; without forcing a particular belief onto the reader. The overall assessment seems to be that the book provides a useful base to consider the big questions facing the life of everybody.
Read more
Helpful
Report abuse

mattzcoz
1.0 out of 5 stars Could make a decent pamphlet if it was $5 or something like that.
Reviewed in the United States on 26 July 2021
Verified Purchase
A small simple gloss of things already known by most people who are at least casually aware of aspects of human behavior. It could make a decent 6-12 page pamphlet for $5, but no where near worth its paperback price. It was pretty much a waste of money.
Read more
Report abuse
See all reviews
Report an issue
Does this item contain inappropriate content?
Report
Do you believe that this item violates a copyright?
Report
Does this item contain quality or formatting issues?
Report