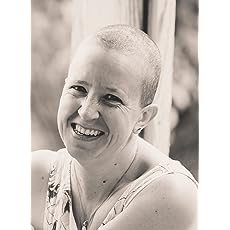 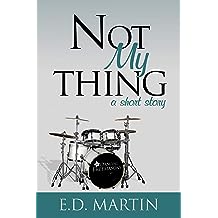 When The Dancing Freemasons embark on their first major tour, Jeff’s dreams of being a rock star have come true – until he can no longer connect with the music. One night after a show, he meets a woman who might be the one to get the music flowing again, but is the cost worth it?
Read more
includes tax, if applicable 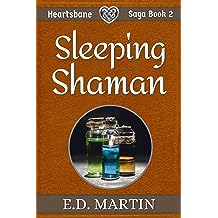 Nyah thought she’d fit in better in the capital rather than in her tiny village, but life in the big city is tougher than she anticipated. When she stumbles across into familiar face, she gladly jumps at the chance for a new adventure with her barbarian friends. They’re headed to to Egwu’s home country where they hope his scholar father can translate Heartsbane, the book that holds the cure for Prince Brandulfur’s debilitating curse.

Their plans change as soon as they arrive and discover that Egwu’s family is missing, most likely cursed as well. And meanwhile time is running out for Brand, who grows weaker every day.

Nyah vows to save her friend by solving the mystery of Egwu’s missing family, but she didn’t anticipate all the obstacles in her way: a deadly rivalry between two families, a clash of powerful cultures, and a budding romance that seems destined for heartbreak. She’ll need all her wits to outsmart her opponent—that is, if she can even figure out who it is.

Sleeping Shaman is the second book in a series of fairy tales retold in a world of Vikings. If you like sassy heroines, adventures spanning the medieval world, and a touch of romance, you'll love The Heartsbane Saga, E.D. Martin's historical fantasy series. 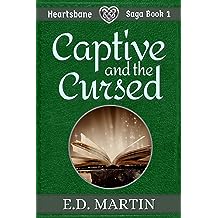 Nyah's merchant father raised her and her younger sister Payton on tales of treasure and excitement, but after he returns home from his latest trip addle-minded, Nyah must put aside her dreams of adventure and focus on more practical matters, like her betrothal to the illiterate son of the village chief. But when a roving band of barbarians kidnap Payton and the village leaders do nothing to rescue her, Nyah has no choice but to take matters into her own hands. She offers herself in her sister's place, doomed to travel with the barbarian army until their price is paid.

The army is led by warrior Brandulfur, a man who suffers from a hideous, painful curse that's been put upon him and his court. Although he's officially in her country to aid his childhood friend in raising an army to support the king, he's on a personal quest for the book that holds the cure for his curse - a book that Nyah soon realizes her father stole from him.

Determined to return to her family, she'll need all the allies she can get. But she soon realizes no one is who they seem, including the people closest to her. She'll have to make hard choices if she wants her life to be the same as before - but is that even what she wants anymore?

Captive and the Cursed is the first book in a series of fairy tales retold in a world of Vikings. If you like sassy heroines, adventures spanning the medieval world, and a touch of romance, you'll love The Heartsbane Saga, E.D. Martin's new historical fantasy series. 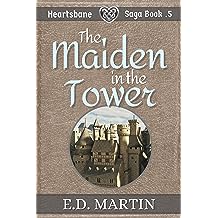 Carys barely remembers her life before her father sold her to pay his debts. Locked away in her mistress’s chamber, she doesn’t dare to dream of anything better for herself, until a chance encounter with a traveling merchant changes her life forever.

Storm has traveled the lengths of the known world, yet when he sees a servant girl locked in a tower, he knows he’ll do anything to rescue her.

Can Storm and Carys overcome the obstacles in their path and reach the happily ever after they both want?

The Maiden in the Tower is a standalone short story that accompanies a series of fairy tales retold in a world of Vikings. If you like sassy heroines, adventures spanning the medieval world, and a touch of romance, you’ll love The Heartsbane Saga, E.D. Martin’s new historical fantasy series. 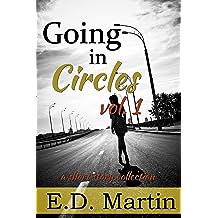 Going in Circles: 10 Very Short Stories 22/01/2019
by E.D. Martin
( 1 )
$1.38
Ten short stories about six people who are connected in ways they don't even realize, followed by a sneak peek at the author's upcoming novel, Waylaid on the Road to Nowhere, about five friends who work together to bring down a local drug lord.
Read more
includes tax, if applicable 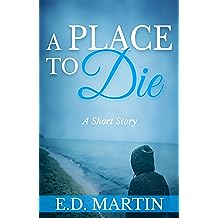 When Libby spends a summer helping out at her mom’s bed and breakfast-turned-hospice, she doesn’t expect to spend her time babysitting someone like Mr. Calloway – a young, vibrant financial planner with a mischievous streak. But Mr. Calloway is sicker than he seems, something neither he nor his family want to acknowledge. Can Libby help him accept his fate without losing her heart?
Read more
Other Formats:: Paperback
includes tax, if applicable 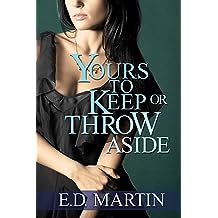 When her husband David’s infidelities are revealed, shattering the perfect life Kasey Sanford thought they’d created together, it’s a wake-up call that she’s lost herself along the way.

"Redemption. This was the first word that occurred to me with the last sentence of the book. Redemption for what we've done; redemption from what we've suffered. ...a touching story of two people struggling to find their place in life and their true self, two souls which have suffered more than enough, two human beings who have discovered that we are the loneliest in our darkest hours." ~ Tsvetalina Baykusheva

Kasey demands that David move with her to a new town, to a fresh start for their life together. She loves the freedom of reinventing herself, including her new friendship with police officer and soldier Andrew Adams, who is handsome and charming. His interest in Kasey awakens feelings she’d rather have for her husband, who pushes her further away with each of his alcohol-fueled outbursts. Intent on preserving her marriage for the sake of her young daughter, and with no one else to confide in, Kasey turns to Andrew for support.

But Andrew’s own life is falling apart as he’s put on standby for another deployment, triggering painful memories he’d rather ignore. He’ll do anything to forget the soldiers who didn’t return home with him, his stillborn son, and all those he’s disappointed, including God.

As their relationship grows, Kasey must decide if she will repair her marriage and remain with the man she’s always loved, or if she will give up everything she holds dear to save the soul of a man she barely knows, a man who fights her at every step, a man desperate to regain his faith in God, in humanity, and in himself.

"This book left me feeling both happy and depressed. There were times I was cheering for certain characters thinking, "Heck yeah!" and other times I was ready to hunt down the author and demand a rewrite. Some things that happened completely shocked me... but admittedly, if everything was predictable, it would not be interesting. There was a point early on in the book where there was no turning back and I could not put it down. I got really invested in the characters, which is saying a lot for me... I don't get into book characters this much very often. I'm usually pretty heartless! This book was different. It stuck with me, so much so that I had to hound my best friend to read it so we could discuss it. It would be a great book club selection, and the author even includes some questions for discussion." ~ Charlie 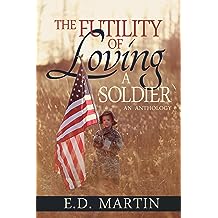 "This is an outstanding collection of stories about veterans of wars. WW I, Nam, WW II, Desert Storm and more. All of them will tug at your heart and make you realize that some vets never get over the traumatic events of war (or their service)." ~ A Navy Vet...VT town (Amazon Top 500 Reviewer)

The stories in this collection explore the physical and psychological effects of combat, both on those who serve and those back home. Told from the points of view of spouses and children as well as the soldiers themselves, the stories tackle eleven different scenarios spanning five American wars. Guilt and acceptance, despair and hope, selfishness and sacrifice, and above all, love, blend together as characters come to realize maybe their feelings aren’t futile after all.

Eleven Stories of What It Means to Love a Soldier:

"This anthology of short stories packs a powerful punch. The theme centers on how some soldiers can fail to adjust to their homecomings. For those unlucky veterans, there's no neatly fit back into their former lives. They have difficulty living up to their own expectations as well as those of others. Choices are made, some with long lasting consequences. Fortunately, there are rays of hope here that belies the title of the book. A dog, a childhood friend, a child of a new generation offer keys to unlock the weighty chains of PTSD and unreasonable expectations. In addition, the author has supplied a list of resources for veterans in the back of the book." - M. R. Davidsaver

Evolved Publishing presents a collection of interconnected short stories, focused on the difficulties of maintaining relationships with troubled soldiers who've returned from war, from the author of the literary/women's fiction novel Yours to Keep or Throw Aside. [DRM-Free]

"This is an outstanding collection of stories about veterans of wars. WW I, Nam, WW II, Desert Storm and more. All of them will tug at your heart and make you realize that some vets never get over the traumatic events of war (or their service). Gone but Not Forgotten was my favorite one of all. What could have been...if only... I also appreciated the fact that at the end the author lists some of the resources available to veterans. I had never heard of the Gift from Within organization despite being a vet of the Navy and retired after my 20 years. Most highly recommended and I am going to see what else this author has written." - Serenity (Amazon Top 100 Reviewer) 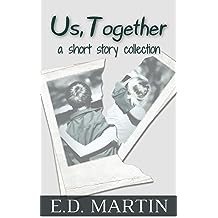 An unexpected pregnancy leads a high school student to plan out his life with The One, but does she feel the same way?

When substance use drives a father from his family, can his son fill his shoes?

A troubled home life pushes a girl to her teacher for help, forcing her to realize what she wants might not be what she can get.

When a historic flood threatens two teens on opposite sides of the river, can they realize what matters most before everything is destroyed?

As an undocumented student struggles to get an education, can he keep learning when he can't even control his life?

When a young girl looks for love and belonging, who will help her find it in the right places?

These six short stories, all loosely based on stories and students ED Martin encountered while working with at-risk kids and families, highlight the struggles teenagers face today, from relationships and unplanned pregnancy, to absent parents and poverty.
Read more
includes tax, if applicable 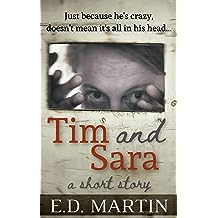 The victim of debilitating flashbacks, Tim is content to spend the rest of his life at Kirkbride, a state mental hospital. But his friend and fellow resident Sara is concerned that she has to save her soul before it's too late, and so she devises a plan to break them out of the hospital.

Can Tim help his friend while holding onto what's left of his sanity?
Read more
includes tax, if applicable
Back to top
Get to Know Us
Make Money with Us
Let Us Help You
And don't forget:
© 1996-2021, Amazon.com, Inc. or its affiliates