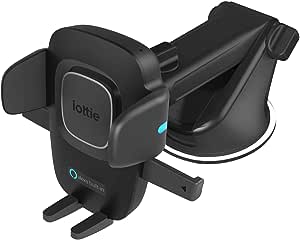 Brand: iOttie
3.9 out of 5 stars 58 ratings
Secure transaction
Returns Policy
Amazon-managed Delivery
Your transaction is secure
We work hard to protect your security and privacy. Our payment security system encrypts your information during transmission. We don’t share your credit card details with third-party sellers, and we don’t sell your information to others. Learn more
Amazon-managed Delivery
Amazon manages delivery by using preferred couriers/agents. Order delivery tracking to your doorstep is available
Show More
New (2) from $87.07

You’ll love heading out for a drive with an Easy One Touch Pro Connect by your side. The smartphone car mount is brilliantly engineered with Alexa built-in. That means you will be able to access thousands of Alexa skills from the road, whether you need driving directions, to make a call, check the weather or simply want to stream the latest audio book or top 10 tunes. And, of course, you can do all of this with your hands remaining on the wheel and your eyes on the road. The mount also features our patented Easy One Touch mechanism, which automatically secures your phone once the trigger button is engaged.

Hop in the car and explore new roads with the Easy One Touch Connect Pro!

3.9 out of 5 stars
3.9 out of 5
58 global ratings
How are ratings calculated?
To calculate the overall star rating and percentage breakdown by star, we don’t use a simple average. Instead, our system considers things like how recent a review is and if the reviewer bought the item on Amazon. It also analyses reviews to verify trustworthiness.

Adam Goring
5.0 out of 5 stars device works with no problems
Reviewed in Australia on 11 November 2020
Verified Purchase
it works great with no problems and no issues wish I bought this ages ago
Read more

Jim Germann
1.0 out of 5 stars wont charge
Reviewed in Canada on 17 November 2020
Verified Purchase
Alexa works great but the wireless charger does not, now i have to go through the pain of sending it back.
I tried it on two different phones and with and without a case

Archean
4.0 out of 5 stars A "Smart" Phone Mount Which Seeks Purpose
Reviewed in the United States on 10 November 2020
Verified PurchaseEarly Reviewer Rewards(What's this?)
Background Info:
I bought the iOttie Easy One Touch Connect Pro (New) - Gen 2 because I liked some of iOttie's previous mounts and wanted to give this one a shot. I still prefer the "non-smart" mounts, but more on that later.

Packaging:
The packaging differs from the other products iOttie also offers, but it is still aesthetically pleasing.
The front of the packaging has been changed to a more minimalist design with the mount "floating" on a seafoam-green backdrop. Plastic is still used to display the mount internally--cardboard or paper could be used as evidenced by the arm and mounting pad box which is already paper.

The side of the box still shows the mount being used in a car with infotainment--I see no reason for a "smart" phone mount if your car already has Apple CarPlay, Android Auto, or some other phone integration system, but that will be discussed later.

First Impressions:
The mount feels solid and now features a slot design for the lower limit arm--the part that can be adjusted to allow for taller phones. Almost every surface is matte black included the soft-touch padding that holds the phone in place. There is a sticker on the bottom of the front of the mount which says "alexa built-in" although this seems to be more of an advertisement and less of a note to the user.

A mute button and micro-USB port (no cover) is present on the rear of the device. The charger used to power the device has an integrated USB port so you will still have access to USB charging if your vehicle only has a single accessory port.

More Details:
The suction cup and tab mechanism is largely unchanged and intuitive; no reason to fix what already works.
The manual included with the iOttie Easy One Touch Connect Pro (New) - Gen 2 no longer mentions a "curing time" or temperature to mount the base and arm, but previously the manual stated that the ambient temperature needed to exceed 40° and to allow at least 12 hours for a bond to form between the mounting pad and the dashboard or glass.

Additionally, if you have a car where the dashboard is made of rubber or has been recalled for something like UV degradation (google car dashboard melting recalls), you may have an issue with the adhesive regardless--this isn't to say it won't work, but if you have a mid-2000s Toyota Camry and park in the sun, you might find that the suction cup has melted. Many reviews still complain about suction cups melting, but your mileage may vary.

Alexa Integration:
The iOttie Easy One Touch Connect Pro (New) - Gen 2 is a cell phone mount with integrated and hands-free Alexa access. As far as the setup process goes, you need to install the iOttie Connect App, the Amazon Alexa app, and any other apps you intended to use such as Pandora or Spotify. Most people will already have these apps installed, but it is something to note. The installation process took me about 20 minutes, including download time and account creation. I did not need to create an account to use the iOttie Connect app. Most of the setup issues I had were due to the Amazon Alexa app, so I won't discuss those.

Something else to note is that you still need to interact with the device for things like navigation--probably a permissions issue, but certain states do not allow for personal hand operated devices (phones) to be used while driving.

Notes:
The purpose of this device appears to be little more than a way to gain access to "auto-mode" for the Amazon Alexa app. With so many other hands-free options like Apple CarPlay, Android Auto, SYNC, Generic, etc. I see little reason to purchase what is essentially physical DRM. Technically, the Amazon Alexa app is not supposed to work in "auto-mode" unless it is connected to an Amazon approved auto-mode device, but many phones offer easy access to developer mode...I won't get into this either.

Unless you have a very old phone, most phones and apps already offer a hands-free mode that don't require an accessory port and multiple apps.

TL;DR If you want an Alexa enabled phone mount, this is your best bet; otherwise I would suggest one of iOttie's other offerings because $59.95 (at the time of review) is too much for too little.

Amazon Customer
5.0 out of 5 stars awesome product
Reviewed in the United States on 1 November 2020
Verified PurchaseEarly Reviewer Rewards(What's this?)
I had a iOttie dashmount for 3 years and it's robust and easy to use. This time I want to give another try so I bought this to try its Alexa feature. No complaint except for that I have to use my phone's data plan.
Read more
5 people found this helpful
Report abuse

K_Luber
1.0 out of 5 stars IT IS NOT A CHARGER!
Reviewed in the United States on 30 November 2020
Verified Purchase
What an absolute joke. One quick little line that mentions that this isn't a charger. WTF would j want with a car holder this big that doesn't charge my device. A complete and total waste of money. Worthless.
Read more
3 people found this helpful
Report abuse

Larry Davis
5.0 out of 5 stars Great Product at a awesome price! You won't be disappointed.
Reviewed in the United States on 24 December 2020
Verified Purchase
I have and still use the version 1 of this product which is simply a cell phone holder. However I will say that even tho that one lacks some of the newer features I still love using it in my truck. When that released this one with alexa I had to try out it out in my corvette since that didn't have an alexa compatible device and thats my preferred way of listening to music on the road.

This product with its new improvements is spot on what I was looking for. If I had one complaint its that the unit cannot do QI Charging (wireless charging).

That said it works just as well if not better than the original and you should definitely pick up one if you are in the market for a phone holder in your vehicle.
Read more
Report abuse
See all reviews
Get FREE delivery with Amazon Prime
Prime members enjoy FREE Delivery and exclusive access to movies, TV shows, music, Kindle e-books, Twitch Prime, and more.
> Get Started
Back to top
Get to Know Us
Make Money with Us
Let Us Help You
And don't forget:
© 1996-2020, Amazon.com, Inc. or its affiliates