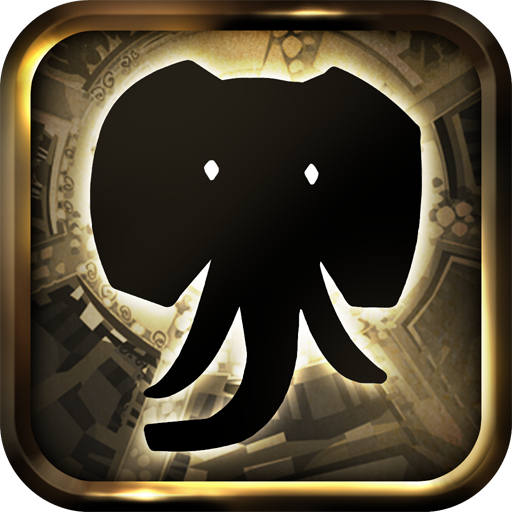 A quest crammed with puzzles in the heart of Paris

After arriving in Paris to present his latest invention, the Time Camera, at the Universal Science Congress, Professor Weissmann disappears without a trace.
His daughter, Laura, believes he has been kidnapped. Aided by Eustache, the Professor's cat, Laura sets out on the trail of a mysterious sect, whose symbol is 9 elephants.
The intrepid duo is confronted by a series of challenges, and each has to draw on their powers of invention and deduction to unravel the plot at the heart of this extraordinary adventure.

Follow our two intrepid investigators across the city as you've never seen it before, a combination of fantasy and the Crazy Years.
Converse with colourful characters with secrets to share.
Solve over 230 puzzles to reveal the secret of the 9 elephants.
Plunge into the heart of the capital, and savour this extraordinary tale featuring a modern art exhibition, poisoned oranges, a magician's cat, a cyclist, an accordion champion, an esoteric conspiracy, the Paris catacombs, the destruction of the Eiffel Tower and... 9 elephants.

*****
You have a comment, an opinion, a question, a proposition about one of our games or apps?
Join our Facebook fanpage!
http://www.facebook.com/microids

3.1 out of 5 stars
3.1 out of 5
234 global ratings
How are ratings calculated?
To calculate the overall star rating and percentage breakdown by star, we don’t use a simple average. Instead, our system considers things like how recent a review is and if the reviewer bought the item on Amazon. It also analyses reviews to verify trustworthiness.

juju lovaboy
1.0 out of 5 stars flawed
Reviewed in Australia on 18 October 2014
Verified Purchase
Great setting, great artwork and characters STUFFED UP BY PUZZLES THAT ARE VAGUE AND ANNOYING WITH NO HINTS WHEN STUCK. UNINSTALLING THIS RUBBISH.
Read more
Helpful
Sending feedback...
Thank you for your feedback.
Sorry, we failed to record your vote. Please try again
Report abuse

S. Brackenridge
3.0 out of 5 stars A Professor Layton knock off, not bad but not great
Reviewed in the United Kingdom on 10 October 2014
Verified Purchase
This puzzle adventure is a total rip off o'clock the Professor Layton games from the Nintendo DS/3DS, but is not bad for a Free App of the Day. It looks great, easily on a par with those wonderful games. Sadly, the level of the puzzles is pretty poor: not enough variety, mostly far, far too easy. So easy, in fact, that you often spend ages wondering if you are missing some little twist (which was often the case with Layton), before going with the blindingly obvious answer and getting it right.

As in The Layton games, you wander from location to location, collecting items that people give you in return for solving their puzzles. You also need to collect "time films" which appear randomly for short periods of time in the various locations. These allow you to redo puzzles that you get wrong. There seem to be plenty on offer, although you have to catch them when they appear (which is annoying), but, unless the puzzles ramp up massively in difficulty later on, you are extremely unlikely to run out.

Overall, it gets a little tedious after a while, especially the long wodges of often comically mistranslated/badly scripted dialogue and the endless toing and froing between locations. Solve a puzzle and you get a tedious animation, but at least you can skip this. The initial loading screens also also seems to go on forever. Worth a look, if you like a bit of puzzle solving, but don't expect a Laytonesque masterpiece.
Read more
3 people found this helpful
Report abuse

katof9tails
3.0 out of 5 stars Not a bad game
Reviewed in the United Kingdom on 25 May 2014
Verified Purchase
Nice artwork with a cool French 1950's theme. The puzzles are fun & get harder as you go further. It does have some annoying niggles though. There are only a few basic puzzle types & it gets a bit boring after a while. If you get a puzzle wrong you have to get films to have another go. Sometimes the app doesn't notice that you can't do anything till you get more films, especially when you are doing an elefant puzzle - you have to go out to the main menu then go back in. Also on the elefant puzzles, you have to go through the entire conversation to go back to the puzzle which is irritating. There are only a few short music loops as well & those tunes get annoying after a while. I haven't finished it yet - got a bit bored tbh, but I will go back to it & complete it.

Overall, good if you like puzzles & good to go back to. Quite a lot for the price. I wouldn't recommend it if you get bored easily.
Read more
8 people found this helpful
Report abuse

Julia B
2.0 out of 5 stars Style over substance
Reviewed in the United Kingdom on 20 June 2015
Verified Purchase
Nice artwork and animation, but boring, repetitive and at times plain wrong!

Storyline is introduced straight away and peters out almost as quickly. There are a few different puzzle types - the slide puzzles, the "untangle this" -type thing and memorise the cards game get very old very quickly. There are some nice little logic puzzles, a few trick questions and a "right thing, right order" game, like the old Mastermind board game which I found quite enjoyable, then tangram and trivia games which wavered between being simple - with basic knowledge you can work which is closer to Paris etc. and infuriating.

At least two occasions I untangled the string but it did not let me pass, and on one trivia question I answered correctly, it said I was wrong so I tried the next most likely answer - said I was correct but then printed my first (correct) answer with explanation! On the developer's forum, this exact issue was reported in September 2014 (so 9 months before this review) and obviously hasn't been corrected.

You gain re-tries or puzzle skip options by finding film for your camera, which are picked up in a kind of whack-a-mole game. This comes down to a boring grind every so often, and they appear at random from the map, so expect to spend a while waiting on the map screen until the game decides to gift you with the option.

The puzzles and storyline don't get any more interesting than the first chapter, and only get a little more challenging as the game progresses.

In summary, if you get it for free, it's an okay way to spend an hour or two. I wouldn't buy it, and I won't be playing it again.
Read more
Report abuse

Paula H
3.0 out of 5 stars Fun for a while
Reviewed in the United Kingdom on 8 November 2014
Verified Purchase
Lots to like (graphics, Paris setting, long game) but spoiled by rambling, unnecessary dialogue and the repetitive nature of the puzzles. Many of the puzzles are text-based multiple choice questions on general knowledge or logic, and you'll need to be good at maths. Or you can skip the hard puzzles if you're good at 'catching' little film icons that flash up for a second. You need to catch a lot of them, though.
Read more
Report abuse

yvonne woodcock
5.0 out of 5 stars C`est fantastique!!
Reviewed in the United Kingdom on 11 October 2014
Verified Purchase
If you are a fan of the Professor Layton series you are going to love this.Some fiendish brain bogglers with a mix of easier puzzles that will advance you through an interesting story.Make sure you have someone who can help you out when your brain freezes.
Well done Amazon for making this free app of the day,the best for a while!
Read more
One person found this helpful
Report abuse
See all reviews
Amazon Appstore Return Policy
Back to top
Get to Know Us
Make Money with Us
Let Us Help You
And don't forget:
© 1996-2021, Amazon.com, Inc. or its affiliates