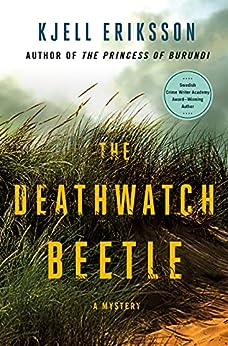 by Kjell Eriksson (Author) Format: Kindle Edition
See all formats and editions
Sorry, there was a problem loading this page. Try again.

Kjell Eriksson's next Ann Lindell book, The Deathwatch Beetle is an atmospheric thriller and a tender depiction of the countryside and the people of Roslagen.

Four years have passed since Cecilia Karlsson disappeared from the island of Gräsö in Roslagen. When Ann Lindell receives a tip that she has been seen alive she cannot help getting involved, even though she is no longer with the police.

The black sheep of the island, Nils Lindberg, has never forgotten Cecilia Karlsson, with whom he was in love as a teenager. And he carries a secret. He may not be completely sober all the time, but he has no doubt of what he saw out on the bay just before Cecilia disappeared. Cecilia's parents are desperate, not knowing what happened to their daughter. Yet their silent house contains many things that have been left unsaid.

While Ann struggles to put the jigsaw puzzle together, she is trying to establish herself in her new life together with her lover Edvard who, like herself, is marked by life. At the same time, someone is hiding in a cottage in a remote part of the island. Someone who is looking for revenge...

Excellent...Eriksson effectively portrays Sweden in the throes of change, being eroded from the inside out like the destructive insect of the title, while exploring social class, family, and, above all else, how men treat women. The plot slowly and steadily builds to a genuinely shocking denouement. Fans of literary fiction will be equally rewarded.--Publishers Weekly (starred review)

Top-notch Scandinavian noir and a welcome addition to the series. --Kirkus Reviews --This text refers to the hardcover edition.

KJELL ERIKSSON is an award-winning and internationally bestselling Swedish author and gardener, now living in Brazil. --This text refers to the hardcover edition.

KJELL ERIKSSON is an award-winning and internationally bestselling Swedish author and gardener, now living in Brazil. --This text refers to the hardcover edition.