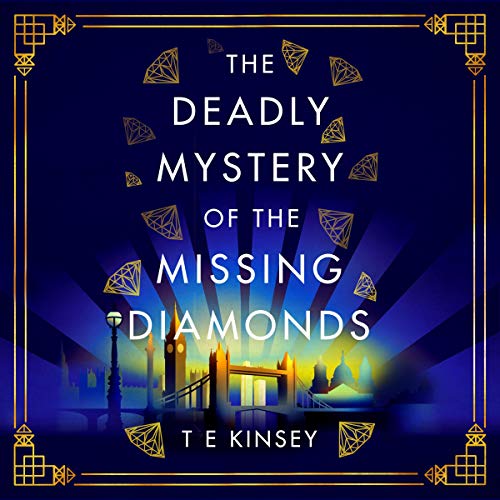 The Deadly Mystery of the Missing Diamonds: A Dizzy Heights Mystery, Book 1

4.0 out of 5 stars
4 out of 5
5,411 global ratings
How are ratings calculated?
To calculate the overall star rating and percentage breakdown by star, we don’t use a simple average. Instead, our system considers things like how recent a review is and if the reviewer bought the item on Amazon. It also analyses reviews to verify trustworthiness.

Lancashire Lad
TOP 1000 REVIEWER
4.0 out of 5 stars A fun read
Reviewed in Australia on 16 March 2021
Verified Purchase
As a spin off of the lady Hardcastle mystery it has the same easy to read style. The plot was well thought out and the solution was credible. However I felt that tainting a good British Crime with American culture influence rather spoilt it for me. No doubt Mr Kinseys publisher sees this American involvement as a way to sell more copies in the United States. Whether I read another book in this series I am not sure but will definitely read further adventures of Flo and Lady Hardcastle.
Read more
Helpful
Report abuse

reader
3.0 out of 5 stars Failed to live up to my expectations
Reviewed in Australia on 26 March 2021
Verified Purchase
I did not think the plot was particularly gripping. I really enjoy the Lady Hardcastle series of books and particularly the narrative by Flo Armstrong or strong arm by Kinsey. This book did not excite me and I hope it does not mean there will be no more Lady Hardcastle books.
I thought the story was quite laboured and failed to flow. Having said that I will still buy the next book as dome parts of this books plot were good and perhaps the characters will become familiar and enjoyable.
Read more
Helpful
Report abuse

Brett Turner
4.0 out of 5 stars Entertaining, good mystery
Reviewed in Australia on 24 February 2021
Verified Purchase
I enjoyed this book, a good mystery with lots of clues but not an obvious solution. I don't like books that refer to other stories in a series, it just irritates me, it might not others. This book has lots of references so that is why it is not a 5 for me
Read more
Helpful
Report abuse

Lesley McGovern
5.0 out of 5 stars Will be another brilliant series
Reviewed in Australia on 19 April 2021
Verified Purchase
This is a spin-off from the brilliant Lady Hardcastle series.
Loved this just as much as those books and can't wait for the next one.
If you like mysteries set in the 1920s, with humour and great characters, you'll love this.
Read more
Helpful
Report abuse

grmcc
3.0 out of 5 stars a silly story
Reviewed in Australia on 28 February 2021
Verified Purchase
just something to read when lying in bed but a stupid tory and don't understand why was ever published. not for me.
Read more
Helpful
Report abuse

Gerri
5.0 out of 5 stars For lovers of The Jeeves type of book
Reviewed in Australia on 24 February 2021
Verified Purchase
A very well written book with a great plot. Very easy to read and for lovers of P. G. Wodehouse a fresh supply of mid 20th Century humor.
Read more
Helpful
Report abuse

Lacey
4.0 out of 5 stars A pleasant read
Reviewed in Australia on 23 February 2021
Verified Purchase
Good book to meander away some hours. Found the writing to branch off on a bit of a “journey” at times, so only 4 stars.
Read more
Helpful
Report abuse

Amazon Customer
4.0 out of 5 stars Murder mystery and Jazz!
Reviewed in Australia on 5 March 2021
Verified Purchase
This is another fun, easy read from the Lady Hardcastle series. I enjoyed the return of the Jazz musicians from previous books and the playful banter the characters carry on with. A good read.
Read more
Helpful
Report abuse
See all reviews

Cicero
5.0 out of 5 stars A paradiddle of a read.
Reviewed in the United Kingdom on 4 February 2021
Verified Purchase
As someone who has played in a band, or two, the banger between the rhythm section was identifiable. As was the drummer taking ages to set up his kit, and no one offering to help him afterwards.

The description of the Club, and other places, rings true. The book intrigued me enough to read others by the same author.
Read more
19 people found this helpful
Report abuse

Tracey
5.0 out of 5 stars The Deadly Mystery of the Missing Diamonds
Reviewed in the United Kingdom on 5 February 2021
Verified Purchase
It is 1925 and Superintendent Sunderland asks Skins and Barty for their help. He wants them to track down a deserter from the war who got away with a large amount of diamonds.
I so loved this book. I thoroughly enjoy T E Kinsey 's Lady Hardcastle novels and this one is every bit as good. Full of familiar faces this book is a dream.
The story is really good and there are plenty of twists and turns as Skins, Barty, Ellie and the rest of the Dizzy Heights try to sort out the truth.
If you have never read any of the Lady Hardcastle it really doesn't matter. This is a book to sit down with and enjoy.
Highly recommended.
Read more
17 people found this helpful
Report abuse

Galaverna
4.0 out of 5 stars Fun, light story set in 1925 era London
Reviewed in the United States on 2 February 2021
Verified Purchase
I haven't finished this yet but as there are no reviews yet I thought I'd write a few lines to aid anyone trying to decide on their First Reads choice...
So far the story seems a bit all over the place... But it has potential. At this point there seem to be a great deal of unnecessary details and background, instead of just jumping into the action, but with a mystery all that could actually end up being important. There is a lot of dialogue, which I generally like but I kind of feel the author is trying a little too hard to mimic Roaring Twenties British slang and it doesn't always flow as well or naturally as novels actually written during that time.
However if the other choices don't seem your cup of tea, this is a fun, light choice. It may not be the caliber of Agatha Christie or Dorothy Sayers but it's a noble attempt at a story set in 1920's England. I will update once I've finished the book.

2/3/2021 Update: This is a light, entertaining story, but not much of a mystery. It's heavy on snappy dialogue, very sparse on clues, detecting or investigating. If you go into the book looking for a light escape it's enjoyable enough but true mystery fans will be disappointed. It's more a story of a group of musical friends in the 1920s who stumble into a diamond theft and consequently, a murder, but very little of the story actually has to do with these events. I also feel the random letters scattered throughout were unnecessary and added nothing to the advancement of plot.
That all being said, there are some fun moments, the 1920s London setting works well, and if you don't have high expectations for the mystery aspect, it's not a bad book. The author knows how to tell a decent story, just not how to write a good mystery. I looked back over the choices for this month and, even if this book doesn't stand out, I don't regret my choice or feel any of the others would have been better. 3.5 stars rounded up to 4.
Read more
415 people found this helpful
Report abuse

crafting mad
5.0 out of 5 stars Music, Mystery, laughter, and even the odd alpaca thrown in
Reviewed in the United Kingdom on 7 February 2021
Verified Purchase
Another great read from T E Kinsey. I've read the previous Lady Hardcastle books and loved them all. The Dizzy Heights Mysteries are a follow on from those, although you could start without reading those, I highly recommend you do read them, you get a feel for the main characters and their background.
There is always an element of humour in his books and happily no smut, or unnecessary descriptions of gore , as they dont need it. Main characters have lost none of their personality, that I came to love from previously mentioned series. I'm eagerly looking forward to the next book.
Read more
15 people found this helpful
Report abuse

Fiona
3.0 out of 5 stars Not quite in Lady H's league
Reviewed in the United Kingdom on 13 February 2021
Verified Purchase
I'm a big Kinsey fan, he writes with wit, panache and pace. So I expected more from Skins and co's story - at least some actual diamonds. It's jumped 12 years or more from Lady H and Flo's adventures, so there's a big gap, certainly in personal back stories (I think it's safe to assume we all know about WW1) although we do get tiny hints from Flo's letters. And I missed that - I like the gradual development, rather than a rushed and overloaded explanation of Ellie and Skins getting together, years previously.
The murder is a bit of a damp squib, as there doesn't seem to be much in the way of grief or raging at the loss of a dear friend. The method is clever, the setting is good but it's just not cohesive enough this time around - I felt as if I was reading a jolly jape rather than a thrilling mystery.
As ever though, the dialogue is sparkling and funny, although there is an awful lot of it. I wanted a bit more about the peripheral characters, and that was lost really. Even good old Inspector Sutherland was an also ran, and don't get me started on how his intervening years were written off in a single sentence.
Mr Kinsey, you're a brilliant writer with an eye for the foolish, the farcical and the absurd combined with the style to get that across to your dear readers. But this needs a bit more work, a bit more polish and a bit more depth. In my very humble opinion.
Read more
15 people found this helpful
Report abuse
See all reviews
Back to top
Get to Know Us
Make Money with Us
Let Us Help You
And don't forget:
© 1996-2021, Amazon.com, Inc. or its affiliates