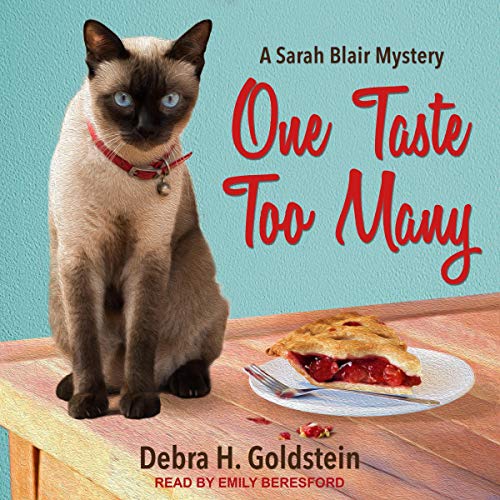 One Taste Too Many: A Sarah Blair Mystery, Book 1

Jae
3.0 out of 5 stars Not a bad book, but nothing exceptional about it, either.
Reviewed in the United States on 19 January 2020
Verified Purchase
Married young and divorced ten years later, Sarah is now living in a small, studio apartment and working as a receptionist for a local lawyer. The only bright spot in her life is RahRah, the Siamese cat she inherited from her late mother-in-law. On the other hand, Sarah's twin sister, Emily, is an up-and-coming chef at a local restaurant, called Southwind. Emily is excited for the upcoming expo at the Civic Center, because there will be a cooking contest, and she aims to win. Sarah is excited for her sister, but the euphoria comes crashing down when Sarah's ex-husband, Bill, dies at the Civic Center, late at night, and the only other person there was Emily. Determined to prove her sister did not kill her ex, Sarah starts looking into things, much to the dismay of police chief Peter and Harlan, the attorney Sarah works for. Not helping matters is when Jane, Bill's latest main squeeze, outright accuses Emily of killing Bill, then insists that RahRah belongs to her. Sarah soon learns that her mother-in-law left a sizable stipend to whoever was the caretaker of the cat--a stipend she hasn't seen a penny of since adopting RahRah.

Things get really messy when another person is murdered, and Emily is once again the only one discovered at the scene, someone else tries to sabotage the Southwind chefs by cutting the cord to their refrigerator at the Civic Center, and the restaurant itself catches fire. Sarah is at a loss, wondering whom she can trust. The only thing she knows for certain is that her sister is not a murderer, and that Jane doesn't deserve RahRah.

The story had a lot going on, and the narrative wasn't very smooth. All of the action takes place over the course of a long weekend, so things certainly clipped along at a fast pace. Characterizations weren't as realized as I would have liked, but it's the first in a series. Not a bad book, but nothing exceptional about it, either. Average score.
Read more
10 people found this helpful
Report abuse

Amy
4.0 out of 5 stars Fun start to a new series
Reviewed in the United States on 15 March 2019
Verified Purchase
This is the first installment in the Sarah Blair series. She is working at a law office and living with her beloved Siamese cat, RahRah. When Sarah's twin sister Emily returns home, Emily takes a chef's job and is immediately suspected of killing her former brother-in-law, Sarah's ex-husband Bill. Emily and her co-workers are in a food competition at the exposition center. Just as Sarah's boss is working to get Emily cleared of Bill's suspicious death, Emily finds herself at the center of a homicide. Meanwhile, Bill's new will brings more problems for Sarah as his new girlfriend supposedly has a legal claim to RahRah. Who can she trust? Will trusting the wrong person leave her the killer's next victim?

The setting was a fresh twist on the usual restaurant setting for a food cozy. The book was well-written and the plot had surprising twists, especially towards the very end. The pacing was a bit off for me about a third of the way through but I am glad I continued on because it picked back up nicely. I usually have some idea of the killer's identity but this one was a huge surprise. I really loved RahRah; the cat had such a presence throughout the book. I could also empathize with Sarah's heartbreak at the possibility of having to lose him due to legal wrangling; I went over six months without seeing my now deceased cats while my ex-husband stalled in court and kept "the boys" from me. I look forward to seeing where this series goes in the next installment.

Thanks to the author and the Cozy Mystery Review Crew for a complimentary copy of this book. My review is voluntary.
Read more
9 people found this helpful
Report abuse

J. Alter
5.0 out of 5 stars Murder at a food exposition
Reviewed in the United States on 10 January 2019
Verified Purchase
How do you feel about rhubarb? Sarah Blair's ex hated it and yet he was found dead with rhubarb on the fork in his hand. That's the start to a twist on culinary mysteries, one that involves a food exposition, an upscale restaurant, urban development, one special cat, and a heroine who is a disaster in the kitchen. Sarah's twin, Emily, however is a trained chef, magic in the kitchen, and when she's accused of murder, Sarah is so anxious to defend her that she even gives a cooking demonstration. Jell-O and pineapple, anyone? Deaths and near-misses continue and red herrings abound. You'll never suspect who the villain is until the last-minute revelation. Well done, fun to read.
Read more
11 people found this helpful
Report abuse

Tari H.
5.0 out of 5 stars Food expo and murder, a cat custody dispute and questionable partnerships
Reviewed in the United States on 16 March 2019
Verified Purchase
I really loved this first book in a new series, so many cool twists and possible suspects! I definitely had the wrong person pegged as the killer and never saw it coming until the reveal. This book was so good that it had me doubting some people that I probably should trust. I loved that Sarah (like me) was a Perry Mason fan and based some of her sleuthing on what would Perry or Paul do, lol.

Sarah and her twin Emily were different as night and day when it came to personality and talents. But at least Sarah got to pinch-hit for Emily (who was main person of interest in the murder of her ex brother-in-law) by doing a pretty funny stand-up telling about recipes that the cooking-challenged in the world like to use.

If Bill hadn't been dead from the get-go, he'd have been on my list of people I hoped would be offed. The author did a great job of painting him as real jerk. The other person mentioned who was already dead was actually a favorite character if that's possible, Bill's mom aka Mother Blair. Sarah talked about her so much and the great relationship they'd had, it was almost like she was right there. She'd originally adopted RahRah and when she died, she wanted her beloved cat to go to Sarah.

As far as living characters go, I liked Harlan a lot. He was such a nice boss and incredibly patient with Sarah and all the running off she seemed to do because of helping at the Food Expo. He was just a decent human being, since he was helping a cooking student as well as doing pro bono work without complaining. I'm kind of hoping there's a future for Sarah and Harlan along the way as something more than boss and employee. Emily was a fun, free spirit and a seriously talented chef with great people skills. It was cool how each twin sister had her own separate qualities that made up their duo--I got a kick out of hearing some of their escapades as kids. I'm really anxious to read the next installment when it releases in September, so I will be preordering!
Read more
7 people found this helpful
Report abuse

5.0 out of 5 stars Wonderful debut
Reviewed in the United States on 1 January 2019
Verified Purchase
In this entertaining debut of a cozy mystery, twenty-eight-year old Sarah Blair, had it all. Until her rich husband divorced her and she went from luxury to a cramped apartment and a job as receptionist at Law Firm. She moved Birmingham, to the small town of Wheaton, Alabama. Everything is as it should be until her ex husband turns up dead, and her twin sister Emily ,a chef, is the prime suspect. It is very good and well written for a debut novel. The mystery was great too and I like the characters
Read more
5 people found this helpful
Report abuse
See all reviews
Back to top
Get to Know Us
Make Money with Us
Let Us Help You
And don't forget:
© 1996-2021, Amazon.com, Inc. or its affiliates