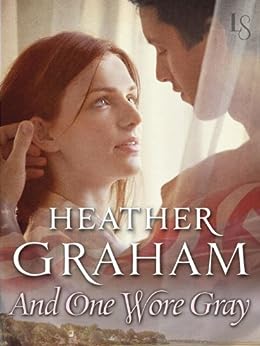 New York Times and USA Today bestselling author Heather Graham majored in theater arts at the University of South Florida. Her first book was published by Dell, and since then she has written more than one hundred novels and novellas. Married since high school graduation and the mother of five, Graham asserts that her greatest love in life remains her family, but she also believes that her career has been an incredible gift. Romance Writers of America presented Heather Graham with the RWA Lifetime Achievement Award in 2003. --This text refers to the mass_market edition.

4.7 out of 5 stars
4.7 out of 5
69 global ratings
How are ratings calculated?
To calculate the overall star rating and percentage breakdown by star, we don’t use a simple average. Instead, our system considers things like how recent a review is and if the reviewer bought the item on Amazon. It also analyses reviews to verify trustworthiness.

MK
5.0 out of 5 stars Great second book in the trilogy.
Reviewed in the United Kingdom on 23 May 2014
Verified Purchase
This book follows Daniel, the second Cameron brother and his tempestuous love affair with Cally. A really good story line following his adventures as a gallant cavalry officer and Southern gentleman. Loved it.
Read more
Report abuse

july
5.0 out of 5 stars JUST SO BEAUTIFUL !!!
Reviewed in France on 6 May 2011
Verified Purchase
What a great romance between Callie Michaelson and Daniel Cameron, again during the Civil War in the US, and full of action, that I'll not describe it here, just to keep the mistery and to incite your curiosity (I hope). Anyway, in my opinion this book and "One wore blue" are the most beautiful that I have read, and I tried many others before. For sure they are the keepers that I'll always recommend!
Thanks Amazon wherever you are, to have these books, not easy to find !

April Lee
2.0 out of 5 stars Warr was good Love was not
Reviewed in the United States on 6 November 2020
Verified Purchase
I expected something big in this book for it being the second part to the first one that I read, which was really good. This one was not what I expected at all.
The whole first part of the book was filled with tedious long dragging arguments between the main characters that bored me.
I didn't like the conflict or demands from the main characters. It wasn't really a love story it was more of a forced love. The war was written well but the love story was not. It was lacking in every aspect that love could be lacking. A bunch of mental abuse and verbal abuse was observed through the whole book. The love story was farfetched is what I'm getting at.
I only gave it two stars because the war story was good. The war was better than the love story.
Read more
Report abuse

This is Daniel Cameron's story and begins in 1863 as a young Yankee widow in Sharpsburg, Maryland, Callie Michaelson, looks out on a field of battle--her front lawn--to see dead and dying boys in blue and gray. And she remembers the officer in gray she met a year before...Daniel, the father of her 2-month old baby. The story then unfolds through Callie's flashback.

Daniel and Callie fell in love the first time they met and came together in great passion in the midst of war, she a Yankee and he a Confederate officer. When he is captured by the Yankees and sent to their prison, he blames Callie for betraying him. He escapes prison to return to his regiment and it takes him a year to get back to Sharpsburg. There is little trust between Daniel and Callie, even when he finds out she has given him a son. Neither will admit they still are very much in love.

Like "One Wore Blue," you will laugh and you will cry, as you become a part of the war that tore apart a nation and tore apart families...a time that shaped our nation. Graham has done a superb job of bringing that history to life while continuing the generational saga of the wonderful Cameron men.

She has produced a series of keepers--all 5 star romances! I highly recommend them. Here's the whole Cameron Saga:

-Sweet Savage Eden (England and the first settlers in Virginia)
-A Pirate's Pleasure (the pirates of the Caribbean and Virginia)
-Love Not a Rebel (the Revolutionary War...and Virginia)

Kindle Customer
5.0 out of 5 stars Great Seriea
Reviewed in the United States on 25 June 2021
Verified Purchase
This has been a great series that I hate to see come to an end. This gives you a taste of what living thru the American Revolution and the Civil War was like for the people who fought the wars as well as what it was like for the citizens who also lived thru this time period.
Read more
Report abuse
See all reviews
Back to top
Get to Know Us
Make Money with Us
Let Us Help You
And don't forget:
© 1996-2021, Amazon.com, Inc. or its affiliates