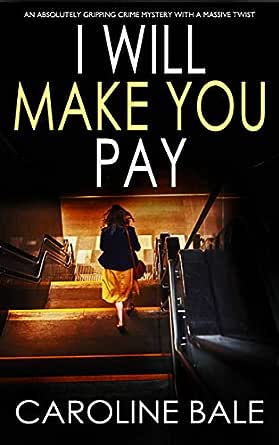 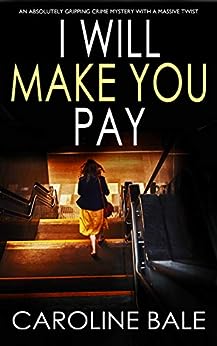 Meet Detective Ellen McClure as she takes on a vicious killer who loves playing games.

He is watching Connie Taylor in the café. He has befriended the waitress over the previous months and gained her confidence. Her coarseness disgusts him and he muses to himself about pouring acid on her face. He is going to torture Connie that evening to get the final information he needs and then he will kill her.

Connie Taylor’s head is found on the doorstep of a house in upmarket Heworth Green in York.

DI Ellen McClure finds herself embroiled in a complicated murder investigation that pits her against colleagues and family. Her boss thinks that ex-prostitute Connie was killed by one of her former clients, but Ellen thinks there is more to it.

Vicky is on the run with her five-year-old daughter, Kallie. Her life is in danger.

ELLEN MUST FIND HER BEFORE HE DOES.

Desperate to save Vicky, Ellen drags her own young daughter, Zoe into the path of a deadly psychopath who will stop at nothing on his murderous rampage.

A RACE AGAINST TIME TO STOP A PSYCHOPATH ON A MISSION

What readers are saying about I WILL MAKE YOU PAY

“The action was never-ending and the guessing never stopped.” Deborah

“A really super book that I couldn’t put down.” Viv

“Plenty of twists and turns to keep you guessing.” Nerys

THE DETECTIVE
DI Ellen McClure is a 38-year-old detective with an outstanding record who will stop at nothing to protect the innocent. She has recently left her cheating husband, Anthony, and is making a new start for her and her 13 year old daughter Zoe in York, the city she grew up in. She is arriving at her new posting on the North Yorkshire Serious Crimes Team under a cloud having given evidence against a superior in her previous posting. Her tenacious approach and confrontational style often work against her, pitting her against colleagues and family. In contrast, her DC, Sarika Kaur is an empathic, thoughtful officer, who tries, often without success, to be the voice of reason.

THE SETTING
York has been occupied by everyone from the Romans to the Vikings which shows in the city’s cobblestone streets, half timbered houses and 18th-century flat-fronted townhouses. Diagon Alley where Harry Potter buys his wand was inspired by the Shambles, a medieval butcher’s street visited by the film’s set designers and which is now thronged with tourists. Six hundred years ago, bloody hunks of meat hung on shopfronts, dripping into the gutter that still runs along the middle of the lane. Then, of course, there is the magnificent York Minster, Europe’s largest gothic cathedral which looms over a warren of streets running down to the River Ouse with its many colourful barges and tour boats. The river cuts the city in two and flows eastwards into majestic countryside and onwards towards the North Sea.

The Author
Caroline Bale is a practicing psychotherapist who draws on her work to create believable plots and complex characters. She believes the draw in books like hers is that they allow us to address our worst fears from the safety of our own bedrooms. The heart-pounding terror of walking down a deserted street alone at night or the inability to go to sleep until a beloved teenager has finally arrived home. She is interested in what motivates a person to torture or kill another human being, what psychotherapists call the shadow side of human nature. Her books are full of complex, often charming characters with personality disorders and disturbed histories. The psychopaths amongst us with the killer smiles.

Cardinal
TOP 500 REVIEWER
4.0 out of 5 stars Good debut
12 September 2019
Format: Kindle EditionVerified Purchase
An excellent start by this author. An interesting story where the bad guys are exposed and the work flows at a good pace.

Caroline Bale is now on my list of "must read" authors

Fiona Wilson
5.0 out of 5 stars Good read on a few levels.
5 January 2020
Format: Kindle EditionVerified Purchase
I really enjoyed this book. Always love a psychological thriller but the relat6between father and son and mother and son was nicely written. Will try this author again.
Read more
Helpful
Comment Report abuse

Sheryl Sinclair
5.0 out of 5 stars Great read from the beginning
4 August 2019
Format: Kindle EditionVerified Purchase
I will be on the lookout for her books in future. From start to end is was on point.
Read more
Helpful
Comment Report abuse

I love books
TOP 1000 REVIEWER
5.0 out of 5 stars Brilliant debut I am looking forward to more from this author
29 June 2019
Format: Kindle Edition
This is a debut by a new author to me but I do love to find new authors there is always a bitter sweet moment: 'will I like it or not?'

The book begins steadily but it is worth bearing with it as we learn the background to a very complex story.

Ellie is a feisty character willing to be outcast by her colleagues in her quest to see justice done. She has moved to York and is trying to put the pieces of her life back together after the breakdown of her marriage and the aftermath of a very difficult case. She is trying to juggle a demanding job with being a single parent when the call comes in that makes her life a whole lot worse.

Although there are several other characters it is Ellie that the story focuses on as the reader is taken on a journey through a story with corruption, abuse, psychopaths, lies, jealousy and murder that is not for the faint hearted. This is an intriguing story that builds in pace gradually all the way to an ending I certainly didn't see coming.

The story begins way back with 2 girls who are groomed by a rich businessman. This sets in motion a string of events that sees a woman running for her life and begs the question: 'what wouldn't you do to save your child?'

I am looking forward to more from Caroline.

Thank you to Joffe Books & Netgalley for the digital ARC. These are my own, unbiased thoughts and opinions.

Simon
5.0 out of 5 stars Great debut
5 July 2019
Format: Kindle Edition
This is a brand new book, from a debut author, so I was a bit wary about reading it, but I needn't have been as it is a great story.
The story follows DI Ellen McClure as she is given lead on the investigation of a murdered former prostitute who's head was dumped on a door step of a house in York.
For a debut novel this works very well with the action kicking off from the start and then dipping and rising again as you get through the book, leading up very nicely to the big finish.
The book main characters have great back stories, although I am not sure how realistic it is having a DI who disobeys rules and procedures as much as Ellen does, as far as I know if you break all the rules and are as much of a renegade as she is then you wouldn't be picked for the DI role. Apart from the characters are very well developed and believable, with the plot line running along very well with no holes in it, although the beginning is very gruesome.
Overall this is a brilliant debut and I really cannot wait for book two to come out as it kept me hooked and the ending was unexpected and brilliant.

Go to Amazon.com to see all 17 reviews 4.5 out of 5 stars
Get FREE delivery with Amazon Prime
Prime members enjoy FREE Delivery and exclusive access to movies, TV shows, music, Kindle e-books, Twitch Prime, and more.
> Get Started
Back to top
Get to Know Us
Make Money with Us
Let Us Help You
And don't forget:
© 1996-2020, Amazon.com, Inc. or its affiliates