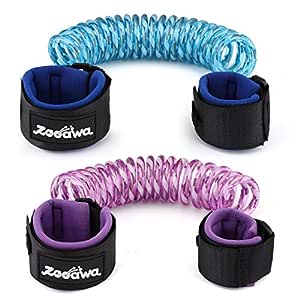 Help resolve parents' worry about traveling with children at crowd!

Connect your children to you with an elastic, durable and comfortable rope. Let kids have more fun during journey without compromising their safety!

Caution:
1. In order to prevent the kids from running away before you, we suggest that parents should wear wristband first, next the kids wear it.
2. Zooawa Anti Lost Wrist Link is only used to keep the kids from losing which CANNOT prevent the kids from falling on the ground or be used for training to walk.
3. This link has the elasticity. It will have a mutual pull between kids and parents when wearing it. So when going out, parents should keep following the kids closely to avoid the pull making kids lose balance and fall.

Ashley Davis
4.0 out of 5 stars I thought it'd be nice to have some for when we go to crowded ...
24 October 2017 - Published on Amazon.com
Verified Purchase
A friend of mine bought some of these from a different seller, and after she showed me some of the features they have, I thought it'd be nice to have some for when we go to crowded events with the kids. However, the ones that she showed me, while they looked identical to these, were actually much different for a variety of reasons. Ultimately, these ones were a few dollars cheaper, so for that reason, I can't harp too much; however, the ones my friend had purchased had a rotating piece where the spring connects to the arm band so that they wouldn't get wrapped up or tangled when in use. Also, the ones she had purchased had a double Velcro feature for the child's bracelet, so they weren't as likely to remove it themselves/it would be harder for an attacker to remove (one Velcro strip went around the wrist, and the other went in the opposite direction over that one). Lastly, the other ones seemed to have a longer extension than these.
On the plus side these are extremely durable. I put the child bracelet on and my husband pulled as hard as he could to test the Velcro and see if it would hold, and it did...plus some! Also, like I mentioned, they were slightly cheaper, I believe I paid $12 for a set of one pink and one blue one. & Lastly, they work! That's all that really matters, right?! As much as I was hoping these would have the features I listed above, they are still a great deal for what you get, and I can't complain too much! I'd recommend these to someone looking for that extra level of protection for their children....I've always been against using a "leash" for children, but with things getting as bad as they have been, it's nice to have the option for my kids to be able to run freely, while still keeping them at a safe distance. I feel like these are much less restricting than the leashes or backpacks, and with me wearing one as well, it doesn't seem as dominating as the alternative options. Honestly though, if it saves your kids life, it's well worth the criticisms!
Read more
36 people found this helpful

JANINE K. HAYNES
5.0 out of 5 stars Amazing
21 December 2018 - Published on Amazon.com
Verified Purchase
Excellent product! I purchased this after my 3- year- old ran off in Target and I didn't notice until she was walking by hand in hand with a couple, towards the door.😱 This nifty little gadget keeps my girls close by my side and they actually enjoy wearing it
Read more
20 people found this helpful

Crystal
5.0 out of 5 stars Such a big help for a momma with a toddler & baby!
13 January 2019 - Published on Amazon.com
Verified Purchase
Used this for my daughter’s Disney trip and it was a complete success! Gave me so much security knowing that she can’t wander off! I have an 8month old and so many times it’s hard to keep my daughter (2.5 yr old) in the stroller or sitting while I tend her my son. This was so perfect for strolling him and letting her walk on her own while she’s in arms distance at all times! Biggest help! Love this and highly recommend! Side note: there were times she did want to take it off, but after having it on for 20min or walking around I’d say she did well and would get to run around in the play area and then would voluntarily put it back on☺️
Read more
13 people found this helpful

Misty
5.0 out of 5 stars Keeping the kids intact
3 April 2019 - Published on Amazon.com
Verified Purchase
I love this product! My son first didn't want this on his wrist, now he puts his wrist out so we can go out. I will say of course it puts out a great distance, and not recommended in parking lots and near streets unless the child knows better. All in all, great quality! definitely am going to order another set!
Read more

Mercedes M
5.0 out of 5 stars A life saver!
23 July 2019 - Published on Amazon.com
Verified Purchase
The very first time we tried these out it went a bit shaky, but the next few times both my daughter and I were happy with these. They are easy to put on and comfortable to wear. I can give my daughter the sense of Independence she likes when walking while being able to direct her and keep her from getting into anything or wondering too far away from me. It's very easy and convenient, especially for any parent who is out alone with their toddler!
Read more

10 people found this helpful
Go to Amazon.com to see all 345 reviews 4.3 out of 5 stars
Get FREE delivery with Amazon Prime
Prime members enjoy FREE Delivery and exclusive access to movies, TV shows, music, Kindle e-books, Twitch Prime, and more.
> Get Started
Back to top
Get to Know Us
Make Money with Us
Let Us Help You
And don't forget:
© 1996-2020, Amazon.com, Inc. or its affiliates