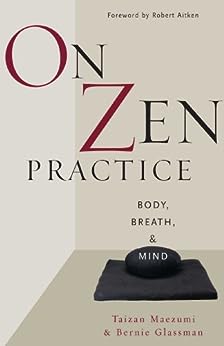 "An American classic. Delicious and nourishing spiritual food to enrich our practice."--Taigen Dan Leighton, author of Faces of Compassion

""On Zen Practice" is not just a manual on Zen training but an invaluable guide to personal transformation."--John Daido Loori Roshi, abbot of Zen Mountain Monastery and editor of The Art of Just Sitting

"This beautiful book is a rich weave of wisdom, practicality, and heart."--Joan Halifax Roshi, head teacher of Upaya Zen Center

"On Zen Practice is not just a manual on Zen training but an invaluable guide to personal transformation."--John Daido Loori Roshi, abbot of Zen Mountain Monastery and editor of The Art of Just Sitting --This text refers to an alternate kindle_edition edition.

Hakuyu Taizan Maezumi (1931-95) was a Japanese Zen Buddhist teacher and roshi, and lineage holder in the Soto, Rinzai and Harada-Yasutani traditions of Zen. He combined the Rinzai use of koans and the Soto emphasis on shikantaza in his teachings, influenced by his years studying under Hakuun Yasutani in the Harada-Yasutani school. He founded or co-founded several institutions and practice centers, including the Zen Center of Los Angeles, White Plum Asanga, Yokoji Zen Mountain Center, and the Zen Mountain Monastery. Taizan Maezumi left behind twelve Dharma successors, appointed sixty-eight priests and gave Buddhist precepts to more than five hundred practitioners. Along with Zen teachers like Shunryu Suzuki-roshi, Seung Sahn Dae Soen Sa Nim, and Venerable Hsuan Hua, Maezumi greatly influenced the American Zen landscape. Several Dharma Successors of his-including Tetsugen Bernard Glassman, Dennis Merzel, John Daido Loori, Jan Chozen Bays, Gerry Shishin Wick, Charlotte Joko Beck, and William Nyogen Yeo-have gone on to found Zen communities of their own. Maezumi died unexpectedly while visiting Japan in 1995. Bernard (Bernie) Tetsugen Glassman is a dharma heir to Hakuyu Taizan Maezumi. He is the founder of the Peacemaker Circle, the famous Greyston Mandala and the Greyston Bakery (featured on 60 Minutes). He is author of Infinite Circle and, with Jeff Bridges, The Dude and the Zen Master. Robert Baker Dairyu Chotan Aitken Roshi (June 19, 1917 - August 5, 2010) was a Zen teacher in the Harada-Yasutani lineage. He co-founded the Honolulu Diamond Sangha in 1959 together with his wife. Aitken received Dharma transmission from Koun Yamada in 1985 but decided to live as a layperson. He was a social activist advocating for social justice for gays, women and Native Hawaiians throughout his life, and was one of the original founders of the Buddhist Peace Fellowship. He produced many Dharma heirs, including John Tarrant and Nelson Foster. --This text refers to an alternate kindle_edition edition.

Michael J Nilon
5.0 out of 5 stars Wonderful Primer for American Zen
Reviewed in the United States on 3 March 2019
Verified Purchase
This simple and profound book gives anyone a practical guide to American Zen. Maezumi influenced some of the teachers most responsible for socially engaged Buddhism in the US, and his teachings contain all the compassionate wisdom of finding our own true nature and learning how to serve others around us, including the world itself.
Read more
Report abuse
See all reviews
Back to top
Get to Know Us
Make Money with Us
Let Us Help You
And don't forget:
© 1996-2021, Amazon.com, Inc. or its affiliates