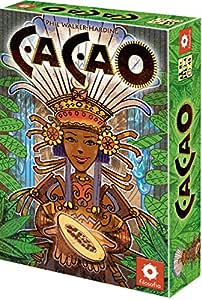 by Z-Man Games
4.7 out of 5 stars 31 ratings
Currently unavailable.
We don't know when or if this item will be back in stock.

Cacao immerses the players in the exotic world of the "Fruit of the Gods." As the chief of your tribe, you must lead your people to prosperity and glory through the cultivation and trade of cacao. Those who skillfully place their workers and wisely use the mighty power of the Gods will be richly rewarded.

brh
5.0 out of 5 stars Wonderfully streamlined and simple tile-laying game.
16 December 2016 - Published on Amazon.com
Verified Purchase
I'm a huge fan of tile-laying games, and while I consider Carcassonne to be the pinnacle of tile-laying, its mechanics are a bit unique and therefore atypical. Cacao feels a bit more typical - there aren't really restrictions on tile placement, and you have some choice of the tile(s) you play - but it's about as streamlined as Carcassonne is.

Others have explained the gameplay, but the quick summary is that you place a worker tile from your hand next to one or more jungle tiles on the table. As holes begin to form, you additionally fill them in with more jungle tiles, forming a checkerboard pattern of alternating workers and jungles. Each worker tile has four workers, distributed (seemingly) randomly among the four edges. As soon as a worker touches a jungle, it takes that action - acquiring cacao, selling cacao, earning free money (points), moving up what is essentially a bonus-points track, stockpiling workers near temples that will score at the game's conclusion, and collecting tokens that let you replace tiles during the endgame.

Aside from the temples, everything is very immediate and straightforward. While it could be argued that Carcassonne has a very light worker placement/resource management mechanic to it, Cacao does not at all. You will have four workers at your disposal every turn, and unused workers can still be activated if a jungle tile is placed next to them; there is no shortage of workers. You have a limited capacity for cacao and you have to sell it in order to get points, but that's not a resource mechanic so much as a two-part scoring mechanic. There's some amount of 'well do I use this tile edge with three workers to sell three cacao for two gold each now or hope a better market opens up', but that's really the game - it's all about the tiles.

All in all a quick game, fun game, you end up with a small 'world' compared to Carcassonne, easy to grasp and score. Components are all nice, the little player mats are charming, and the wooden cacao bits are great. The box is awful - you will be removing the insert to mine for gold if you ever travel with it or store it vertically. I also kind of wish they had used a scoring track instead of gold to make it easier to see where you stand vs. other players, but these are the pettiest of complaints.
Read more
12 people found this helpful

Seattlerain
5.0 out of 5 stars Fun tile laying game
6 July 2019 - Published on Amazon.com
Verified Purchase
If your family likes Kingdomino and you are looking for something similar but with more interesting choices then this is the game to get. Easy to learn and scales well at all player counts. Kids can play this with no issue and everyone will have fun. Good game.
Read more
One person found this helpful

Jess
5.0 out of 5 stars Fun and Strategic
8 June 2019 - Published on Amazon.com
Verified Purchase
Great tile placement game. Multiple ways to earn point and different strategies. Fun enough for two players, but I think it would be better with more.
Read more

J. Tieman
5.0 out of 5 stars Five Stars
17 May 2017 - Published on Amazon.com
Verified Purchase
Good good, pretty quick to learn and play. Good for kids (but not super little kids) too.
Read more
One person found this helpful
Go to Amazon.com to see all 26 reviews 4.9 out of 5 stars
Get FREE delivery with Amazon Prime
Prime members enjoy FREE Delivery and exclusive access to movies, TV shows, music, Kindle e-books, Twitch Prime, and more.
> Get Started
Back to top
Get to Know Us
Make Money with Us
Let Us Help You
And don't forget:
© 1996-2020, Amazon.com, Inc. or its affiliates