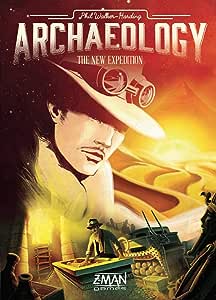 Brand: Z-Man Games
4.8 out of 5 stars 132 ratings
Secure transaction
Returns Policy
Amazon-managed Delivery
Your transaction is secure
We work hard to protect your security and privacy. Our payment security system encrypts your information during transmission. We don’t share your credit card details with third-party sellers, and we don’t sell your information to others. Learn more
Amazon-managed Delivery
Amazon manages delivery by using preferred couriers/agents. Order delivery tracking to your doorstep is available

In Archaeology The New Expedition, you are an archaeologist leading expeditions in search of lost relics. These artefacts lie hidden in the desert, but they belong in a museum. Luckily, the museum will pay you handsomely for whatever you deliver. Uncover shards of ancient pottery, valuable coins, masks of the Pharaohs and more during your excavations. You can sell each right away, but you can earn even more by delivering complete sets. Don't wait too long to sell, though or you might lose your discoveries to rival explorers or vicious sandstorms. The player with the most money when the Treasure deck runs out wins.

4.8 out of 5 stars
4.8 out of 5
132 global ratings
How are ratings calculated?
To calculate the overall star rating and percentage breakdown by star, we don’t use a simple average. Instead, our system considers things like how recent a review is and if the reviewer bought the item on Amazon. It also analyses reviews to verify trustworthiness.

StoicCynic
4.0 out of 5 stars Digging...well, tomb-raiding...for treasure.
Reviewed in the United Kingdom on 8 July 2016
Verified Purchase
Archeology - The New Expedition is a fun card game on the less complex end of the gaming spectrum, but with enough meat to make it rather interesting. In summary, you collect sets of treasure cards in order to sell them to museums. The more of a type of treasure you sell, the more money you get, and some treasure types are worth almost nothing unless you have several to sell. There are also map treasures which have an additional power - more on that later.

To help players with their set-collecting, there's a market of five cards on the table at the start of the game, and you can trade cards in and out of the market, priced according to trading values printed on them. On your turn, without revealing it to the others, you take (dig! :-) ) a card from the deck and look at it. If it's a treasure, you add it to your hand. If it's a thief, you show it, and steal a random card from someone else. If it's a sandstorm...bad news: you show it, and then *everyone* (including you) discards to the market half their hand, rounded down. You can - only once during the game - discard a special tent card you receive at the start, to protect your hand from a sandstorm.

After the digging, you may trade with the market, sell cards to the museum (place them in a set in front of you for scoring at the end), or explore one of the hidden chambers of the monument, one of six possible special buildings that is randomly selected during setup. To explore it, you surrender a certain number of map cards, and receive treasure cards from one of the chambers. The monuments' benefits are all different: with a couple, you just take a pile of cards dealt at the start. A couple have a push-your-luck element, one accrues cards as the game goes on, one lets you peek at its chambers when you sell to a museum....it all depends, but you'll only have one per game.

It chugged along nicely, each player's turn is quick but involves some fun decisions: I've got a few pot shards, I should keep collecting for a big score...but what if there's a sandstorm? I have a pharaoh's mask, but I need another, and I only have a couple of cards...should I wait to see if I can get it from the market...but what if someone thieves it from me...? I enjoyed it a lot: it's simple to teach, doesn't outstay its welcome, and scales well across all player counts.

Big Red
5.0 out of 5 stars Very good, enjoyable game. Simple, deep, atmospheric
Reviewed in the United Kingdom on 17 May 2016
Verified Purchase
Archaeology is a very good card game with simple rules and mechanics but lots of scope. It has some aspects in common with the excellent 2 player game Jaipur, so if you've played that this will seem partly familiar.

At its heart is set collection, with sets scoring varying amounts. Some items, such as shards, are only really of value in multiples, whereas Pharoah masks are valuable in their own right. The players can trade with the market of face-up cards, sell multiples to the museum or dig for more items. One thing I like is the dig site - chosen at random at the start of the game and influencing how the map mechanics work to gain further items. Some sites such as the Great Pyramid are straightforward but others like the sphinx offer some different challenges. This means that every game can feel different. The game works well with all numbers of players and scales well, with some cards only being used in a 4 or 5 player game.

I also like the sandstorm and thief cards. If drawn, they force players to place half their cards to the market and allow players to steal from each other. At the start each player has a tent card for avoiding one sandstorm.

The winner is the player who at the end of the cards has sold the most value to the museum. In some ways it's also a push-your-luck game - do I sell now or risk a sandstorm or thief for more items in my set?

The game is very atmospheric, has good artwork and good quality cards. It comes in a small box and so is portable.

Good fun, has scope for exercising the grey cells and is highly recommended.

@mistervaux
4.0 out of 5 stars Great Filler/Casual Game
Reviewed in the United Kingdom on 31 July 2018
Verified Purchase
Not the deepest or most strategic game of all time, but it's a brilliant filler game and is really 'pick up and play'. Lots of fun gaming here, including for people who aren't deep into board or card games. I'd put it into the 'gateway game' category alongside Carcasonne, Ticket To Ride or even Catan. Oh, and the art is LOVELY.
Read more
Report abuse

christopher stables
5.0 out of 5 stars great game
Reviewed in the United Kingdom on 2 May 2016
Verified Purchase
Excellent game. Always a winner with most people I have played with.
Read more
Report abuse