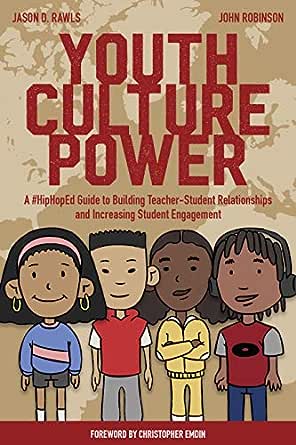 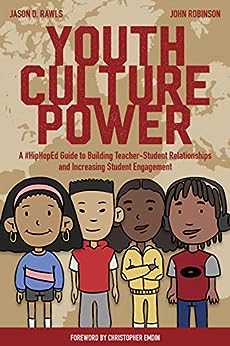 In our schools, hip-hop culture is the dominant culture among the students. In Youth Culture Power: A #HipHopEd Guide to Building Teacher-Student Relationships and Increasing Student Engagement, Jason D. Rawls and John Robinson, educators and hip-hop artists with experience in the urban classrooms, focus their efforts through Hip-Hop Based Education (HHBE). They argue that hip-hop culture could be useful in building relationships and building student engagement.

The approach to achieve this is Youth Culture Pedagogy (YCP). YCP is based in a foundation of reality pedagogy (Emdin, 2014), culturally responsive pedagogy (Ladson-Billings, 1995), and HHBE (Hill, 2009; Petchauer, 2009). In this volume, the authors lay the groundwork for YCP and how they envision its use within the classroom.

In Youth Culture Power, the authors put forth their C.A.R.E. Model of youth pedagogy to help teachers create a positive learning environment by building relationships and lessons around students’ own culture. Instead of forcing students to give up the things they frequent, Rawls and Robinson feel teachers should discuss them and when possible, use them in lessons. The purpose of this book is to present a fresh take on why educators should not discount the culture of youth within the classroom.

Jason D. Rawls is an educator for Columbus City Schools as well as adjunct professor at Tiffin University, Ohio University, and Columbus College of Art & Design. He holds an Ed.D. in educational administration from Ohio University. Additionally, he is an accomplished hip-hop producer, artist, and DJ, working with such acts as Mos Def, Talib Kweli, Beastie Boys, and Aloe Blacc and has released over 20 albums.

John Robinson is an emcee, producer, entrepreneur, and educator. He has released over a dozen albums and toured the world. As a record label president, he has expertise in social media, online marketing, and web development. He currently works in education as a teaching artist in New York City public schools. John is also a partner in CodeScty which uses original Hip-Hop music, animated videos, youth culture, and more to teach computational thinking skills to underserved youth.

Jay ARE is the hip-hop duo of Rawls and Robinson. The two met during the independent hip-hop era of the late 1990’s and formed the group after working on several projects together.Their first album, The 1960’s Jazz Revolution Again, was released in 2009. The album highlighted the history of jazz and its connection to hip-hop. Their second album, Youth Culture Power, coincides with this book as each song title matches a chapter in this book. While the book fleshes out the album with research, theoretical explorations, and autobiographical experiences, the album is intended to inspire, motivate, and entertain teachers, administrators, parents, and members of the community. The book and album introduce Jay ARE’s philosophy, Youth Culture Pedagogy, which is intended to strengthen teacher-student relationships and increase student engagement using youth culture as a catalyst.