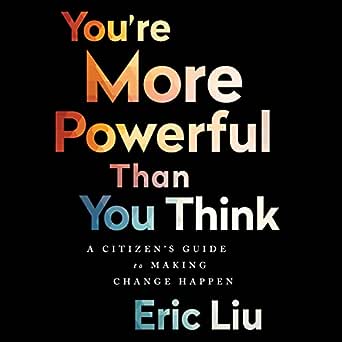 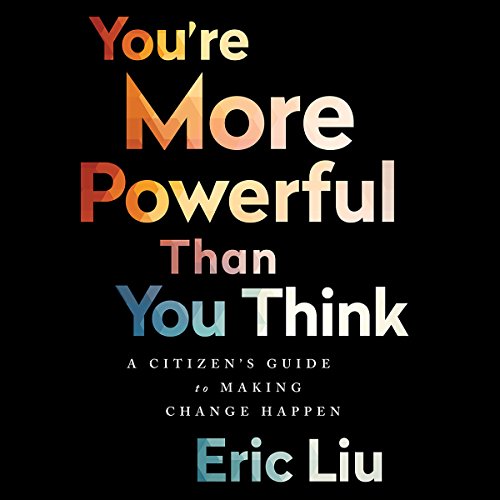 You're More Powerful Than You Think: A Citizen's Guide to Making Change Happen

G. Jackson
4.0 out of 5 stars Win the Battles But Lose The Country?
8 July 2017 - Published on Amazon.com
Verified Purchase
The author has fulfilled his objectives for this book admirably, but I am taking off one star for what he didn't address and would have been useful to include.
This book is about organizing and maneuvering for social-political change. It starts with a introduction to political theory and an overview of the forms of power. Then it presents 9 strategies for gaining power and prevailing on contested matters, with multiple examples of apparently successful applications of each strategy. The book is well organized and well written. The author forthrightly indicates his liberal leanings, but he cites some applications of the strategies by conservative causes.
My disappointment with the book is this:The author claims that political polarization in the country is the highest since the Civil War, and he worries about that, as do I, but then he advocates confrontational strategies with no discussion about how to use them without inflaming further polarization. Perhaps that is being saved for another book by this thoughtful author. If so, it will be worth reading.

LouiseSStonington
5.0 out of 5 stars 'fight the feeling of helplessness that gives rise to authoritarianism"
1 July 2017 - Published on Amazon.com
Verified Purchase
The problem, as the author explains, is that "the Federalist authors ...did not foresee how much a mass society - mass capitalism, mass government, mass elections - would make citizens believe themselves to be small and insignificant: unworthy of responsibility....We haven't truly enabled all the people of this society to participate in self-government to the fullest extent of their potential.....[O]ur job now is to challenge unearned privilege, to break apart monopolies, to deconcentrate power, to make the little citizen bigger, and to fithe the feeling of helplessness that gives rise to authoritarianism."
Eric Liu gives readers credible encouragement and an action plan, with nine different ways to help us create a safer, more efficient and inclusive society. "Change the game: Adjust the arena. Re-rig the rules. Attack the plan. Change the story: Describe the alternative. Organize in narratives. Make your fight a fable. Change the equation: Act exponentially. Act reciprocally. Perform your power.”
An example of changing the equation: “the Family Independence Initiative, which helps lift people out of poverty by giving “ families baseline funds - up to $200 for reporting small steps taken to reduce debt or get education or the like - and requires them to meet as a group at least monthly.” …Trusting the network to support each other…”
An example of changing the story is Bill McKibben's divestment campaign where young people challenge the visible authority of colleges, philanthropies and banks, calling on them to end their investment in fossil fuels.
Liu also describes how we can change the equation, by helping citizens become part of teams, practicing compassion, inclusiveness, resourcefulness and cooperation.
If you are ready to stop staring into the headlights, this is a book that will help you and your community mobilize for a better tomorrow.

Charly Carter
5.0 out of 5 stars Everything you wanted to know about Power
8 January 2020 - Published on Amazon.com
Verified Purchase
This book masterfully dissects the concept of Power and how it is used in our society. This should be a primer for anyone looking to fight city hall, or just fight for their rights whether in school, on the job, or in city hall.
Read more

Sylvia
5.0 out of 5 stars Motivating & informative
2 May 2017 - Published on Amazon.com
Verified Purchase
Great! Read by the author and very informative, especially the last CD. I will listen again.
Read more
One person found this helpful
Go to Amazon.com to see all 23 reviews 4.6 out of 5 stars
Get FREE delivery with Amazon Prime
Prime members enjoy FREE Delivery and exclusive access to movies, TV shows, music, Kindle e-books, Twitch Prime, and more.
> Get Started
Back to top
Get to Know Us
Make Money with Us
Let Us Help You
And don't forget:
© 1996-2020, Amazon.com, Inc. or its affiliates