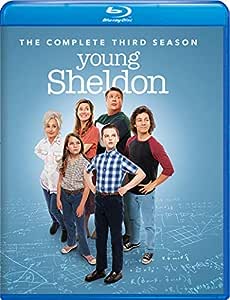 There is Normal Life. And Then There is Life with Young Sheldon. Is it normal to be smarter than your parents Or to have a brother who is more interested in his hair than his studies and a twin sister whose personality is the opposite of yours It is if you are Sheldon Cooper, the phenomenally gifted 11-year-old living in East Texas with his parents, George Sr and Mary; siblings, Georgie and Missy; and tough-talking, beloved Meemaw. Season Threes 21 hilarious episodes follow Sheldon as he tests the patience of his family, the proofs of his analytical theories and the limits of his knowledge of the real world. Whether he is taking a break from science to obsess about Hobbits or setting foot on the Caltech campus for the very first time, you will not want to miss a nanosecond of this boy genius' genuinely heartwarming boyhood.

Gis A. Bun
5.0 out of 5 stars The third season continues... very funny
Reviewed in Canada on 25 September 2020
Verified Purchase
A 21 episode season. Sheldon with his usual antics. George Jr is a "chick" magnet. Missy getting a bit wiser. Meemaw has three boyfriends during the season [Craig T. Nelson is one of them]. And Sheldon's parents are trying to cope with the kids in the 80s.
Just a 5.5 minute short featurette on coping with trying to find old technology and clothing from the early 80s.

Mike S.
5.0 out of 5 stars Continues to be great
Reviewed in the United States on 1 October 2020
Verified Purchase
Young Sheldon is, of course, the spinoff series of The Big Bang Theory, telling essentially weekly stories of Sheldon as a 10-year-old growing up in Medford Texas in the late 1980s. It is very different from the parent series in that it is not filmed in front of an audience and supplemented by a laugh track, it has more drama blended into it than BBT, and there are more long-running themes that are tied into the various weekly hijinks. Plus, there is the great 1980s soundtrack. And, it is narrated by Jim Parsons as adult Sheldon, which allows the show to drop hints of what happened to the character post BBT.

The show continues to be well written and acted, with all the various actors Iain Armitage, Zoe Perry, Lance Barber, Montana Jordan, Raegan Revord, and Annie Potts getting ample storylines devoted to their characters and knocking their performances out of the park. The show does a great job not just focusing on the character of Sheldon, but developing all of the characters and giving great material for all members of the very large ensemble cast. The big storyline for Sheldon in season three is whether (and where) he should go to college, as he does not find high-school challenging at all. This causes a lot of friction between Sheldon and his parents. Another standout storyline is Missy trying to get on a little league baseball team. That story introduces Craig T. Nelson as a recurring character in the show, as Missy's coach, Georgie's boss, and a potential love interest for MeeMaw. I will not go too much into the various storylines to keep from spoiling anything, but the themes this season are very good, and the show is definitely not getting stale.

For those who get the blu-ray, it is a basic MOD disc. There are captions and the shows do play in a play-all mode that allows you to pick up where you stop, even in the middle of an episode. The extras are very bare bones, just a short behind-the-scenes feature. So, if you only get the physical discs when there are a lot of bonus features, then you may just want to stick to streaming this. Overall, the show continues to be strong and is definitely worth checking out.

Ken
4.0 out of 5 stars Great show. Sad there’s no digital copy😩
Reviewed in the United States on 18 October 2020
Verified Purchase
Best season so far!! Very disappointed it didn’t come with a digital copy, but I knew that before ordering. Blu-ray quality was great! Fun show to watch with the whole family
Read more
Report abuse
See all reviews
Get FREE delivery with Amazon Prime
Prime members enjoy FREE Delivery and exclusive access to movies, TV shows, music, Kindle e-books, Twitch Prime, and more.
> Get Started
Back to top
Get to Know Us
Make Money with Us
Let Us Help You
And don't forget:
© 1996-2020, Amazon.com, Inc. or its affiliates