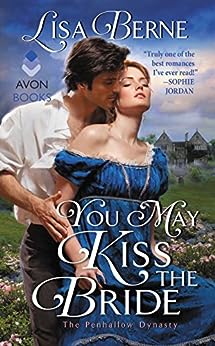 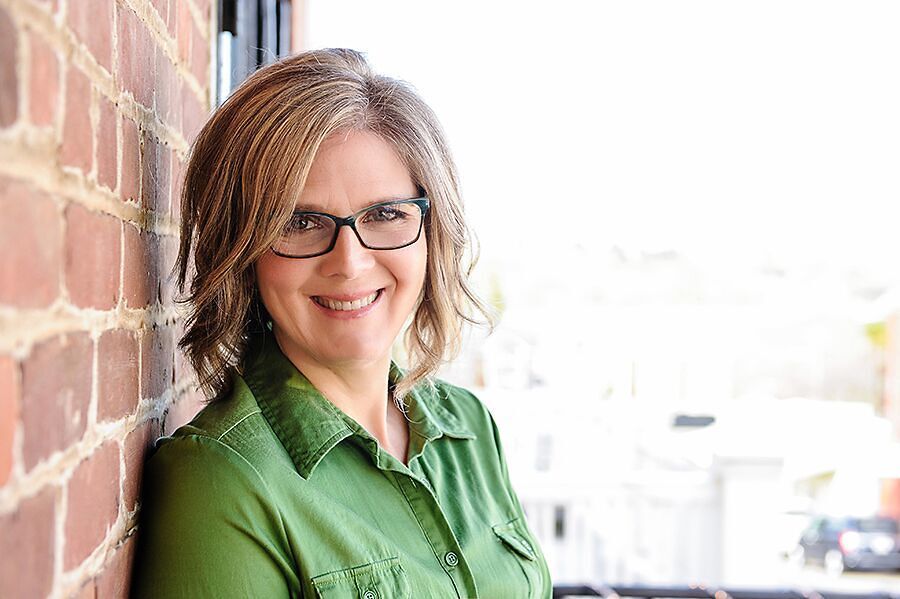 You May Kiss the Bride: The Penhallow Dynasty Kindle Edition

''Really fun! Very smart and engaging.'' (Megan Frampton, author of Why Do Dukes Fall in Love?)

''Prepare to be swept away! Lisa Berne's sensuous, richly imaginative debut will delight and satisfy you. I savored every page!'' --(Lenora Bell) --This text refers to an alternate kindle_edition edition.

In an unforgettable debut, Lisa Berne introduces you to the Penhallow Dynasty--men destined to marry, but hesitant to love.

Wealthy and arrogant, Gabriel Penhallow knows it's time to fulfill his dynastic duty. All he must do is follow "The Penhallow way"--find a biddable bride, produce an heir and a spare, and then live separate lives. It's worked so well for generations, certainly one kiss with the delectable Livia Stuart isn't going to change things. Society dictates he marry her, and one chit is as good as another as long as she's from a decent family.

But Livia's transformation from an original to a mundane diamond of the first water makes Gabriel realize he desperately wants the woman who somehow provoked him into that kiss. And for all the ladies who've thrown themselves at him, it's the one who wants to flee whom he now wants. But how will he keep this independent miss from flying away?

--Sarah MacLean, New York Times bestselling author of The Day of the Duchess --This text refers to an alternate kindle_edition edition.

Lisa Berne read her first Georgette Heyer book at fourteen, and was instantly captivated. Later, she was a graduate student, a grant writer, and an investment banker, but is thrilled to be returning to her roots and writing her own historical romance novels. She lives with her family in the Pacific Northwest.

In an unforgettable debut, Lisa Berne introduces you to the Penhallow Dynasty--men destined to marry, but hesitant to love.

Wealthy and arrogant, Gabriel Penhallow knows it's time to fulfill his dynastic duty. All he must do is follow "The Penhallow way"--find a biddable bride, produce an heir and a spare, and then live separate lives. It's worked so well for generations, certainly one kiss with the delectable Livia Stuart isn't going to change things. Society dictates he marry her, and one chit is as good as another as long as she's from a decent family.

But Livia's transformation from an original to a mundane diamond of the first water makes Gabriel realize he desperately wants the woman who somehow provoked him into that kiss. And for all the ladies who've thrown themselves at him, it's the one who wants to flee whom he now wants. But how will he keep this independent miss from flying away?

4.1 out of 5 stars
4.1 out of 5
77 global ratings
How are ratings calculated?
To calculate the overall star rating and percentage breakdown by star, we don’t use a simple average. Instead, our system considers things like how recent a review is and if the reviewer bought the item on Amazon. It also analyses reviews to verify trustworthiness.

Bec
TOP 500 REVIEWER
4.0 out of 5 stars Wasn't a fan in the beginning, but the characters totally won me over!
Reviewed in Australia on 7 April 2017
Livia Stuart isn't Gabriel Penhallow's type, but for some reason she somehow manages get under his skin. So much so that soon after meeting her he finds himself kissing her. Having no choice but to get engaged, Gabriel discovers there's no way he'll be able to stick to his plan of living separate lives after producing an heir. Can he find a way to prove to Livia that he's falling in love with her, or will the thought of becoming a Penhallow and all it entails make her run?

In the beginning, I struggled to get into this book. I thought the heroine was a brainless twit and the hero an emotionless robot due to their dialogue the first time they meet, but by the end I totally enjoyed this story. Because the more I read of it, the more I could understand why the hero and heroine are the way they are. They've never had tight family ties with both being treated like they are burdens, instead of people to be cherished by their loved ones. Can they both give each other the love they deserve?

As for the dialogue, it was intense due to the main characters back stories and everything they go through on their journey to happy ever after. Livia suffers the wrath of her frenemy, Cecily, because of what the woman believes the heroine does to her. How is Livia supposed to be everything Granny Penhallow expects her to be with the rumors going around about her? Will she be able to prove the rumors wrong? Then there's the hero's Granny who is tough on Livia, which made me feel sorry for the heroine. It's not her fault she doesn't know half the things she should know. If only her Aunt and Uncle could have been more kind and caring. Really, it's understandable why the heroine is so independent and determined to do everything she can to help those that need it. Because she had to do most things for herself and never wants anyone to feel the way she was made to feel growing up, which is proven by what she does for the hero's Granny, cousin and those that work for the Penhallows.

While the hero, he knows it's his duty as one of the few Penhallow men left to marry and have kids. Still, I could understand why he was so resistant of his feelings for Livia, because of the 'Penhallow' way of relationships. How could he possibly give the heroine what she deserves in a relationship when he's never witnessed a good marriage? However, the more time they spend together, the harder it is for him to resist Livia. Moreover, I liked the growing bond between him and his Gran. She isn't the warmest relative with her always telling him what to do and expecting him to listen, especially when it comes to who he should marry, but I liked how they grow really close in the end.

Overall, Ms. Berne has penned a really good read in this book, which had plenty of chemistry between the main characters that spilled over onto the pages wonderfully, and illustrated how right these two are for each other despite the fact that they are complete opposites. The way this story ended had me concerned for the heroine with what happens to her. Luckily, the hero was determined to make things right with her after making the wrong assumptions, otherwise things could have turned out differently. Still, I loved how the ending wrapped everything up nicely and answered the questions that were floating around in my head. How did things end up with Cecily? What would Livia and Gabriel do about Granny? I would recommend You May Kiss the Bride by Lisa Berne, if you enjoy historical romance, the opposites attract trope, the marriage of convenience trope or books by authors Karen Ranney, Callie Hutton or Christie Caldwell.

Suze Lavender
TOP 500 REVIEWER
5.0 out of 5 stars Entertaining, sexy and dreamy
Reviewed in Australia on 29 March 2017
Livia isn't an interesting marriage candidate because she doesn't have a dowry. Her uncle has taken her in, but isn't happy with her presence, she wears secondhand gowns and other girls in society are looking down on her. When she makes a stunning appearance at a ball Gabriel Penhallow can't help himself and kisses her. Gabriel is an eligible bachelor, a rich member of the ton. Because they are being caught he now has to do his duty and marry Livia. Livia has no say in the matter and is being sent to the Penhallow residence to live with Gabriel's grandmother, who will prepare her for a life as a high society woman.

Gabriel just wanted to kiss Livia because he was impressed by her enchanting presence and now he has to marry her. The Penhallows have enough money, so it is of no consequence that she doesn't have a dowry. However, Gabriel finds the situation infuriating and doesn't want to have anything to do with Livia. He will do his duty, but he doesn't have to like it. Will he eventually start to appreciate Livia or is their marriage doomed before it has even officially started?

You May Kiss the Bride is a fun romantic story. I immediately loved Livia. She has a good heart and she isn't afraid to speak her mind. I liked that she's both fiery and caring, which is a great combination. She doesn't entirely belong in the world she has now unwillingly entered, but she tries to make the best of it and I admired her spirit and determination. Gabriel is a difficult man to live with because he doesn't show his feelings and he hides behind a cold mask. His cool façade is mostly an act, he's actually a kind man with a gentle nature, but he doesn't let anyone come close. There's so much chemistry between him and Livia that he can't stay away from her. I loved their abundance of sparks and couldn't turn the pages fast enough to see if they would have a happy ending.

Lisa Berne writes about splendor and status in an original way. I loved her vibrant descriptions of both the good and the bad sides of high society. Livia has a lot to learn and step by step every important element of her new world is being explained, which is an angle I liked very much. The dialogue is amazing as well, I especially loved the bold way Livia talks to Gabriel's grandmother and their interaction is quite amusing. You May Kiss the Bride has plenty of enjoyable elements and it's entertaining, energetic and sexy. It's a fabulous dreamy story.

Constant reader
3.0 out of 5 stars Almost good
Reviewed in the United Kingdom on 12 April 2017
Verified Purchase
Well written, interesting story, a heroine who deve!ops nicely....what a pity the hero is such a dull stick, she deserved a more fully realised character.
Read more
Report abuse

LC Lindsay
5.0 out of 5 stars Read read read this!
Reviewed in the United Kingdom on 30 May 2017
Verified Purchase
This is a 5-stars read. Lisa Berne's detailed description of everything from food to a room, makes the reader "see" pictures instead of words. What a wonderful debut. I urge all historical romance readers to read read read this novel. It's beautifully written.
Read more
Report abuse

Mrs P Logan
5.0 out of 5 stars Thoroughly enjoyed
Reviewed in the United Kingdom on 4 May 2017
Verified Purchase
Write more like this one. I have another one on order so looking forward to reading it.
Read more
Report abuse

Kindle Customer
5.0 out of 5 stars Fantastic debut
Reviewed in Canada on 22 July 2017
Verified Purchase
Well written, very well paced. Characters reactions occasionally felt slightly modern but not enough to bother me. Congratulations to the author on an excellent first effort. I look forward to reading more.
Read more
Report abuse
See all reviews
Back to top
Get to Know Us
Make Money with Us
Let Us Help You
And don't forget:
© 1996-2021, Amazon.com, Inc. or its affiliates