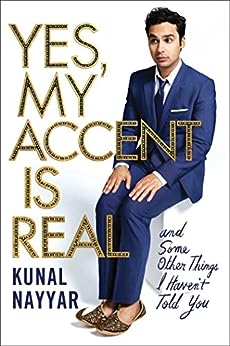 Yes, My Accent is Real: A Memoir Kindle Edition

Kunal Nayyar was born in London, England and raised in New Dehli, India. He first came to the United States in 1999 to pursue a Bachelor of Science in Business at the University of Portland (Oregon) and he received an MFA in Acting from Temple University. He has been part of The Big Bang Theory ensemble since it debuted in 2007. A ratings powerhouse in its sixth season (2012-13), The Big Bang Theory was the #1 most viewed scripted show in the 18-49 demographic on television and the ratings leader in all of syndicated programming. He lives in Los Angeles with his wife, Neha, who was named Miss India in 2006. --This text refers to an out of print or unavailable edition of this title.

"An international tale of fame and fortune, Yes, My Accent is Real could be The Big Bang Theory drug you're aching for.-- "Flavorpill"

"Anyone who has ever had an awkward childhoodor teenage moment will be able to relate to the situations Kunal went through, and this is one of those rare not-a-memoirs which is honest, and shows theauthor's own flaws. Rather than asking 'why me, ' Kunal owns his mistakesand learns from them, which is rather refreshing."-- "100PercentRock.com"

"Employing a charming, self-deprecating tone, [Nayyar] writes that he's too young for a memoir, so these anecdotes are merely stories from his life - humorous, insightful, heartfelt, and heartwarming autobiographical essays.-- "Booklist"

The author's charming style will keep readers invested, while the portrait of his family is beguiling in its sweetness and sincerity. A must for those who enjoyed Mindy Kaling's Is Everyone Hanging Out Without Me? or Judd Apatow's Sick in the Head.-- "Library Journal" --This text refers to an alternate kindle_edition edition.

4.4 out of 5 stars
4.4 out of 5
376 global ratings
How are ratings calculated?
To calculate the overall star rating and percentage breakdown by star, we don’t use a simple average. Instead, our system considers things like how recent a review is and if the reviewer bought the item on Amazon. It also analyses reviews to verify trustworthiness.

Sandi Frolich
2.0 out of 5 stars Two Stars
Reviewed in Australia on 14 January 2016
Verified Purchase
Not as good as i expected. For a memoir by a comedic actor i didn't even chuckle.
Read more
Helpful
Report abuse

Shelleyrae
4.0 out of 5 stars Charming, funny, genuine
Reviewed in Australia on 26 September 2015
As a fan of The Big Bang Theory I couldn't pass up the chance to learn more about the endearing actor who plays Raj Koothrappali, actor Kunal Nayyar.

Yes, My Accent is Real: and Some Other Things I Haven't Told You is a collection of stories and anecdotes from his life.

It begins with stories from his childhood in India spent dreaming of kissing Winnie from 'The Wonder Years' and playing badminton like a champ, before moving on to his time at college in the US, his interest in acting and landing the role of Raj on the The Big Bang Theory.

Kunar also writes about his family, especially his admiration for his father, his joy at marrying his wife, and his enjoyment and respect for the cultural traditions of his country. I was a little disappointed there wasn't more about his daily life as part of The Big Bang Theory cast though.

Kunal proves to be a sweet, genuine and self deprecating storyteller. Yes, My Accent is Real is a charming, funny and easy read.
Read more
Helpful
Report abuse
See all reviews

Lark
5.0 out of 5 stars I really liked this for some light reading
Reviewed in the United Kingdom on 31 January 2019
Verified Purchase
I picked up this book after reading some of Aziz Ansari's "Modern Romance", which like this book, is a pretty reflective read written by someone who is a celebrity performer (TV and stage/stand up famous) rather than a standard celebrity bio book. I was perhaps prepared for it to be a poorer book, in which case I would have tossed it, but it was a lot better than I expected.

Some other reviewers have criticised this book as Kunal is clear itself about it being pretty early in his life and career to be writing a memoir, it is therefore, instead a collection of stories, which do not contain a lot of tragedy, drama and strife. Well, I actually liked to hear stories from a life which had its own challenges, a lot of which were relateable, despite his having lived a pretty different life to me (and despite my being older than him it seems he grew up with a lot of similar TV programming). I can understand how some readers will think it is a little too light weight, some of it did leave me with additional questions and some of it did make me think Kunal had sugar coated things a little (all the sectarian violence in the surrounding area that he had grown up in, some of the threatening characters or situations he'd known growing up too, in particular when his dad was giving him and his brother keys to a gun cabinet). On the other hand I think Kunal writes in a style which is right for a wide readership too, different age groups, there's a lot of thought provoking messages here too, its also fun to read someone write appreciatively about their good times and minor triumphs along the way.

There is material here for fans of The Big Bang Theory, stories from the show, about the show's success (by extension Kunal's own success, which he acknowledges too) but in the main its a book about Kunal and his own life experiences. It was good to read his thoughts on things such as selective mutism, something his character in the TV show experiences, as I've heard all sorts of criticism (sometimes it really feels way too harsh) of the show for its portrayal of disability (selective mutism but also the possibility that another of the main character's neuro-typical/autistic) and so called Geek or Nerd culture.

There is a little bit of an attempt to inject some quirkiness into the book, such as the featuring of notes made on napkins or tissues on flights, the chapters can be a wildly differing lengths, there are one or two larger typeset inset notes in the middle of pages making observations about things such as frustrations with sentence correcting software but thankfully its limited. It is not a dense enough to be a memoir, as Kunal says, but it is not patchy or like reading someone's blog either.

All in all I really enjoyed reading this, it is light reading and uplifting, something for the times you need a break from something more academic or challenging non-fiction but also really do not feel like reading novels or novellas. There is so much by way of tribute to his family, friends and thankfulness for good fortune. It is something that I could see Kunal rehashing for an acceptance speech at some future award ceremony (as I dont think a man of his talent or as early in his career as he is, has even received his greatest accolades yet, probably). Recommended.
Read more
Report abuse

Peliroja
4.0 out of 5 stars Three and a half stars.
Reviewed in the United Kingdom on 6 March 2018
Verified Purchase
Kunal Nayyar is obviously a lovely bloke. He's also a fantastic theatre actor - I saw him in The Spoils in the West End a while back and he was so much better than I thought he'd be after seeing him in The Big Bang Theory. His timing was exquisite and his stage presence awesome. I'd go and see him on stage again regardless of which play he was in.

He also writes well. However. He begins this memoir (I had the audio version and he reads beautifully) explaining that it is not an autobiography as he is too young for that, but a collection of stories. The problem is, he had a fantastic upbringing within a loving, well-off family and nothing much exciting has happened to him. So the stories are on the dull side. Much is made of failing to get to kiss whatever girl he currently fancied and his excruciating failures in his university drama society before Big Bang. In fact, how he got into Big Bang is probably the best bit of this memoir. All in all it is a bit disjointed. For example, he talks a lot of his university days in Portland, but we don't discover what he is actually studying until late into the book. His reasons for leaving India to study so far away were never mentioned.

I think a bandwagon has been jumped on here and I really wish he'd waited until he had a fuller autobiography to write. But interesting enough for 7 out of 10. Just.
Read more
One person found this helpful
Report abuse

Amazon Customer
3.0 out of 5 stars Disappointing
Reviewed in the United Kingdom on 28 April 2017
Verified Purchase
Love BBT as a tv show and the character Raj (played by actor Kunal Nayar) in particular. However, I found this book disappointing as it was not as entertaining as i expected it to be. He gives anecdotes of his life which are mildly interesting and amusing in places - such as adolescent experiences with girls and then seeking work as an actor in the US - but he somehow comes across as very self absorbed. He gives a lot of detail about his sumptuous wedding when he married a former Miss India (which sounded incredibly decadent) but there was very little mention of the Big Bang Theory which was his big break, which would have been much more interesting. Maybe that should be the sequel.
Read more
4 people found this helpful
Report abuse

bailey
5.0 out of 5 stars Not a lot of Bang but great read
Reviewed in the United Kingdom on 17 November 2016
Verified Purchase
As a big fan of TBBT I thought this was a great insight of the man behind the character, I found it quite amusing and in some places quite sad, but this is not an autobiography but rather a series of memoirs and anecdotes from Kunal's early days leading up to the Big bang theory.
I went for the Kindle option so that I could read it anywhere without the bulk of a book, also as a pensioner it was cheaper. Lol, go and buy it and read it for yourselves and then comment.
Read more
One person found this helpful
Report abuse