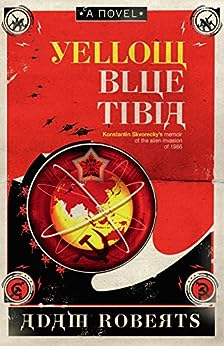 'The king of high-concept SF'--GUARDIAN --This text refers to the paperback edition.

'Roberts joins my list of essential writers.' - Vector.'The king of high-concept SF.' - Guardian. --This text refers to the paperback edition.

A PhilDickian epic of twisted realities and alien invasion set in the dog days of the Soviet Empire. --This text refers to the paperback edition.

Adam Roberts is 43 and Professor of 19th century literature at London University. His novels, SALT and GRADISIL have been shortlisted for the Arthur C Clarke Award. He has also published a number of academic works on both 19th century poetry and SF. --This text refers to the paperback edition.

Adam Roberts is commonly described as one of the UK's most important writers of SF. He is the author of numerous novels and literary parodies. He is Professor of 19th Century Literature at Royal Holloway, London University and has written a number of critical works on both SF and 19th Century poetry. He is a contributor to the SF ENCYCLOPEDIA. --This text refers to the paperback edition.
Read more

3.9 out of 5 stars
3.9 out of 5
49 global ratings
How are ratings calculated?
To calculate the overall star rating and percentage breakdown by star, we don’t use a simple average. Instead, our system considers things like how recent a review is and if the reviewer bought the item on Amazon. It also analyses reviews to verify trustworthiness.

Crookedmouth
3.0 out of 5 stars Doesn't quite live up to the cleverness of it's premise
Reviewed in the United Kingdom on 20 June 2011
Verified Purchase
Yellow Blue Tibia

Well, I was sucked in by several aspects of this book. A couple of people had recommended it or had suggested that it was well worth the read. The premise was sufficiently quirky and engaging that I felt it worthy of my time and the paperback cover was seriously eyecatching ("A Short History of Tractors in Ukrainian" played the same trick on me. Shallow? Me?).

The story is well covered in the blurb and other reviews, so I won't waste space on recounting that for you. The setting is (mostly) in mid '80's Russia (Moscow & Kiev) which adds some novelty to the affair and the plot follows a Russian science fiction writer as he uncovers a UFO conspiracy that he was in part responsible for starting. The cause of the Challenger shuttle and Chernobyl disasters are laid at the feet of his fictional (or are they non-fictional?) aliens and interestingly the Church of Scientology gets a look in as well.

Yes, it's a diverting story. Yes, the characters are interesting (I can only agree with a fellow reviewer that Saltykov, with his "syndrome", deserved a novel all to himself). Yes the plot is engaging and intriguing. Yes it's really well written (I can't agree with another reviewer about the authenticity of the Russian language - I have no expertise in the matter, but the majority of readers will share my handicap and are unlikely to be disturbed by the linguistic nuances). ...ad so on. This is a book that really should have worked.

Unfortunately, for me, it didn't. I found the plot horribly confusing (and confused) and by the time I reached the last page, the only aspect of the story that really got resolved was the title. Questions remained (for me) unanswered... Were the aliens real? If so, what did they want and why? What was Frankel and Skvorecky's part in the development of the events? ...and others that would be spoilers if I listed them here.

Perhaps the book needs another reading and maybe things would be clearer, but all in all, I found this deeply unsatsifying - a little like finishing the first two courses of a 3-course gourmet meal, only to be told that the desert is off the menu after all.

In my opinion, if you took out the UFO/conspiracy theory element and simply presented the characters and settings as a "slice of Russian life", this would be a novel well worth reading and if you try to read it as it stands but on those terms alone, then yes it's worth a go. As sci-fi though, despite the promising premise, it falls flat for me.
Read more
3 people found this helpful
Report abuse

Moom
5.0 out of 5 stars Thought provoking, exciting, tense, and darkly witty
Reviewed in the United Kingdom on 1 October 2014
Verified Purchase
This is a thought-provoking and darkly witty tale, although the humour reveals itself rather more in hindsight than in the moment. Like many Adam Roberts' books, it revolves around a central conceit, which is revealed late in the day - but the ride is exciting, fast-paced, and tense. Most especially it is tense - the backdrop of Soviet Russia helps to accentuate this tension, and Roberts brilliantly evokes an atmosphere of political claustrophobia and fear. Readers of Roberts' work will recognize the slightly chaotic behaviour of his characters, which is something I relish - they always feel very human to me. This book does feel to have more direction than some of the author's other works, though; the chaos is nicely paced with a steadily mounting tension. All in all, one of my favourites - a book to read, enjoy, and muse upon.
Read more
One person found this helpful
Report abuse

Quicksilver
4.0 out of 5 stars A Light and Comic Look at Existence
Reviewed in the United Kingdom on 2 July 2010
Verified Purchase
In the last six weeks, I have read two novels with brilliant titles. By coincidence, the Chernobyl disaster played a pivotal role in both. Where  The Sun and Moon Corrupted  was more hard science, extrapolating solid physics, 'Yellow Blue Tibia' is more metaphysical, exploring multiple universes and extra-terrestrial life. 'YBT' is also similar to another recent read  The Manual of Detection . All three novels are worth investigating, but this one is the most accomplished and entertaining.

'YBT' is light science fiction, and is laugh-out-loud funny in places. It had me in fits of giggles at one stage, such is the dry wit of main character, Konstantin Skvorecky. The novel's premise is simple. In 1946, in order to unite the world under the banner of Communism, Stalin gathers together the Soviet Union's pre-eminent science fiction writers. Having secluded them in an isolated dacha, he tasks the writers with planning a convincing alien invasion. The writers complete their task, only to be told to forget all about it; to return to their lives and forget that ever met General Secretary Stalin. Skvorecky was one of these writers.

The narrative then jumps forward forty years. Skvorecky encounters one of the other writers, who tells him that their invented tale of alien attack has commenced in the real world. Skvorecky is understandably sceptical, but he finds himself drawn into a plot that involves, assassins, the KGB and Scientologists.

As much as it is a science fiction novel, 'YBT' also examines the act of writing. It analyses the relationship an author has with their work, and how their work is viewed changes over time. There is also unexpected and sweet love story running through much of the novel, something not often seen in science fiction. It is a comical affair, yet somehow a real one.

The novel's conclusion is slightly baffling, and oddly forgettable (I'm struggling to recall, a week on, how the book finished). This is not particularly a problem, there is plenty of subtle food-for-thought about existence, and the possibilities of the many-worlds theory. Discovering why the book is called 'Yellow Blue Tibia' is worth the cover price alone. This is a light and comic read. Diverting and entertaining, reading 'YBT' is a fine way to pass a hot summer's afternoon.
Read more
One person found this helpful
Report abuse

P. McCLEAN
3.0 out of 5 stars Enjoyable read, but not a must read!
Reviewed in the United Kingdom on 3 August 2010
Verified Purchase
This is an enjoyable read. The first half of the book contains a lot of humour that is quite like the Russian humour found in the work of Vladimir Voinovich (see The Life and Extraordinary Adventures of Private Ivan Chonkin) but, IMHO over does it a little.

The hero of this novel is a Science Fiction author who is reduced to working as a lowly translator. He fought in the Great Patriotic War and was subsequently asked, by no less a personage than Joseph Stalin, to work, in secret, with a number of other Science Fiction authors, to produce the story of an attack on Earth by aliens from outer space. This collaboration is started shortly after WWII and is not a very long lived venture.

The story then leaps to the 1980s and we are provided with details of what was really behind the disaster at Chernobyl.

The first three quarters of this novel could be considered plausable, or the incredulous elements could be explained away by rational explanation. The final quarter is a different matter.

I have heard great things about the work of Adam Roberts, but this book has not encouraged me to rush out and grab another by him. Luckily, the version I have contains the first chapter of his next book, [The New Model Army], so I can sample that before handing out cash.

A good read, but not a must read.
Read more
2 people found this helpful
Report abuse

Mr. R. Bhaskar
3.0 out of 5 stars Baffling, but entertaining
Reviewed in the United Kingdom on 5 April 2015
Verified Purchase
Just after the Second World War, Konstantin Skvorecky was a science fiction author who was gathered by Stalin along with several of his fellow writers to concoct an invasion story that would unite the whole world against an (imaginary) alien threat after the inevitable fall of capitalism. Soon afterwards, the operation is abandoned and the writers all told to forget what they were doing, on pain of death. Many years later, in the Perestroika era, Skvorecky meets one of his fellow writers from that time who tells him that what they were working on at that time is starting to come true.

This was an odd book. Skvorecky has a great narrator's voice. Ironic, deadpan and authentically Russian. Not many other characters get as much detail but that's okay because Skvorecky is the one at the heart of it all. He's a comedic, tragic figure straight who could have been written by one of the greats of Russian literature.

There's some plot thrown in towards the end, mostly relating to Quantum, but if it's plot you're looking for, this book probably isn't for you. It's Skvorecky and the situations that he finds himself in that drive the book and everything in it. Amusing, probably quite deep, but somewhat bewildering as well.
Read more
One person found this helpful
Report abuse
See all reviews
Back to top
Get to Know Us
Make Money with Us
Let Us Help You
And don't forget:
© 1996-2021, Amazon.com, Inc. or its affiliates