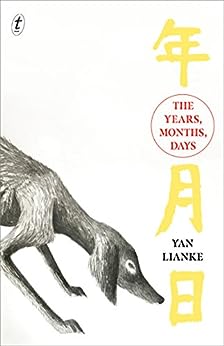 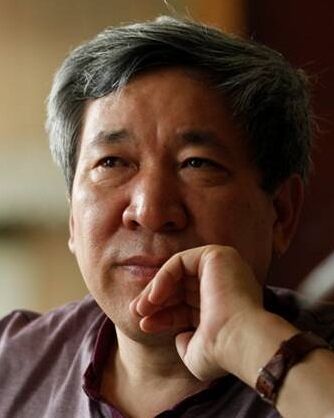 ‘Yan Lianke is one of the best contemporary Chinese writers.’ Independent

A luminous and deeply moving tale of hunger, loss and life by one of China’s most renowned contemporary writers.

The Years, Months, Days is a profound and moving fable about the deep love between an old man and his blind dog trying to survive in a terrible drought—there is no food, the villagers have left, but the old man has managed to nurture a corn seed that has germinated on a mountain top. He is devoted to this seedling.

The old man weighs the rays of the sun, working out the arithmetic of starvation and survival. Finally he realises that for his plant to survive, one of them has to be fertiliser. He loses the coin toss, lies in a grave he has dug and asks the dog to bury him.

Rich on so many levels, and not without its flashes of characteristic Yan Lianke humour, this cosmic tale will bring tears to readers’ eyes. The Years, Months, Days is compulsory reading for many Chinese children—and adults. You will see why.

Yan Lianke was born in 1958 in Henan Province, China. Text has published his novels Serve the People!, Lenin’s Kisses, Dream of Ding Village (shortlisted for the Man Asian Literary Prize), The Four Books and The Explosion Chronicles (Longlisted for the Man Booker International Prize). Yan Lianke won the Hua Zhong World Chinese Literature Prize in 2013. He has also won two of China’s most prestigious literary awards: the Lu Xan Prize and the Lao She Award. In 2014, he won the Franz Kafka Prize. He lives in Bejing.

‘One of China’s eminent and most controversial novelists and satirists.’ Chicago Tribune

‘A master of imaginative satire. His work is animated by an affectionate loyalty to his peasant origins in the poverty-stricken province of Henan, and fierce anger over the political abuses of the regime.’ Guardian

‘Yan Lianke well deserves to be in the Pantheon of great writers. He has no equal at attacking societal issues or the great Maoist myths in order to turn them into novels so breathtakingly powerful, shot through with black, often desperate, humor.’ Le Monde Diplomatique

‘A weirdly intoxicating book that moves from passages of stark realism to the most vivid sort of nightmare fantasy…A rather sentimental parable, a tale of suffering and sacrifice, a celebration of companionship and peasant ingenuity.’ Saturday Paper

‘The predicament it depicts is so harrowing, yet its treatment so stark and stately with a luminous beauty that makes it unearthly, that it retains a tragicomic quality that affirms the nature of art as an intimation of truth...What a hopeful book Yan Lianke has made out of the very essence of hopelessness. What a cry for life and human dignity.’ Peter Craven, Sydney Morning Herald

‘An accessible and fascinating introduction to the work of this novelist, The Years, Months, Days is a moving fable deserving of a wide readership.’ Irish Times

‘When times are bearable, or even good, there are a lot of things that we dismiss, because even though they can be sensed and felt, they can hardly be measured or put into sentences. Yan Lianke seems to suggest that we have to try anyways…What Yan Lianke does is offering the idea that alternatives exist, even in situations that render us seemingly incapable of taking action.’ Full Stop

A luminous and deeply moving tale of hunger, loss and life by one of China's most renowned contemporary writers. --This text refers to the mass_market edition.

Yan Lianke was born in 1958 in Henan Province, China. Text has published his novels Serve the People!, Lenin's Kisses, Dream of Ding Village (shortlisted for the Man Asian Literary Prize), The Four Books and The Explosion Chronicles. Yan Lianke won the Hua Zhong World Chinese Literature Prize in 2013. He has also won two of China's most prestigious literary awards- the Lu Xan Prize and the Lao She Award. In 2014, he won the Franz Kafka Prize. He lives in Bejing. --This text refers to the mass_market edition.

Yan Lianke was born in 1958 in Henan Province, China. He is the author of numerous novels and short-story collections, including Serve the People!, Dream of Ding Village, The Four Books, The Explosion Chronicles and The Day the Sun Died. He has been awarded the Hua Zhong World Chinese Literature Prize, the Lao She Literary Award, the Dream of the Red Chamber Award and the Franz Kafka Prize. He has also been shortlisted for the International Man Booker Prize, the Principe de Asturias Prize for Letters, the Independent Foreign Fiction Prize, the FT/Oppenheimer Fund Emerging Voices Award and the prix Femina &Eacute;tranger. The Day the Sun Died won the Dream of the Red Chamber Award for the World's Most Distinguished Novel in Chinese. He lives and writes in Beijing.

An old man and a blind dog trying to survive in a terrible drought in rural China. The old man didn’t leave when the other villagers left:

‘I’m seventy-two years old, and would surely die of exhaustion if I tried to walk for three days. If I’m going to die either way, I’d prefer to die in my own village.’

The Elder and the dog he calls Blindy set out to survive. A corn seed has germinated, and the Elder tries to nurture it. His hope is to harvest corn seed for the future, when people return to the village. He and Blindy work together: The Elder bringing water to the seedling, Blindy guarding it from the rats that want to eat it. The two of them, when the other food runs out and they’ve recovered all the corn seeds from the rats nests, kill and eat the rats.

The Elder must walk further to find water when the well runs dry. He has a terrifying encounter with wolves which he survives. He keeps bringing back the water, but it takes longer as he grows weaker. He has weighed the rays of the sun, to work out the arithmetic of starvation and survival. He concludes that the only way that the seedling can survive is if either he or the dog becomes fertiliser for it.

The Elder tosses a coin. He loses the toss. He lies in the grave he has dug and asks the dog to bury him.

‘In the end, the only people left were seven men from seven of the village’s households.’

I was led to this novella by a friend and highly recommend it. I remember reading about the disastrous impact of The Great Leap Forward when millions of Chinese starved to death in The Great Famine.

This fable unfolds over ninety-seven pages. It is both powerful and unforgettable: the relentless drought; the desperation for food and water; and The Elder’s determination to try to grow the seedling, to secure corn seed for a future he knows he will not be part of.

And now I need to seek out more of Yan Lianke’s work.

Inga-Beth
5.0 out of 5 stars This book is Chinese.
Reviewed in the United Kingdom on 10 August 2020
Verified Purchase
Lianke manages to make his readers part of the book. We are (!) the hero when we read it and we can't wait for the end. It's difficult to understand why it is so exciting to continue reading a book about a man who looks after his sweetcorn plant throughout the book.
Read more
Report abuse
See all reviews
Back to top
Get to Know Us
Make Money with Us
Let Us Help You
And don't forget:
© 1996-2022, Amazon.com, Inc. or its affiliates