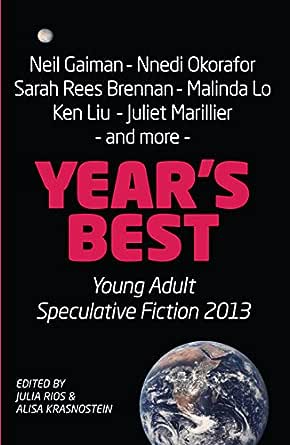 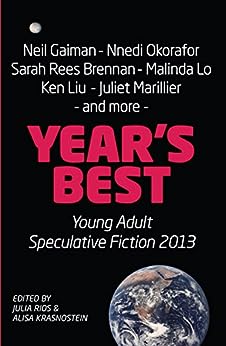 Melina D
5.0 out of 5 stars A fabulous YA anthology
Reviewed in the United States on 24 April 2015
Verified Purchase
Although I really enjoy short stories, I don’t usually seek out anthologies of them. Sometimes I find them at libraries and grab them and sometimes I buy them because of a connection to friends of mine, but they’re not usually the first thing I reach for. This anthology, however, might be the one that makes me look at short story anthologies differently.

Years Best YA Speculative Fiction began with an excellent introduction to the landscape through 2013 and – just to make my wallet groan – also included references to a number of YA speculative novels published through the year. Then it was on to the short stories and I suddenly ‘got’ the idea of a Years Best – these were magnificent.

There’s too many stories to go through individually, but there were a number which have just stuck with me, that I’ve returned to in my head since I’ve read them, just hoping for a little more taste of the world’s they offered. By Bone-Light by Juliet Marillier was probably the most long lasting of all of them – it felt haunting, yet slightly frantic and I really felt that I was there with the protagonist. There would be so many things to examine and savour with a class of students. The Carpet by Nnedi Okorafor gave me chills – I really shouldn’t read stories like that before bed. I Gave You My Love by the Light of the Moon by Sarah Rees Brennan felt so very complete – it was such a strong world in such a short amount of time.

As an Ancient History graduate, I always love the way Tansy Rayner Roberts mixes the familiar stories and legends of the ancient world with different worlds – as she does here in The Minotaur Girls. An Echo in the Shell by Beth Cato, was achingly sad, while opening up so many opportunities for other stories, so many questions about others in that world. Random Play All and the League of Awesome by Shane Halbach is another reminder that I really like stories with superheroes, even if I get overwhelmed by the established superhero worlds. What We Ourselves Are Not by Leah Cypess raised so so many questions for me, that I felt like I was having a philosophical argument with myself while and after reading it.

Persimmon, Teeth and Boys by Steve Berman was happy and sad and another one which raised questions for me. Finally there was We Have Always Lived on Mars by Cecil Castellucci which actually made me gasp aloud at the ending – I had to go back and read it again to make sure I’d read what I thought I’d read.

This is truly a fabulous exploration of YA Speculative Fiction and a wonderful look at the landscape of 2013. We can see ideas being explored and questions being asked, but we also see a background of being a young adult which is terribly familiar. It’s a book which would be fabulous in a school setting – as a book to borrow from the library (I would have adored it as a teenager) or a book to explore in the classroom. It’s also a book which is incredibly accessible to an adult audience – proving that stories about teenagers are as important as stories about older people.

(Disclaimer – I am friends with one of the editors. However, I bought this book myself and all opinions are mine.)
Read more
2 people found this helpful
Report abuse
See all reviews
Back to top
Get to Know Us
Make Money with Us
Let Us Help You
And don't forget:
© 1996-2021, Amazon.com, Inc. or its affiliates