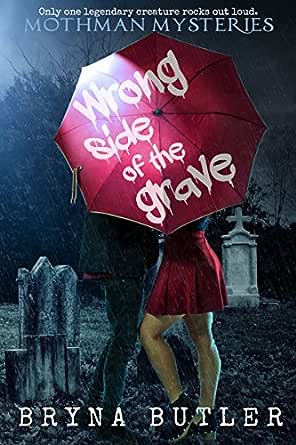 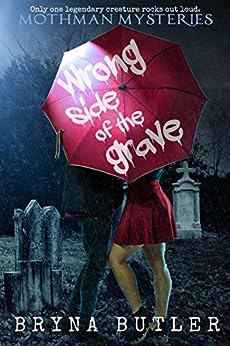 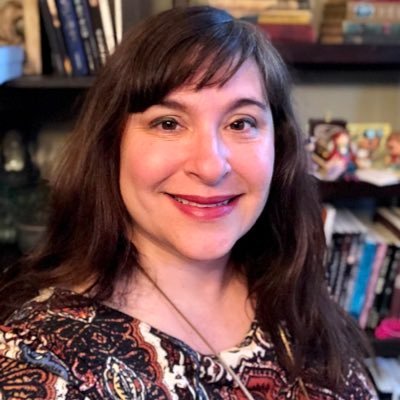 Wrong Side of the Grave (Mothman Mysteries Book 1) Kindle Edition

Bryna Butler is a journalism-trained writer having authored dozens of articles and financial publications before taking the leap into fiction in 2011. She holds a bachelor's degree in Mass Communications from the University of Rio Grande where she received the Outstanding Communications Student Award for her graduating class. Her first book, Of Sun & Moon, skyrocketed to number one on Kindle top free charts in the categories of Teen/YA Supernatural Mystery, Teen/YA Romantic Mystery, and Teen/YA Time Travel in the U.S. and U.K. when the title went to free status in 2014. Self-described as a teen who refused to read, Butler often speaks to students on how to read for recreation and finding the books that are right for them. She strives to create characters that are relatable and feel the full weight of their choices. Butler's work is free of profanity and sexual content making them safe reads for pre-teen as well as teen readers. --This text refers to the paperback edition.
click to open popover

KellyM
5.0 out of 5 stars Nothing like you'd imagine
Reviewed in the United States on 24 April 2019
Verified Purchase
My sister recommended I read this book. I went into it not knowing anything in particular (except I loved the cover) and... well, I finished it in 3 days. I had to fight to put it down because it is SO GOOD. Eric is just your typical ordinary vampire hunting drummer in the local band. His friend, Bridget, is into book reviews and being all nerdy. When the dead start to rise, things get very interesting, very fast.

WSotG has lots of twists and turns which, in turn, made me turn the pages faster and faster. I loved Eric. He's what I wanted Jace in The Mortal Instruments to be-- snarky without being overly snarky. Caring without brooding. Loyal without making a martyr of himself.

Ethan@ OneGuysGuideToGoodReads
4.0 out of 5 stars An Interesting Twist on the Genre and a Mystery You Won't See Coming!
Reviewed in the United States on 9 May 2016
Verified Purchase
Full review and more available at: [...]

I have to say, I really didn't know what to expect when I first picked up Wrong Side of the Grave. The synopsis really left me interested, but I didn't quite know where to place it in my head. It's definitely not something I'd ever read before, but I couldn't wait to take the plunge. What did I think? Well, it's complicated.

I guess I should start out by saying that I love paranormal, but I'm not the biggest sci-fi fan. When the genres cross paths, I've seldom seen good results. Thankfully, to my surprise, Butler pulled it off pretty well. You see, I love vampires. They're among my favorite of all paranormal creatures, but I'd never quite seen anything like what Butler has done to the trope. Vampires depicted as otherworldly beings? Now that's a twist.

This being said, I'm not entirely sure the vampire aspect was quite what I was looking for. Butler did a great job with the world building in this novel. Keeps the mysterious, yet historical setting for the novel at an incredible pace, giving readers just enough to keep them reading, but not spoiling any surprises until the very end. This is were the vampire-aspect of the characters gets a bit odd. In all actuality, I don't see why it was important for the characters in question to be vampires, because in the end, the fact that they are actually aliens is what drives the story. When it comes to vampires, you really have to hit the historical aspect pretty hard on the head (in most instances), but, aside from one scene, this one fell flat on the vampire-trope for me.

Now that doesn't mean I didn't fall hard for the story, just don't go in expecting your standard run-of-the-mill vampire novel, because you will be disappointed,

Now, the alien, other-worldly aspect of Wrong Side of the Grave? Butler killed it. Seriously. Alien technology, secret government agencies, hidden spaceships: what's not to like? As I mentioned before, I'm generally not a sci-fi fan, but Butler did a great job capturing my attention from the very beginning.

Now that we've covered the genre aspect of the novel, let's talk about the story.

I have to say that I found the plot of WSotG to be very original. Butler has twisted an intriguing local legend (one that I even researched myself after reading) to craft a story that will delight readers young and old. I was genuinely surprised by the finale, but the exposition of the novel really created a literary world that left me flipping each page with anticipation.

The plot was fun. It was a pretty quick read. If anyone has read any of my reviews in the past for mystery novels, you'll know that mysteries are one of my least favorites for a number of reasons. They are often entirely too dramatic, predictable, and leave me more than disappointed. I am so glad to say Butler passed the mystery test. They always say the culprit in a mystery is supposed to be the last person you suspect, and I have to say I didn't see the mystery Butler gave us to be unraveled as it did.

As per the characters? I found them to be fairly relatable, but above all, realistic. I liked the characters sense of responsibility, but also their down-to-earth demeanor and maturity on most subjects. I'd really like to see more from Butler in the same vein as WSotG, as these characters were spot-on.

Now as you guys can see from the synopsis, this is a safe read for all ages. No sexual content, profanity, etc. That being said, I was actually kind of put off by how safe this read was. I give full respect to Butler for taking this approach as it is a great way to grab readers across all age groups, however I really would have loved to see this novel take a more adult direction. Rock stars in a small town high school? Attractive-otherworldly male lead? Corpses rising from the dead? I think this story could have really excelled as an upper-YA/NA or even adult series. While Butler does an incredible job appealing to all readers, I definitely believe an opportunity was missed here by not appealing to an older crowd. This is just my opinion. While I enjoyed the novel overall, I would have loved to see some adult content. Especially regarding language and adult content. At times WSotG read more like a middle-grade novel than a YA stories with Butler's word choices.

Butler really hits on some deep themes in WSotG. Especially regarding death. It's a strong subject that takes a truly talented author to explore its' depths. Too many authors merely lay it out there with little-to-no explanation or explaining the psychological impact it can have on characters. Butler used these events to further explore the psyche of her characters to really allow the readers to get into their minds and enjoy their story even more.

All of this being said, I was slightly let down by the ending of this one. Butler sets up the world for many more potential stories in the series, but we really don't have a clear vision if any are to come. I know that I would personally like to see more of this world expanded upon in future stories. As with most mysteries, the story does wrap up most loose ends and leaves you with a warm feeling in your bookish heart.

As you can see, I had some conflicted thoughts on Wrong Side of the Grave. It may not have been my favorite novel in either of the genres that it dabbles in, but I was still most definitely impressed by the story as a whole. I look forward to what Butler does with this series in the future. That being said, I am granting Wrong Side of the Grave a 3.5-star review. While it wasn't without it's issues, it was still a fun, past-paced read that left me finishing each chapter with anticipation. If this sounds like the story for you, don't miss out. Add this to your TBR today!

PJ
5.0 out of 5 stars Gotta love adventure of the paranormal!
Reviewed in the United States on 4 May 2015
Verified Purchase
I love the idea of Mothman! Growing up around the time of this " character", this book gives him a different turn of character! I love the the book and the idea that everyone could read it! No sexual content or profanity. The book is very adventurous! A cery good read.
Read more
Helpful
Sending feedback...
Thank you for your feedback.
Sorry, we failed to record your vote. Please try again
Report abuse