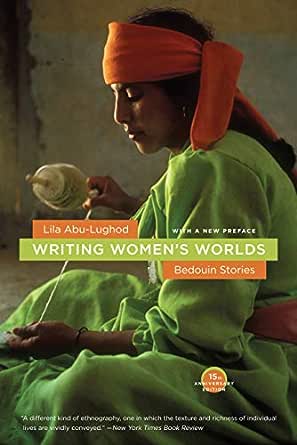 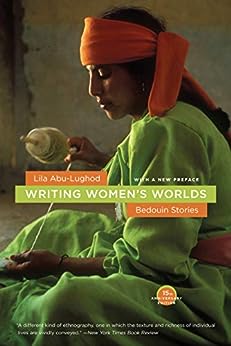 "In "Writing Women's Worlds, Bedouin women are the narrators of their own lives; they are not the subjects or objects of ideas projected by the ethnographer's imagination. . . . This will be an important work in the field of international feminist studies for some time to come. . . . An excellent effort to 'decolonize' a people in writing and to alter the usual preconceived ideas the Western reader brings to studies of Arabs and Muslim women."--"Women's Review of Books --This text refers to an out of print or unavailable edition of this title.

Lila Abu-Lughod is Professor of Anthropology and Gender Studies at Columbia University. She is the author ofVeiled Sentiments: Honor and Poetry in a Bedouin Society (California, 1986) and the co-editor, with C. Lutz, ofLanguage and the Politics of Emotion (1990).
--This text refers to an out of print or unavailable edition of this title.

tracy page
5.0 out of 5 stars Amazing book
Reviewed in Canada on 15 February 2013
Verified Purchase
It was heartfelt. It was really interesting hearing the stories from the Bedouin women themselves. I hope I can find more books like this.
Read more
Report abuse

Etienne RP
4.0 out of 5 stars Anthropology for Whom?
Reviewed in the United States on 3 November 2009
Verified Purchase
In the preface to the new edition, Lila Abu-Lughod confesses that her book failed to reach its public. It was "billed as a book about women and an experiment in feminist ethnography", and its key messages failed to pass through. In any case, she may have tried to kill too many birds with one stone. As she recalls, "in Writing Women's Worlds, I used the narratives, arguments, and everyday lives of some individual families living on Egypt's northwest coast to try to do three things: to confront my discipline of anthropology with the ways it has tended to typify cultural groups, to challenge public discourse about women of the Muslim Middle East, and to show Western feminists that defining patriarchy is not at all a simple matter."

The three imagined audiences implied in that statement--fellow anthropologists, writers about women in the Middle East, and Western feminists--broadly belong to the same group: academics, to use a shorthand. It is this targeted public that the book failed to reach, eliciting few reviews and even less scholarly debate. So the author feels compelled, in the new preface written "for the twenty-first century", to restate and to clarify her key messages.

She thinks that what Writing Women's Worlds has to offer has become all the more urgent in the new context within which these intended audiences might now read a book like this. Anthropologists should discard the concept of culture as they did with the notion of race because "the concept lends itself to usages so apparently corrupting of the anthropological ones as the pernicious theses of Samuel Huntington's clash of civilizations". In light of the heightened obsession with the "oppressed Muslim woman", in the name of which wars are wielded as in Afghanistan, she feels it is her duty to give voice to some of these Muslim women, and to illustrate "what Islam means in one particular place at one particular time". Although sympathetic to the feminist cause, she refuses to attribute to the women in her book forms of consciousness or politics that are not part of their experience, and she thinks that their stories of family, honor, piety and modesty, can "complicate" some widely held views and "talk back" to feminists and their agenda.

So in Lila Abu-Lughod's view, shared by the editors of the University of California Press, her book deserves a second chance. The spirits of the times, which highlight the urgency of the message, are also more auspicious to its reception. The novel style, which the author labels "narrative ethnography", has since then become more common in anthropology. Other scholars, such as  Saba Mahmood  or  Lara Deeb , have written books about the islamic revival that also "talk back" to the feminist agenda, which too often conflates description and prescription. And Abu-Lughod's thinking has also evolved, allowing her to be more explicit and specific about arguments that were only hinted at and suggested in her original narrative.

But books, once published, have a life of their own, and they sometimes reach unintended publics or are put to uses the author did not think about. In her new preface, Lila Abu-Lughod tells of the many e-mails she received from readers, mostly students, who wanted to know what happened to the individuals they had come to know through the book. These readers were not primarily interested by discussions about feminism, ethnographic writing, or the concept of culture. They read the book as they would have a fiction or a documentary, and they were eager to learn what happened "in real life". This tendency is sometimes seen by some writers as problematic, because of the need to protect the private life of people who confided to the ethnographer from voyeurism.

In a way, the author had already anticipated that concern. She notes that "in a sad way the women whose stories I retell here are not the audience of this book"; and yet she is preoccupied with the reception of her writings in Egypt and in the local community depicted in the book. She worries that she has "made public the narratives that women told only to specific others and has made permanent what was meant to be fleeting". She notes that "In an age when the boundaries of "culture" have become difficult to keep in place, when books travel, and when global politics appear increasingly uncertain, we have to anticipate the uncomfortable irony that our most enlightened endeavors might not be received as such by the subjects of our writings". And indeed in the preface written in 2007, she records a meeting with a young woman related to her host family who was studying sociology in Alexandria University and who grilled her with questions and comments.
Read more
11 people found this helpful
Report abuse

Luke
4.0 out of 5 stars Good look into another world
Reviewed in the United States on 16 August 2012
Verified Purchase
A very insightful look into a world that many of us would never otherwise venture into. The author takes a very personal interest, and presents the subject from a very intimate viewpoint, such as a scene of women around the dinner table, or out and about shopping. After reading this novel I have acquired a bigger appreciation of the struggles of the women in these worlds, and have gained a similar appreciation for how far we've come since then. A very interesting read. Easy to read for any level of interest, whether you're reading this for a class, work, or for personal enrichment.
Read more
2 people found this helpful
Report abuse

Cynthia
5.0 out of 5 stars Engrossing
Reviewed in the United States on 26 February 2003
Verified Purchase
This book gives intimate details of the events most important to the women involved-- family dynamics, marriage, childbirth, and so forth. Because Ms. Abu-Lughod seems to have become almost a member of the family, the book reads like an insider's rather than outsider's account. It is affectionate without becoming sentimental or lacking in objectivity.
Read more
6 people found this helpful
Report abuse
See all reviews
Back to top
Get to Know Us
Make Money with Us
Let Us Help You
And don't forget:
© 1996-2021, Amazon.com, Inc. or its affiliates