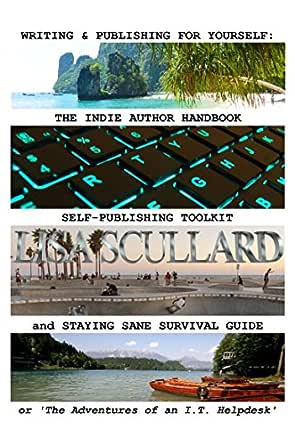 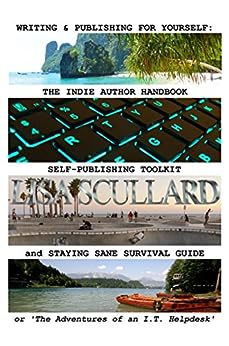 Writing & Publishing For Yourself: The Indie Author Handbook, Self-Publishing Toolkit, and Staying Sane Survival Guide: or 'The Adventures of an I.T. Helpdesk' Kindle Edition

KA Smith
5.0 out of 5 stars How not to write how not to write a novel...
Reviewed in the United Kingdom on 29 October 2015
Verified Purchase
I opened this for a quick look about four hours ago and have only managed to drag myself away to make lunch. If only I could have kept away from the ebook while I was eating. I now know why I don't customarily chow down on spaghetti with a ragout sauce whilst using my laptop. It's not too bad if it just gets on the screen... Perhaps I should get a kindle after all, they must be easier to clean - no keyboard. Or perhaps I should stop ignoring the Italian opinion as to the suitability of bolognese sauce with such flicky, dangly pasta. Anyhooha, enough of me and more of this.

Evidently and avowedly a collection of earlier writings for blogging purposes, this rises high above the mundane bulk of mediocre blogosity into the realms of real writing. Just as well, as that is where it positions itself, but then again. Yes, well, moving slowly on. I am lucky enough to have missed out on Lisa's blog, so all of this is fresh and new as a new and freshly new thing for me, rendered all the more consumptible by the unlooked for presence of one or two characters from my penumbral past. Oh dear. More about me again.

There is a lot of 'advice' elsewhere for the wannabe writer, some free, some cheap, some far too costly - even if it might be free. I've seen a fair bit of it, and what there is of wisdom within can usually be handily summed up by Aristotle's dictum: "that which we learn to do, we learn by doing". All well and good, but sometimes we don't know what we're learning, or if we're learning, or if there is a better or (especially these days) a quicker way of learning it.
And much of the angst and uncertainty that arose hitherto within the quondam wannabe writerly breast occurred because we didn't really know what it was we wanted to write, so we couldn't know what it was we had to learn, because we never went to see the Pythoness at Delphi and pondered the inscription there.
So we quit.
Or we failed.
And a lot of us are still sulking. Because we don't know ourselves, and we have no idea why we are writing. Aye, there's the rub.

A question not asked often enough, not by a long chalk judging by some of the drivel I've ploughed through masquerading as fiction - not to mention memoirs. Lisa makes a point of asking the would-be-writer to ask themselves a big WHY, with examples, in such a way that they actually might get to the nub of it, and have more of a chance of actually becoming a writer than if they plough ahead through a minefield of self delusion.

And humourouly handled. It makes the potentially bitter pill of realisation easier to swallow. "Oh! That's why I'm writing? Maybe I should go into politics instead... On second thoughts, perhaps I should just cut to the chase and become a merchant banker". Hmmm.

So. Laugh? I nearly did, but the sauce went up my nose and I've been more careful since - bay leaf and black pepper are not easy on the mucus membranes. I've tried to stick to wry grins, but the odd chuckle snuck out. But it's not all funny.

Sage advice - to stick with the seasonings - on writing, a leavening of wit, and much real world experience tangibly expressed. I (me, me, me) recognised some of the examples of folly all too well: I have scaled too many edifices whilst drunk to let some of that writing on the wall go unrecognised, and I wince, partly in shame and partly in a strange half-pained surprise at the reckoning that has still never been fully made. 'We are such dreams as bruises are made on', as the Bard might have said, but probably didn't. No matter how drunk he might have been, or what half-timbered alehouse he was saying he could climb at the time. Lisa hits the nail on the head with her real world examples, as she does with emphasisng the necessity for the writer to engage with the real world so thaqt they have something to write about. And so much of this rang truer than I might sometimes like (which is the point where we might be actually having our eyes and our minds opened) that I was shaking my head at memories of my own silly self as much as I was chortling at the wit.

Write what you know is the standard advice to writers, but, as Lisa makes mention, we so often don't actually know what we do actually know until somebody else has actually read it and actually gone mildly librarian-poo and pointed out that there are a number of matters in which we have, actually, been glibly misleading ourselves. So the great advice to the writer here is 'learn'. In as many ways as you can. No matter if you are a slow leaner, like me, who is still pretty sure that he is about 17, whilst simultaneously being well into his 6th decade (at least I've learnt to count, if not that it is bad manners to coin new spellings at writers who can probably remember ALL the words on THAT page of Merriam Websters' - oh dear): the wonderful thing about learning, like numbers and unlike subjective time, is that learning doesn't run out. So learn, you budding writer, you. That means heading out into the wired grey yonder at least as much as it does wading through the interweb, where much of the 'learning' is erroneous if not bone-headedly downright wrong, and too easily garnered to have much meaning even if it should be right.

There is plenty of more specific advice, as well as the blatant big picture stuff, on character, on 'serious' writing, on the whys and hows and nuts and bolts. All made clear and present by a limpid style that slips the pedagogy past in a palliative of puns. Or wit, or gentle humour or remembrance. Passages about the how sparked some immediate reactions and Doh! moments of self-realisation. They had me scrawling notes to myself about what I should have been writing, even as I was trying to keep reading. Sparking small understandings that sloughed a new slew of ideas off, then those ideas sparked more realisations. I think it is working.

So there you have it, folks. Take a leaf out of Lisa's book and live and learn, and then turn it all into the bestest most entertaining and truth-full lies you can. There are loads of words out there, but, though they do wear down, and occasionally wear out, and get slippery and out of shape, there is never likely to be a shortage of them, so grab them by the armload and make them your own. Just make sure you throw an idea or two in there as well, to get the words to stick together.

And thank you, too.
Read more
Helpful
Sending feedback...
Thank you for your feedback.
Sorry, we failed to record your vote. Please try again
Report abuse

K H Brady
5.0 out of 5 stars Lisa Scullard offers constructive advice.
Reviewed in the United Kingdom on 18 November 2015
Verified Purchase
Lisa's quirky,often off beat style of writing , contains many gems for those seeking to understand how to use Create space. Her determination to overcome personal problems is conveyed in a light hearted manner yet her success, including several books to her credit, is an inspiration to many.

A book well worth reading, we can all learn from this easy approach to become more adapt at offering our work to a wider market.
Read more
Helpful
Sending feedback...
Thank you for your feedback.
Sorry, we failed to record your vote. Please try again
Report abuse

ann
5.0 out of 5 stars A comprehensive handbook
Reviewed in the United Kingdom on 31 March 2016
Verified Purchase
Review by Ann.

This well compiled work is an essential 'handbook' for all writers. There are great touches of humour along with all the useful 'do's and don''ts' attached to writing and publishing.
Read more
Helpful
Sending feedback...
Thank you for your feedback.
Sorry, we failed to record your vote. Please try again
Report abuse

P. J. Cahill
5.0 out of 5 stars Helpful
Reviewed in the United Kingdom on 11 November 2015
Verified Purchase
I found the book helpful and easy to read
Read more
Helpful
Sending feedback...
Thank you for your feedback.
Sorry, we failed to record your vote. Please try again
Report abuse