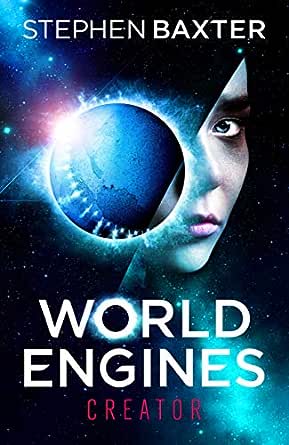 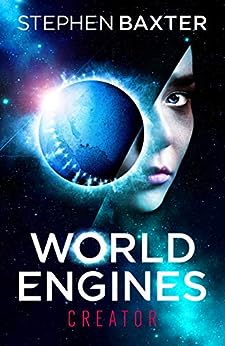 Stephen Baxter is the pre-eminent science fiction writer of his generation. Published around the world he has also won major awards in the UK, US, Germany and Japan. Born in 1957 he has degrees from Cambridge and Southampton. He lives in Northumberland with his wife. --This text refers to the hardcover edition.

The combined crews of crashed spaceships from different realities must work together to save themselves, escape the planet and discover how the World Engineers have altered the Solar System, and why...

Stephen Baxter is the pre-eminent SF writer of his generation. With Terry Pratchett he has co-authored the Long Earth novels. Published around the world he has also won major awards in the UK, US, Germany, and Japan. Born in 1957 he has degrees from Cambridge and Southampton. He lives in Northumberland with his wife.

4.1 out of 5 stars
4.1 out of 5
277 global ratings
How are ratings calculated?
To calculate the overall star rating and percentage breakdown by star, we don’t use a simple average. Instead, our system considers things like how recent a review is and if the reviewer bought the item on Amazon. It also analyses reviews to verify trustworthiness.

There are 0 reviews and 19 ratings from Australia

Nigel Frankcom
5.0 out of 5 stars Highly recommended
Reviewed in the United Kingdom on 12 February 2021
Verified Purchase
Loved the story, loved the characters. An all round enjoyable, entertaining and educational tale that left me wanting… the last book felt a bit rushed, the closing unsatisfactory for reasons I cannot name. However, it is the author’s prerogative, so any personal disappointment is just that, personal.

Perhaps there’s more coming down the pipe, in which case I will be front and centre in the queues.

Alastair Mouat
3.0 out of 5 stars A bit tedious and repetitive.
Reviewed in the United Kingdom on 23 September 2020
Verified Purchase
The first book of this duo-logy was good with Baxter’s usual spread of interesting characters and plots. This book, however, is tedious and repetitive. A large part of this book is spent filling in the reader on the first book and more than once. I think Baxter lost his way on this one. Surprised it got past the editors.
Read more
One person found this helpful
Report abuse

Phil
5.0 out of 5 stars A fitting sequel - Can be read as stand-alone
Reviewed in the United Kingdom on 8 February 2021
Verified Purchase
Very interesting sequel to the first World Engines book. In typical Baxter-fashion, it can also be read as a stand-alone book: it is not compulsory to buy all the books (although they are great to read, and I would recommend them), as enough explanations are provided at the beginning to make the entire story clear.
Great imagination and masterful story-telling, as always ...

Stuart Speake
3.0 out of 5 stars Just a bit dull
Reviewed in the United Kingdom on 15 September 2020
Verified Purchase
This just didn't grab me like the previous book. All the constant discussion on why this reality was different from this other reality and this moon is bigger that moon... Well who cares. The characters and story just didn't develop.
Read more
Report abuse

Paul
4.0 out of 5 stars Enthralling and engaging
Reviewed in the United Kingdom on 2 December 2020
Verified Purchase
Baxter, as usual, perfectly mixes high level science concepts and factual stellar information with a human story, humour and wit.
A must-read for any fan of his work, or a good entry into his world for the uninitiated.