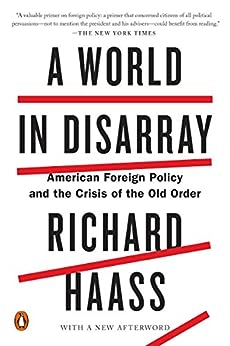 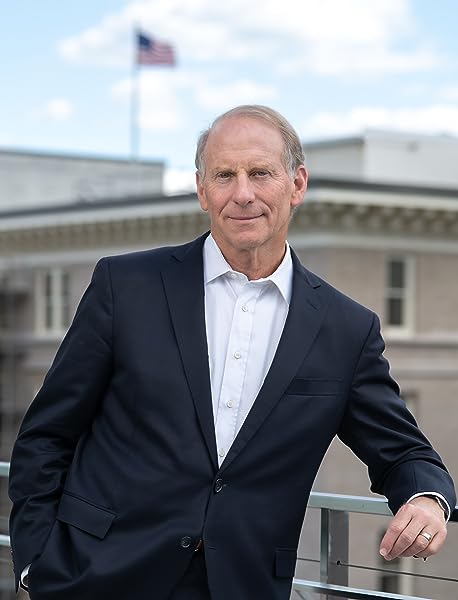 A World in Disarray: American Foreign Policy and the Crisis of the Old Order Kindle Edition

"A valuable primer on foreign policy: a primer that concerned citizens of all political persuasions -- not to mention the president and his advisers -- could benefit from reading."
-Michiko Kakutani, The New York Times "A must-read for the new American president and all who are concerned by the state of the world and the prospect of things getting worse. Richard Haass takes the reader galloping through the last four centuries of history to explain how we got to where we are, and then offers an insightful and strategically coherent approach to coping with and managing the challenges before us. Practical and provocative: a book that sets the policy table."
--Robert M. Gates "Haass's views demand the highest respect, because he understands that the foremost requirement for stability is that the great nations can deal with each other, and should use diplomacy, an art that recent British governments have almost abandoned in favour of soundbite broadcasts, and that in America threatens to be displaced by a tweetocracy. He understands the limits of power, and of the possible: terrorism must be contained, but cannot be eliminated. China and Russia must be granted respect on the world stage, but a willingness to resist their acts of aggression must be supported by credible western armed forces. America needs to change its Middle East policy, but cannot conceivably walk away from the region. If we had grounds to suppose that the new tenant of the White House was taking Haass's book to his bed with him, the rest of us might sleep a tad easier in ours."
-- Sunday Times "This is a thought-provoking book that suggests the new foreign policy 2.0 requires more global engagement."
--Huffington Post

"Richard Haass's A World in Disarray is an important primer on the chaotic landscape Trump will inherit."
--New Republic "In a world where power has become decentralized and respects no borders, we need an updated operating system, one that provides a new method for conducting diplomacy. In this wise and historically grounded book, Richard Haass shows what we need to do at home and in our foreign policy to make this work. It's a brilliant approach for a troubled world."
--Walter Isaacson

"With bracing intellectual rigor and a sure feel for the realities of politics and of culture, Richard Haass offers us an invaluable window on a world, as he puts it, in disarray. A wise and engaging voice, Haass is always worth listening to--now more than ever."
--Jon Meacham "We live in an age when trends once thought irreversible -- globalization, unipolarity, even democracy -- have proven no longer to be. I know of no better guide through these upheavals and toward the new strategies they require than Richard Haass's A World in Disarray. It's essential for anyone trying to understand the new pivotal moment we all inhabit." --John Lewis Gaddis --This text refers to the hardcover edition.

An examination of a world increasingly defined by disorder and a United States unable to shape the world in its image, from the president of the Council on Foreign Relations. --This text refers to the paperback edition.

Dr. Richard Haassis president of the non-partisan Council on Foreign Relations. He served as the senior Middle East advisor to President George H.W. Bush and as Director of the Policy Planning Staff under Secretary of State Colin Powell. A recipient of the Presidential Citizens Medal, the State Department's Distinguished Honor Award, and the Tipperary International Peace Award, he is also the author or editor of twelve books on foreign policy and international relations. Dr. Haass lives in New York. --This text refers to the hardcover edition.
Read more

Dr. Richard Haass is president of the Council on Foreign Relations, the preeminent independent, nonpartisan organization in the United States dedicated to the study of American foreign policy. An experienced diplomat and policymaker, Dr. Haass was director of policy planning for the Department of State from 2001 until 2003, where he was a principal adviser to Secretary of State Colin Powell on a broad range of foreign policy concerns. Confirmed by the U.S. Senate to hold the rank of ambassador, Dr. Haass served as U.S. coordinator for policy toward the future of Afghanistan and was the U.S. envoy to the Northern Ireland peace process. He was also special assistant to President George H.W. Bush and senior director for Near East and South Asian affairs on the staff of the National Security Council from 1989 to 1993. A recipient of the Presidential Citizens Medal, the State Department’s Distinguished Honor Award, and the Tipperary International Peace Award, he is the author or editor of fifteen books, including the best-selling A World in Disarray. A Rhodes scholar, he holds a BA from Oberlin College and both master and doctor of philosophy degrees from Oxford University. He has received honorary degrees from Central College, Colgate University, Franklin &amp; Marshall College, Georgetown University, Hamilton College, Miami Dade College, and Oberlin College.

4.5 out of 5 stars
4.5 out of 5
422 global ratings
How are ratings calculated?
To calculate the overall star rating and percentage breakdown by star, we don’t use a simple average. Instead, our system considers things like how recent a review is and if the reviewer bought the item on Amazon. It also analyses reviews to verify trustworthiness.

Christopher Lawton
5.0 out of 5 stars Very informative and current
Reviewed in Australia on 4 March 2018
Verified Purchase
Very informative, comprehensive and educational. Haas obviously has a good solid understanding of world politics and his writing style is fluid and easily comprehensible. "After the paperback edition" section alone is worth the read.
Read more
Helpful
Report abuse

Peter
4.0 out of 5 stars US foreign policy : An history of disarray without order
Reviewed in the United Kingdom on 18 January 2018
Verified Purchase
Richard Haass has a strong feeling with subject matter hand. That not surprising as he worked within the US foreign policy establishment for many years.
He puts forward a strong case regarding new world order with America at its heart.
The new afterword for paperback edition looks at Trump's approach towards foreign policy. Its not great.
An interesting read going behind the thinking of policy wonks in Washington.

Very readable and absorbing. One gets a clear picture of what's at stake in this tumultuous time.

Amazon Customer
3.0 out of 5 stars A good summing up
Reviewed in India on 4 March 2017
Verified Purchase
Not very indepth but describes the situation succinctly from an American viewpoint.a good macro summary of events as they exist currently.
Read more
Report abuse

Lee
5.0 out of 5 stars Richard Haass is an intelligent and insightful writer.
Reviewed in Canada on 27 January 2018
Verified Purchase
An excellent, intelligent book. Highly recommended.
Read more
One person found this helpful
Report abuse
See all reviews
Back to top
Get to Know Us
Make Money with Us
Let Us Help You
And don't forget:
© 1996-2021, Amazon.com, Inc. or its affiliates