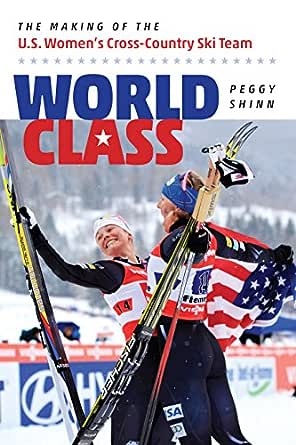 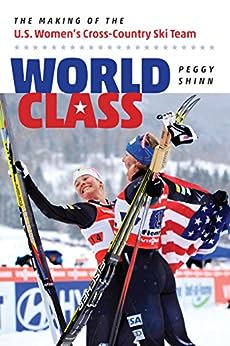 PEGGY SHINN is a senior contributor to the U.S. Olympic Committee's website, TeamUSA.org, and a former contributing editor to Ski Racing magazine. She is the author of Deluge: Tropical Storm Irene, Vermont's Flash Floods, and How One Small State Saved Itself. --This text refers to the paperback edition.

World Class: The Making of the U.S. Women's Cross-Country Ski Team. . . is a marvel, and I now have a bunch of new heroes - or, mostly, heroines. . . . [The book] is authoritative, fun, perceptive, well-researched and very well-written - drawing you in by telling stories and painting pictures of people and their times. . . . World Class doesn't simply give you rare insight into how the Team works - it's like being adopted into a particularly close-knit family.-- "SkiTrax.com"

"[An] enthralling account. . . . This is a timely book, not only because the members of US cross country ski women's team have been reaching the podium more regularly in the last few years, but because of the prominence of women's issues and current events in today's world."-- "XC Ski Resorts.com"

"Coaches, competitors, female athletes in general, and parents of competitors will find this a good read as will anyone interested in learning more about what it takes to get to the Olympics, or why colorful socks matter."-- "SnoCountry"

"A comprehensive account of the ski team that serves as a reminder that it's the journey, not the destination, that matters most."-- "Library Journal" --This text refers to the paperback edition.

Nancye Rahn
5.0 out of 5 stars First Class Book on a First Class Team
Reviewed in the United States on 19 April 2018
Verified Purchase
I must admit that I am biased, but I loved this book. I spent 8 years working with U.S. Ski and Snowboard and the Cross Country teams and their coaches were some of my absolute favorite people. Reading this book brought back a lot of memories, but it also taught me things that I didn't know about this group. I am in complete awe of the athletes and their coaches for what they have built. In 2014 I only had the opportunity to attend the Women's 30km in Sochi. As I watched the race unfold, I cheered for the four women representing the USA as tears ran down my face. I was disappointed for them (never in them) because I knew they had results leading into the Olympics and would have more post Olympics. But since the USA only pays attention to those who win medals, I wanted that for them. This year I was up early for each race during the 2018 Olympics so I could support them in real time. There were cheers, prayers and tears when Kikkan and Jessie won that first gold medal in the team sprint. I hope that between that result and this book that more people will realize what an amazing group of women represent us in Cross Country. I cannot wait to see where the future takes these women.
Read more
One person found this helpful
Helpful
Sending feedback...
Thank you for your feedback.
Sorry, we failed to record your vote. Please try again
Report abuse

Amazon Customer
5.0 out of 5 stars A book for ANY person interested in sports or of sports.
Reviewed in the United States on 4 June 2018
Verified Purchase
I have been a recreational cross country skier for decades in Eastern Oregon. I have faithfully watched the sport in the Olympics since 1976. This book opens up little mini worlds of the history of the women's USA team, the individuals, the team, the psychology of "team", cross country country skiing in general... and was fascinating to read. Loved it! I might also add Kikkan Randall is one of thr 5 most inspiring female athletes of the last 50 years.
Read more
One person found this helpful
Helpful
Sending feedback...
Thank you for your feedback.
Sorry, we failed to record your vote. Please try again
Report abuse

Maggie Powers
5.0 out of 5 stars Fun and motivating read
Reviewed in the United States on 15 August 2018
Verified Purchase
This is a great book for nordic ski enthusiasts but also for people who are interested in reading about team dynamics, dedication, and hard earned success. This book was published before the 2018 Olympic Games. The outcomes of those competitions for the US cross country team only make this book's message stronger. Well researched, and thoughtfully presented. Enjoy!
Read more
2 people found this helpful
Helpful
Sending feedback...
Thank you for your feedback.
Sorry, we failed to record your vote. Please try again
Report abuse

Calif Ellyn
5.0 out of 5 stars Great inside look at the sport of cross-country skiing
Reviewed in the United States on 7 April 2018
Verified Purchase
This is such an important and knowledge filled book! The author gives us an inside peek at what goes into being a cross-country ski champion. Well written.
Read more
Helpful
Sending feedback...
Thank you for your feedback.
Sorry, we failed to record your vote. Please try again
Report abuse
Load more international reviews

CAROL S. MONTGOMERY
5.0 out of 5 stars great, exciting book. It is extra exciting knowing the results of the last Olympics for
Reviewed in the United States on 8 December 2019
Verified Purchase
Kikkan and Jesse. You find yourself cheering for them all the way. I love seeing the growth of Nordic skiing. Thanks
Read more
Helpful
Sending feedback...
Thank you for your feedback.
Sorry, we failed to record your vote. Please try again
Report abuse

Richard L. Nesbitt
5.0 out of 5 stars LOVED this book
Reviewed in the United States on 10 July 2018
Verified Purchase
LOVED this book. We're Nordic skiers, so it was a natural, but Shinn writes well about this "dream come true"
Read more
Helpful
Sending feedback...
Thank you for your feedback.
Sorry, we failed to record your vote. Please try again
Report abuse