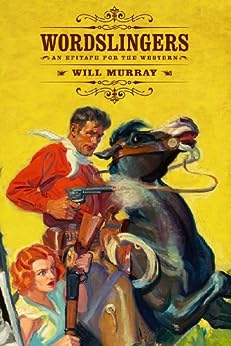 Wordslingers: An Epitaph for the Western Kindle Edition

by Will Murray (Author) Format: Kindle Edition
See all formats and editions
Sorry, there was a problem loading this page. Try again.
The Writers of the Purple Wage have long since taken the last trail into dusty memory. But, now, they live again--to retell tall tales of those distant days when they helped forge the fabled West of American Imagination.

* The POPULAR hacks!
* The SPICY bestsellers!
* The THRILLING myths!

Together, IN THEIR OWN WORDS, these veteran pulpsters & others offer startling inside stories of how they created the mythology of the Golden West!

WORDSLINGERS: AN EPITAPH FOR THE WESTERN
Read more
Previous page
Next page

Joseph Wrzos
5.0 out of 5 stars Will Murray, Saddling Up
Reviewed in the United States on 6 July 2013
Verified Purchase
I've always loved a good Western. Whether in the
now outmoded pulp magazines I read as a kid, or
the Old-Time radio shows (like GUNSMOKE or
THE LONE RANGER) we all listened to so
avidly back then, and, of course, wolfing down
loads of buttery popcorn, while watching Gary
Cooper's HIGH NOON on the silver screen, or
TV repeats of same, along with exciting new
shows like CHEYENNE and RAWHIDE. And
I've always wondered, especially of late, why
and whence this once highly popular genre
(in all the media) somehow quietly managed
to end us this side of Boot Hill.

Now, thanks to Will Murray's ambitious
and deftly documented WORDSLINGERS (what
a terrific title that is!), subtitled "An Epitaph
for the Western," at last we have some answers!
Thanks to lots of extensive reading, diligent
research, and canny culling of first sources -- not
only in the pulp Western magazines themselves,
but in collateral memoirs, letters, and articles
written by the original pulpsters, their editors
and agents themselves -- we have pertinent
and reliable data to work with.

Murray shows how, after the emergence of the
Western story in early novels like James Fenimore
Cooper's THE LAST OF THE MOHICANS (featuring
Natty Bumppo) and in more literary treatments
by luminaries like Bret Harte, Mark Twain, and
Stephen Crane, genre quality dipped noticeably
with the wildly popular, but meretricious, cheaply
printed Dime Novels (such as BUFFALO BILL,
DIAMOND DICK, THE JAMES BOYS, and the like),
which proliferated at the turn of the century.
Followed, in the early 20th century, by the
emergence of better written, though often
formulaic yarns in all-Western pulps like
Street & Smith's WESTERN STORY MAGAZINE,
which became so popular that for a time it was
published weekly!

In quite illuminating and entertaining fashion,
Murray goes on (abetted by aptly chosen
quotes from major and minor practitioners
in the pulp Western and tangential fields),
to clarify at least my own concerns about the
demise of the genre. (Why? How? What really
happened?) And he does so most satisfyingly.
Which makes me pretty sure that even for
those with only a lapsed or passing interest
in the Western story, whether in pulp or
paperback form, on TV, or as an occasional
Hollywood big budget summer blockbuster -
like the latest remake of THE LONE RANGER,
in which a culturally updated Tonto gets the
best lines! - Will Murray's WORDSLINGERS,
for so many reasons besides genre interest,
would prove to be a most enjoyable and
highly informative read.
Read more
9 people found this helpful
Report abuse

Amazon Customer
5.0 out of 5 stars Western Pulp History
Reviewed in the United States on 1 July 2021
Verified Purchase
This is a great book for anyone interested in the rise and fall of the western pulp magazines. Thoroughly researched and presented in an interesting, enjoyable way.
Read more
Report abuse

Charlie Aukerman
5.0 out of 5 stars Highly recommended for pulp fiction fans
Reviewed in the United States on 30 April 2015
Verified Purchase
If you grew up in the pulp era, like I did, you'll remember that western pulps outnumbered all others on the newsstand. Will Murray explains why and illustrates how the pulp market worked for writers, some of whom became very well known through television and movie adaptations of their stories, and some of whom simply made a living and remained anonymous. This is a great reference book for anyone interested in the pulps or westerns in general.
Read more
Report abuse