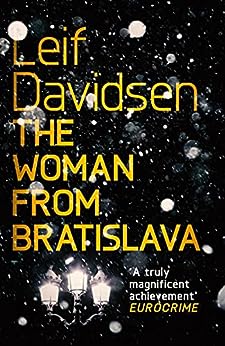 The Woman from Bratislava Kindle Edition

by Leif Davidsen (Author), Barbara J. Haveland (Translator) Format: Kindle Edition
See all formats and editions
Sorry, there was a problem loading this page. Try again.
In Bratislava, Teddy Pedersen, a middle-aged, Danish university lecturer, receives a visit from an Eastern European woman who turns out to be his half-sister. Father to both of them was a Danish SS officer who had officially been declared dead in 1952, but had in fact lived on in Yugoslavia for many years. In Copenhagen, Teddy's older sister is arrested on suspicion of being a Stasi agent, and a murder leads Teddy - and the Danish intelligence service - to investigate the relationship between these two - the woman in Denmark and the woman in Bratislava. The link between them proves to have far-reaching personal and political consequences.
Read more
Previous page
Next page

'One of Denmark's top crime writers' - The Sunday Times on The Serbian Dane --This text refers to an alternate kindle_edition edition.

Leif Davidsen is a Danish journalist who has worked for many years for Danish radio and television as a foreign correspondent and editor of foreign news. Arcadia published The Serbian Dane in 2007, his second work to be shortlisted for the CWA Ian Fleming Steel Dagger Award. The Woman from Bratislava was a No. 1 bestseller on publication. --This text refers to an alternate kindle_edition edition.

3.7 out of 5 stars
3.7 out of 5
17 global ratings
How are ratings calculated?
To calculate the overall star rating and percentage breakdown by star, we don’t use a simple average. Instead, our system considers things like how recent a review is and if the reviewer bought the item on Amazon. It also analyses reviews to verify trustworthiness.

Simon Clarke
5.0 out of 5 stars A Rich and Enjoyable Thriller
Reviewed in the United Kingdom on 23 December 2009
Verified Purchase
This is a riveting grand-scale thriller,which I found to be
the author's best novel to date.
It is set in 1999 against the backdrop of Nato forces air
strikes on Yugoslavia. Teddy Pedersen,an academic modern
historian,whilst in Bratislava has an unexpected encounter
with a Croatian woman,who turns out to be his half-sister.
Their father was a Danish SS Officer who fought for the Nazis.
Meanwhile in Denmark,Teddy's sister,Irma, has been arrested on the
allegation of being a spy for the East German Stasi.Per Toftlund
(who featured in Davidsen's previous novel)leads the investigation
against her.
The story develops by focusing in turn on the three main characters,
Teddy,Irma and Per,and takes us to Poland and Albania. It gives
insights into the Balkan conflict and how post-war the Danes treated
Nazi sympathizers--but importantly it remains a rich and thoroughly
enjoyable thriller.

G. D. Busby
3.0 out of 5 stars Just a tad too long
Reviewed in the United Kingdom on 28 August 2012
Verified Purchase
Yes, this novel is just that little too long plus the typos seem to increase in the last fifty or sixty pages. Why? It's maddening to see one of the key characters spelled Toftlund (correct) or Toflund. Sloppy.

Multiple locations, fair range of characters. Both handled well. The use of the "pictures" device imagined by Teddy works well and does add to the overall image. If this novel had ended at 320 pages, I would be more inclined to give it four out of five.
Read more
One person found this helpful
Report abuse

K. Charters
5.0 out of 5 stars Another Nordic "must-read"
Reviewed in the United States on 16 February 2011
Verified Purchase
Davidsen must be ranked alongside Mankell, Fossum, Nesbo, Indridason and the other Nordic notables. This is an effort that sheds insight into wartime, post-war, and modern Europe, as well as the radical waves of the 1970's. It particularly illustrates the striking differences that exist between bordering and nearby nations of the continent as opposed to, say, the homogenic states of the United States. The reader realizes the chasms that exist between the national entities of Europe forged by centuries of wars, alliances, ethnic hatreds and long memories. The events take place in 1999 as the Balkins once again implode and a recently expanded NATO finds itself politically and morally required to respond. The story is multi-faceted in both its cast of characters and subject matter. The characters include two brothers, a sister, and a foreign half-sister, all diverse in politics,age and temperament; all sired by a Danish father who served as a Nazi SS officer during the war. The other principle is a Danish Secret Service agent whose simplistic black and white moral outlook and sense of duty drive his actions. The agent, Toftlund, is surrounded by colleagues, contemporaries, and acquaintences who do not share his idealism and are far more guided by pragmatism in their outlook. Double and triple agents and duplicitous governments prevail and Toftlund must deal with the results. Leif Davidsen does a remarkable job in addition to creating a novel of suspense and enjoyment. He accomplishes two things that are typical of the really fine writers; he explains the national schizophrenia that afflicted many nations of Europe when faced with both the German war machine and its vision of a super continent. Collaboration, resistance and neutrality pulled the populations apart, and decades later were choices that the people wished to forget. Lastly, Davidsen has the unique and uncanny ability, along with his peers, to make the reader see, smell andfeel the atmosphere of the locales where events are occuring. I would be remiss if I were not to repeat my favorite quote in the book--one that warmed my old radical soul. The character,Irma, on page 251, says "You and I know that the conservative press is as easily bought as a Hamburg whore."
Read more
7 people found this helpful
Report abuse

Leah
1.0 out of 5 stars Didn't think this book was worth finishing
Reviewed in the United States on 31 December 2013
Verified Purchase
I loved Lime's Photograph by Leif Davidsen and wanted to read more. It was so well crafted, the timing impeccable, and the mystery unfolded so well. I expected the same level of craft, at the very least, to be in his other books. The Woman from Bratislava was reactive, disjointed and not well crafted. The main character in the first part was an over-the-top angry, self-absorbed, aggressive man using much profanity. It was a grueling experience getting through that. I persisted because I thought surely Leif Davidsen has something better to offer. Then the first part finally ended and the second part started. It was disjointed, boring and just droned on and on. I finally decided that, no, Leif Davidsen, was not going to provide something for me and I abandoned the book. He is an excellent author and this book was not one worth reading in my opinion. I hope to find another Lief Davidsen book that is as interesting and well crafted as Lime's Photograph. I was so turned off by The Woman of Bratiislava, however, that I have stopped reading Davidsen and discovered Henning Mankell whose books I have been reading for months. He is a consistently excellent writer in all of his books. I just finished reading all of the the Kurt Wallander series and recommend them highly.
Read more
One person found this helpful
Report abuse
See all reviews
Back to top
Get to Know Us
Make Money with Us
Let Us Help You
And don't forget:
© 1996-2022, Amazon.com, Inc. or its affiliates