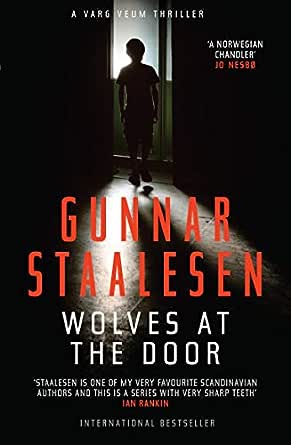 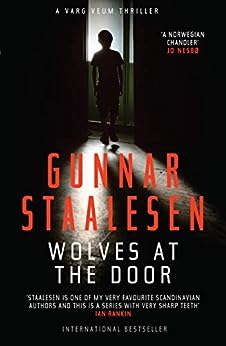 "This is a series with very sharp teeth." --Ian Rankin

"Staalesen continually reminds us he is one of the finest of Nordic novelists." --Financial Times

"Not many books hook you in the first chapter--this one did, and never let go!" --Mari Hannah, author, The Insider

"Almost forty years into the Varg Veum odyssey, Staalesen is at the height of his storytelling powers." --Crime Fiction Lover

The wolves are no longer in the dark … they are at his door. And they want vengeance…

The next instalment in the international, bestselling Varg Veum series by one of the fathers of Nordic Noir …

‘Gunnar Staalesen is one of my very favourite Scandinavian authors. Operating out of Bergen in Norway, his private eye, Varg Veum, is a complex but engaging anti-hero. Varg means “wolf” in Norwegian, and this is a series with very sharp teeth’ Ian Rankin

One dark January night a car drives at high speed towards PI Varg Veum, and comes very close to killing him. Veum is certain this is no accident, following so soon after the deaths of two jailed men who were convicted for their participation in a case of child pornography and sexual assault … crimes that Veum himself once stood wrongly accused of committing.

While the guilty men were apparently killed accidentally, Varg suspects that there is something more sinister at play … and that he’s on the death list of someone still at large.

Fearing for his life, Veum begins to investigate the old case, interviewing the victims of abuse and delving deeper into the brutal crimes, with shocking results. The wolves are no longer in the dark … they are at his door.

‘Not many books hook you in the first chapter – this one did, and never let go!’ Mari Hannah

‘With an expositional style that is all but invisible, Staalesen masterfully compels us from the first pages … If you’re a fan of Varg Veum, this is not to be missed, and if you’re new to the series, this is one of the best ones. You’re encouraged to jump right in, even if the Norwegian names can be a bit confusing to follow’ Crime Fiction Lover

‘With short, smart, darkly punchy chapters Wolves at the Door is a provocative and gripping read’ LoveReading

Kindle Customer
5.0 out of 5 stars Great book
12 July 2019
Format: Kindle EditionVerified Purchase
Crime readers and those who like Nesbo and Mankell, detective novel lovers will enjoy this and other books by this author
Read more
Helpful
Comment Report abuse
See all 1 customer reviews
Write a customer review

Yvo @ It's All About Books
5.0 out of 5 stars Brilliant piece of Nordic Noir
15 June 2019 - Published on Amazon.com
Format: Kindle Edition
Wolves At The Door is already the twenty first installment of the Varg Veum series, but as I was promised with the previous books, the story works really well as a standalone as well. The only thing that is bound to happen is that you, like myself, will be left wanting to spend more time with a new favorite character and end up reading the previous books anyway as soon as you can find time for them... Because such is the power of Varg Veum. I can understand why this series has been going on for as long as it has, because Varg Veum is a force to reckon with. He is one of those characters that I connected to immediately and profoundly. As soon as you read the first chapter, he feels familiar and it's as if you have known him for ages already. His description, his way of seeing the world, his attitude, the way he speaks, reacts and deducts information from what he learns along the way, his humor... Meeting Varg Veum was like seeing an old friend again after a long time apart, knowing you won't let him slip this easily from your life again now he's back in the picture. I don't often feel a connection this strong to a character after such a short time, but consider me officially on #TeamVargVeum from now on.

Varg Veum is not the only thing that makes Wolves At The Door into such a success for me. A lot of it had to do with both the writing style itself and the many detailed descriptions making the cold Nordic setting truly come alive. I haven't had the chance to visit Norway yet, but I feel like I really got to know Bergen and its surroundings while reading Wolves At The Door. The detailed descriptions of not only the setting, but also the characters added a lot of dept to what was already an intriguing plot and gave the story a ominous and sinister atmosphere. The writing itself is excellent; we have the wonderful translation by Don Bartlett to thank for that, because we wouldn't have been able to enjoy this Nordic Noir gem otherwise. While the pace is slower in especially the first half of the story, it never really slowed me down as I saw it as an opportunity to get to know Varg Veum and other key characters better. The writing style and humor was spot on for me and I've become an instant fan of Gunnar Staalesen's work. As things are getting more heated for Varg Veum, the pace as well as the suspense pick up... Making you move towards the edge of your seat while you keep your fingers crossed everything will work out in the end.

Wolves At The Door deals with a very difficult topic, one that is trigger warning worthy: child abuse. An emotionally harrowing topic and very hard to write or read about, but I feel that Gunnar Staalesen has tackled the subject in an honorable and realistic way. It doesn't make it easier to read about both the past case (I imagine has been discussed in the previous book I can't wait to read now) and the new discoveries our main character Varg Veum makes as he follows his intuition... But it justifies going down that road and explore such a sensitive theme. The story will probably provoke strong emotions though, and you will definitely feel anger towards certain characters and events before you reach the final page. Of course, it's always a good sign a story is able to make you feel such strong emotions in the first place... And there is no doubt whatsoever that Wolves At The Door is a brilliant piece of Nordic Noir and a harrowing story that will touch even those with the coldest heart.
Read more

The booktrail
4.0 out of 5 stars Crime fiction set in Bergen! Varg Veum's toughest case yet
10 June 2019 - Published on Amazon.com
Format: Kindle Edition
Norway’s favourite private investigator – Varg Veum – is back and this is one tough case. He’s investigating the deaths of two men accused of the most heinous crime of all – child abuse – a crime he was once wrongly accused of himself. With the deaths and no one taking an interest in them, Varg fears he might be next. So this case is more personal than most.

The issue of child abuse is not an easy or comfortable one to read about and this does make for some very tough reading at times. This nature of crime makes it understandable why no-one seems bothered about their deaths. The authorities however show a worrying lack of interest and so the scene is set for Varg to take on this personal case. He takes the investigation to heart and carries the reader along for the bumpy yet interesting ride.

Varg is like a dog with a bone. He never lets go of what he’s hunting. In this case, everyone is hiding something and there are some very dark discoveries along the way. The pace matches the story – slow and measured – and that fits well pulling you along with time to reflect.

Although child abuse is a central theme, sex-trafficking and the failings of the justice system and police investigations are also examined. It’s a dark read but one deftly handled by Gunnar and of course Don Bartlett.
Read more

Go to Amazon.com to see all 2 reviews 4.5 out of 5 stars
Get FREE delivery with Amazon Prime
Prime members enjoy FREE Delivery and exclusive access to movies, TV shows, music, Kindle e-books, Twitch Prime, and more.
> Get Started
Back to top
Get to Know Us
Make Money with Us
Let Us Help You
And don't forget:
© 1996-2020, Amazon.com, Inc. or its affiliates