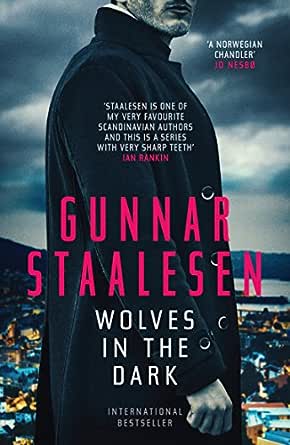 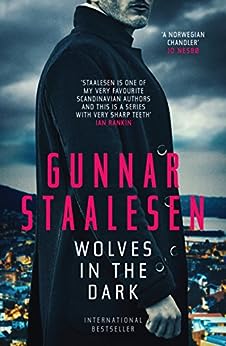 Reeling from the death of his great love, Karin, Varg Veum’s life has descended into a self-destructive spiral of alcohol, lust, grief and blackouts.
When traces of child pornography are found on his computer, he’s accused of being part of a paedophile ring and thrown into a prison cell. There, he struggles to sift through his past to work out who is responsible for planting the material … and who is seeking the ultimate revenge.
When a chance to escape presents itself, Varg finds himself on the run in his hometown of Bergen. With the clock ticking and the police on his tail, Varg takes on his hardest – and most personal – case yet.
Chilling, shocking and exceptionally gripping, Wolves in the Dark reaffirms Gunnar Staalesen as one of the world’s foremost thriller writers.

'There is a world-weary existential sadness that hangs over his central detective. The prose is stripped back and simple … deep emotion bubbling under the surface – the real turmoil of the characters’ lives just under the surface for the reader to intuit, rather than have it spelled out for them’ Doug Johnstone, The Big Issue

'Staalesen's storytelling draws you in and leaves you breathless all the way to the end, and like a fine wine, always leaving you wanting more, but you know you blood pressure could not take it’ Atticus Finch

Anne Whight
TOP 500 REVIEWER
4.0 out of 5 stars Intriguing and shocking
7 September 2017
Format: Kindle EditionVerified Purchase
Another intriguing fast paced tale from Gunnar Staalson. A well translated and gripping read, like his others, but this time he challenges the reader with child prostitution, so it's an emotional and more difficult read. Varg Veum, PI, is discovered with child pornography on his computer, and he crawls out of his alcoholic haze and his unremembered past, to find the truth. Is he guilty, or not?
Read more
One person found this helpful
Helpful
Comment Report abuse

C Knight
TOP 500 REVIEWER
4.0 out of 5 stars Watch who you annoy!
9 June 2017
Format: Kindle Edition
Wolves in The Dark is a who’s who of the people that private investigator Varg Veum has peed off in his period of darkness after he lost the love of his life. Veum has to work through his very clouded (aka drunk) memory about who he was engaged by and what was the case he was investigating. By doing this, he’s opening old wounds, ripping off some very old plasters with limited knowledge to start with. But as he picks and rips, he gets flashbacks which shine a brief light on the web of secrets his memory is hiding. How much this will help him find the vindictive soul who has set him up in what is frankly an awful situation, only following the clues and flashbacks will tell him. The person/people are truly wolves in the dark of Veum’s memory.

This tale kept me guessing all the way through – I really had no idea who had set Veum up. Even with the suspects laid bare in front of me on the page, Staalesen kept me in the dark as to what was the real truth. The plotted history of Veum’s investigations that I read was varied and in his drunken state, he never did solve the case in hand – does he in sobriety?

I really like Staalesen’s writing, I don’t know if it’s because of his own personal style or he writes in a Scandinavian/Nordic style, but it’s very different to my normal read of more anglicised authors. My normal skim-reading style goes out the window and I slow right down. I seem to do this for most translated crime and weirdly Agatha Christie’s novels but that is beside the point. This is the second Veum novel I’ve read; somewhere buried on my kindle is We Shall Inherit The Wind – I need to get this read!

I have to say, I love the cover to this book. The pink really stands out against the dark background – simple yet dark!

A big thank you to Karen Sullivan and Anne Cater of Orenda Books for my copy of Wolves in the Dark.

Edwin O. Bailey
3.0 out of 5 stars A good map of Bergen
13 October 2017 - Published on Amazon.com
Verified Purchase
Staaleaen uses a very clever device to set up the "who done it" which allows clues to be revealed throughout the story with lots of misdirections. His portrayal of the Norwegian criminal justice system, especially the limited rights of defendents, serves to make the action compelling as well as unnerving. If accurate, one would certainly not want to be arrested in Norway! A good map of Bergen, scene of all the action, would be helpful.
Read more
3 people found this helpful

Kindle Customer
2.0 out of 5 stars Nope - ridiculous
2 October 2017 - Published on Amazon.com
Verified Purchase
Barely believable and some of the silliest private investigator interrogations/behaviors imaginable. Don't waste your money. I only gave it a generous two stars because: 1 - it started off well, (but then fell apart), and 2 - the ending had a nice twist.
Read more

Varg Veum has such appeal for me.  I do like my main protagonists a little battered and bruised around the edges so he ticks the boxes.  I couldn't, at the start of the novel, see how Veum was going to get himself out of the fix he was in.  After all, how can he prove he's innocent when all of the evidence says otherwise and he's locked in a cell!  I thought the author did an excellent job of working around this problem.  The plot flowed well and didn't feel at all forced.  I enjoyed how many suspects Veum came up with, those looking for the ultimate revenge on our beleagured PI.  As the list grew I became even more intrigued by Veum than I was previously.  He's certainly not one to tread lightly when on the hunt for a suspect!

I did, however feel a little confused at times as there are so many different threads within the investigation, and quite a few Norwegian names (as you would expect!).  So I ended up re-reading several sections to make sure I knew the characters and how they connected to one another.  Saying that, Staalesen is a master at what he does and, after reading Wolves in the Dark it reminded me exactly how much I want to read all of the other Veum novels (those which have been translated to English, of course!  My Norwegian is still....let's say rusty, lol).

This is a very dark novel and not one for the faint-hearted.  If you've read the blurb you will know that there is mention of child abuse throughout the story but the author manages to steer clear of anything too graphic, most of the time.  There is one scene which I found upsetting, but I can't see how else this would be dealt with as it's key to the plot.  The scene in question is brief and referred to only a couple of times in passing throughout the remainder of book.

Would I recommend this book?  I would but it's a hard read in places due to the subject matter.  Don't let that put you off though as Veum is an addictive character and Staalesen is a master of the thriller.  And aren't books supposed to make us all feel a little uncomfortable at times?  I, for one, am looking forward to the next instalment and meeting up with Veum once again.  And this is a perfect opportunity to wish a very happy 40th anniversary to Gunnar Staalesen and Varg Veum, long may this excellent series continue.

Four out of five stars.

I chose to read and review an ARC of Wolves in the Dark.  The above review is my own unbiased opinion.


Read more
3 people found this helpful
Go to Amazon.com to see all 14 reviews 3.8 out of 5 stars
Get FREE delivery with Amazon Prime
Prime members enjoy FREE Delivery and exclusive access to movies, TV shows, music, Kindle e-books, Twitch Prime, and more.
> Get Started
Back to top
Get to Know Us
Make Money with Us
Let Us Help You
And don't forget:
© 1996-2020, Amazon.com, Inc. or its affiliates