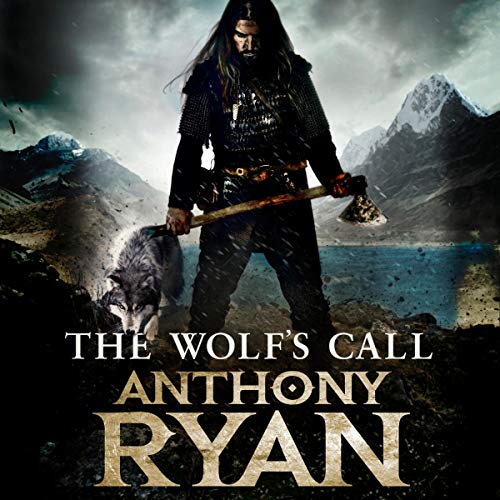 The Wolf's Call: Book One of Raven's Blade

4.5 out of 5 stars
4.5 out of 5
1,266 global ratings
How are ratings calculated?
To calculate the overall star rating and percentage breakdown by star, we don’t use a simple average. Instead, our system considers things like how recent a review is and if the reviewer bought the item on Amazon. It also analyses reviews to verify trustworthiness.

CJF
TOP 500 REVIEWER
5.0 out of 5 stars Masterpiece!
Reviewed in Australia on 19 August 2019
Verified Purchase
This was one hell of a great read. The Tower Lord is back as a new threat rises. Old friends and new players join in travelling to lands distant and exotic, becoming embroilled in the new conflict. People gifted with magical powers are used cleverly by both sides to try and turn the tides of conflict. The odds are heavily against our heroes as the enemy seems to have all the answers and disaster looms. Then, what an ending! This was a fantastic return to the world of the Raven’s Shadow. Read it - you will not be disappointed.
Read more
Helpful
Report abuse

Rod Baxter
TOP 1000 REVIEWER
5.0 out of 5 stars Welcome Back Vaelin
Reviewed in Australia on 1 July 2020
Verified Purchase
Anthony Ryan, has to be one of my favorite authors. The reason being, he writes fantasy fiction well. He never disappoints. His characters are strong. His plots are complex. He builds suspense, intrigue and action, to the point where page turning is automatic. The reader is involved in every scene. I find that I become invested in the story from very early in the book. I know that I am going to enjoy the next installment in this series. I preordered the second book and look forward to reading it.
Read more
Helpful
Report abuse

WONTOLLA
4.0 out of 5 stars GOOD, but could be better.
Reviewed in Australia on 13 October 2019
Verified Purchase
I would give it four and a half stars.
It just didn't have the punch and flow of "Blood Song," which to my mind is one of the best books I have ever read.
It just dallied too long on background of the various characters, and not until the last line, literally, did the author do anything about restoring Valin's "gift."
Although I am being negative, this book is a good read, and I commend it to potential readers. I have high expectations for Book Two.
Read more
Helpful
Report abuse

Luke
5.0 out of 5 stars The best series is back!
Reviewed in Australia on 10 August 2019
Verified Purchase
Can't wait for the next book. Will be listening to all 4 again in preparation. Perfect series, excellent, author and narrator.
Read more
2 people found this helpful
Helpful
Report abuse

Ryan
5.0 out of 5 stars Great Read
Reviewed in Australia on 31 May 2021
Verified Purchase
Excellent extension of the original trilogy. A fantastic read but do be sure to check out the originals first or this won't make nearly as much sense.
Read more
Helpful
Report abuse

Cassy
4.0 out of 5 stars Looking forward to the rest of the series!
Reviewed in Australia on 20 October 2019
Verified Purchase
Apart from some slightly monotonous battle scenes, a great read. Good segway into the new series. The audible narrator's skill is evolving positively, love it.
Read more
Helpful
Report abuse
See all reviews

S. Mc GOWAN
5.0 out of 5 stars A great return to form
Reviewed in the United Kingdom on 26 July 2019
Verified Purchase
I feel this edition has revived and rejuvenated the previous series. I really enjoyed this book and see it as a return to form for Anthony Ryan. If you read Queen of Fire and felt it a poor ending this book goes some way to moving past that and looking at some unanswered questions and plot issues.
Read more
12 people found this helpful
Report abuse

Taramriel
5.0 out of 5 stars Anthony Ryan's Writing Talent (and Vaelin) Returns!
Reviewed in the United Kingdom on 2 August 2019
Verified Purchase
If you loved Book 1 (Blood Song) of Raven's Shadow, then you will absolutely love this book! A return to form for Anthony Ryan who had suffered significant criticism for Tower Lord and Queen of Fire. Instead, the first book in the new trilogy, The Wolf's Call, returns the story focus and first-person narrative directly back to the legend, Vaelin Al Sorna, former brother of the Sixth Order and all-round hero of the Realm.

Please note that it's really only necessary to have read Blood Song and Tower Lord to enjoy the new book. You do not need to read Queen of Fire.

The writing reminded me strongly of Blood Song and really develops Vaelin's story ten years after the conclusion of the Realm war with the Alpiran Empire. We see many of our favourite characters return and the introduction of some compelling and super-interesting new characters, as well as a journey into the mystical West where a new (but slightly familar) terrifying threat is emerging. We also see the long-awaited return of a fan favorite, SISTER SHERIN!

Buy this book and enjoy! This is the start of a very exciting new trilogy and I hope Anthony Ryan continues using the same techniques that made Blood Song loved by so many - which he has succeeded doing here.
Read more
8 people found this helpful
Report abuse

Amazon Customer
5.0 out of 5 stars Vaelin is back and deadlier than ever!
Reviewed in the United Kingdom on 2 September 2019
Verified Purchase
The series returns to good form with Vaelin taking centre stage as the sole POV character - I almost grew to dislike Vaelin by the end of Queen of Fire with Frentis and Reva overshadowing him but Ryan has obviously taken peoples’ grievances against the last book into account and this new entry feels much more like Blood Song in its nature. Vaelin is back to being a reluctant badass, the sole focus of the book being on his personal journey with the story being better for it. The ally was also a massive letdown for me in Queen of Fire and Ryan has sought to rectify this with a very interesting and equally, if not more deadlier threat to Vaelin in the form of Khelbrand! He manages to bring Kehlbrand in with a neat tie in to a previously unresolved prophecy so it’s good to see past loose ended questions also being addressed in this new series. Vaelin is back! Ryan is back! Heck, even Sherin is back and better than ever in getting under our hero’s skin! The wolf calls puts Ryan back in the top tiers of heroic fantasy and I can’t wait for the next instalment! Haven’t you heard? There’s always another war!
Read more
6 people found this helpful
Report abuse

Clive
5.0 out of 5 stars NOT REALLY BOOK ONE
Reviewed in the United Kingdom on 9 September 2019
Verified Purchase
Well, firstly, I should make clear that I really enjoyed this book, so the headline isn't a complaint. But, honestly, this isn't a 'first in a new series' book! The 'Raven's Shadow' trilogy took us on a journey with Vaelin al Sorna, the Tower Lord and this book picks up exactly where the last in that trilogy left off; with the same characters. So this is, really, 'book 4' rather than 'book 1'. Of course, a newcomer to Mr Ryan could pick up this book and read it as a stand-alone novel but the back story that's packed into the previous trilogy is quite important to understanding the characters and their motivation.

The plot itself is pretty much the same as the earlier novels; an eclectic group of heroes using their powers to battle across a continent against overwhelming odds. Some die. Some live. Some are revealed as traitors. As always, it's the action that takes centre stage and that is, unfailingly, great.

Some series have each book ending as a 'chapter', with one part of the story reaching conclusion and setting the scene for the next portion of the story. Not here. This book ends very abruptly on what is deliberately intended to be cliff-hanger. As a kid (and I'm pretty old now), I remember the matinees in which that week's film ended with Batman going over a cliff to certain doom and you had to wait until next Saturday to find out if he really was dead (they always cheated). Well, that's what we have here.

So I'll be back to find out when Mr Ryan gets around to publishing the next in this series. Whether that's the 4th or the 2nd!
Read more
5 people found this helpful
Report abuse

Amazon Customer
5.0 out of 5 stars A return to what made the first raven’s shadow book so good
Reviewed in the United Kingdom on 25 August 2019
Verified Purchase
Won’t add any spoilers here other than to say if you liked the first Raven’s shadow book (which some might argue is his best to date), you’ll love this. It starts off a bit slow but this helps to reintroduce a few characters old and new. One of the best books I’ve read this year. Buy it.
Read more
4 people found this helpful
Report abuse
See all reviews
Back to top
Get to Know Us
Make Money with Us
Let Us Help You
And don't forget:
© 1996-2021, Amazon.com, Inc. or its affiliates