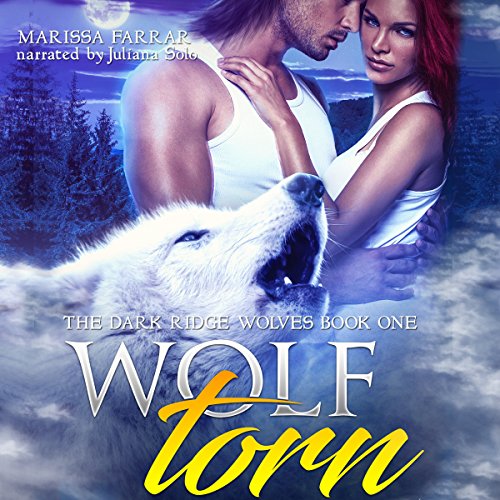 Susan Wallace
TOP 1000 REVIEWER
5.0 out of 5 stars Highly recommended.
Reviewed in Australia on 19 March 2017
Wolf Torn by Marissa farrar.
Ruby Gallagher is the niece of the alpha in her pack. Her alpha uncle Gregory has ordered her to mate with Holton Golding.
This was another fantastic read from marissa. I can't wait to read next part. I loved the story and the characters. Apart from Gregory that is. Definitely worth more than 5*. Thanks marissa.
Read more
Helpful
Report abuse
See all reviews

Lyn & Nino
5.0 out of 5 stars Amazing!!!!
Reviewed in the United Kingdom on 15 March 2017
Verified Purchase
I voluntarily reviewed an advanced reader copy of this book.

I absolutely adore this author's work and if anything this book made me adore her work even more, i read the first book in this series and loved it! This book starts not long after the first book finished butt doesn't include the main characters from the first book. This is a tale based back at the pack territory and you really get to see what sort of life that they have with the Alpha that they have got and the community that they live in.

The storyline to this book is highly addictive and trust me you won't be able to put this book down once you start reading, it grips you from the first page and everything else disappears. You become part of this story and that is one of the main things that i love about this author writes, she has the talent to create a seamless world full of imagination and vivid descriptions making the world feel real.

I love Ruby!!! She is extremely fiery and wilful but thats what makes me love her character so much more! She is young but she has a strong heart and you can see her actions are based on the things she has been through.I thought Holton was a brilliant character and i took to him as soon as he appears in this book and i adored seeing their relationship evolve and change.

I can't recommend this book highly enough , i adored this major page turner and it is seriously a must read!!!
Read more
Report abuse

D. Messing
4.0 out of 5 stars Well done!
Reviewed in the United States on 24 April 2017
Verified Purchase
This was a very solid follow up to Wolf Snatched, book 1 in the Dark Ridge Wolves Series. The ending of the first book leaves you both cheering on Alyssa, and cursing Gregory with everything in you. In the second the alpha follows right along that path and then gets even worse, his actions to maintain power made my inner feminist sit up and scream! I loved it when karma came into play, though I can't help feeling we may see him again later! Though short, it is well written, and gets a lot of action into just a few pages! Loved it and have already started the third in the series.
Read more
One person found this helpful
Report abuse

Gabrielle Rosenberger
5.0 out of 5 stars Amazing
Reviewed in the United States on 24 March 2021
Verified Purchase
The storyline was correlated to the first book and hopefully Joel will find his true mate in the next book. As the first it was amazing.
Read more
Report abuse

Kindle Customer
5.0 out of 5 stars Girls just want to have fun.
Reviewed in the United States on 6 September 2017
Verified Purchase
She lost her parents and was raised by her uncle and just wanted to run and have fun, he knew who his mate was and waited for her to be ready, read for the works behind the works behind the scenes.
Read more
Report abuse

Margaret
5.0 out of 5 stars Great read
Reviewed in the United States on 1 May 2017
Verified Purchase
If you like books with shifts jerks for alphas that think they know best. Rebel betas and action. This a great story line and a wonder 2nd book in the series.
Read more
Report abuse
See all reviews
Back to top
Get to Know Us
Make Money with Us
Let Us Help You
And don't forget:
© 1996-2021, Amazon.com, Inc. or its affiliates