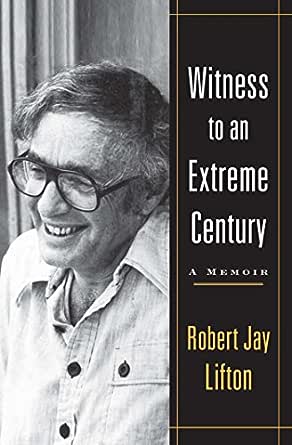 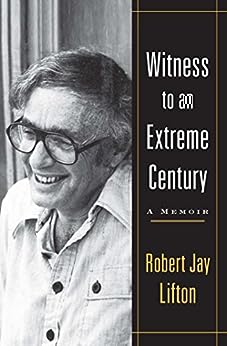 Witness to an Extreme Century: A Memoir Kindle Edition

“This stunning book brings alive the story of Robert Jay Lifton's struggles to understand the extremities of the last century to which he was indeed a remarkable witness. His has been a great journey, and we are all richer for his wisdom.” (Charles B. Strozier, author of Until the Fires Stopped Burning: 9/11 and New York City)

"Written with the verve of great storytelling and the precision of history, this memoir is a moral meditation that illuminates the age. An exquisite example of how intelligence, erudition, and depth of feeling combine to make redeeming wisdom. A stunning book." (James Carroll, author of Jerusalem, Jerusalem)

"Robert J. Lifton’s memoir offers a model of the relationship between introspection and ethical commitment. He writes gracefully and temperately, without rant or jargon, but his is a prophetic voice as he recognizes and names the habits of mind that produce our recurrent inhumanity, demonstrating the compatibility of passion and scholarly investigation – and the necessity for both as we try to acknowledge and transcend the horrors of our times and to take action for a positive future." (Mary Catherine Bateson, author of Composing a Further Life: The Age of Active Wisdom)

“Robert Jay Lifton has long served as one of the most important, and profound, witnesses of the 20th century. In this extraordinary memoir he explores his most vital and haunting work, in an engaging voice that is both wise and welcoming for readers." (Greg Mitchell, author of The Age of Wikileaks)

“A call for a moral awakening by a deeply compassionate chronicler of our times.” (Kirkus (starred review))

"Riveting...As a witness to an extreme century, Lifton continues to challenge us to denounce “the dreadful overall phenomenon we call war’’ and reclaim a role as life-affirming, life-enhancing healers." (Boston Globe) --This text refers to an alternate kindle_edition edition.

Robert Jay Lifton is a lecturer in psychiatry at Harvard Medical School and Distinguished Professor Emeritus of Psychiatry and Psychology at the City University of New York. The overall themes of his work have been holocaust and transformation. --This text refers to an alternate kindle_edition edition.

ProfZeb
5.0 out of 5 stars View into a Great MInd
Reviewed in the United States on 23 December 2018
Verified Purchase
Robert Jay Lifton was one of the 20th Century's greatest intellectuals. He spent his career studying how individuals responded to horror like the brainwashing of Westerners in China after the Korean War or the bombing of Hiroshima. In this book he carefully sets out his intellectual life. The writing is fluid and engaging and the subject fascinating.
Read more
One person found this helpful
Report abuse

Joseph Wronka
5.0 out of 5 stars A Wonderful Book by a "Wonderful" Person
Reviewed in the United States on 30 January 2012
Verified Purchase
This is an excellent life narrative by an amazing person who shares his life's work, which encompasses his passion and commitment, as an open book detailing as he says his "ethical struggles... which have always been.. secular ones." He is definitely a model for today's students, defined broadly to include anyone who wants to continually learn about "limits" of their profession (or the "philosophy of limits" as he refers to those words of Albert Camus, his "mentor" from afar), not only in the health and helping professions, but actually anyone who is open to positively creating a new life in response to fundamental existential questions, such as what does my life mean in the face of dying and death. But, as depressing as a question like that might be, his extremely varied work, including, but not limited to persons undergoing thought control in China, victims of the A-Bomb in Hiroshima, Nazi doctors, and soldiers returning from Vietnam, shows that midst a labyrinth of despair, there are always glimmers of hope, stories of people who have not caved in, but rather recreated themselves in response to extreme trauma, the Protean Self, as he calls this phenomenon. He is a model also in that throughout the book he continually talks about the scholar-activist model, referring at one point to the barking dog, waving its tail as something akin to the need for research and social activism to be of the same mind and body set so to speak.

A spiritual, but not religious person, I found it also rather interesting how he acknowledged his lack of religion in his life, yet, found himself paradoxically drawn to rather religious persons, when he spoke of his social activism with the Catholic Left and the Quakers. How he was able to act courageously in the face of injustice, writing specifically of his activism against the War in Vietnam before public sentiment turned in that direction, was also an extremely moving section and, again, illustrated an exemplary life of commitment and passion. While one could say he was rather privileged as a professor at Harvard and Yale and such appointments gave him a certain respectability, as a "well behaved radical" to use his words, still there were many professors at prestigious universities during that time who did not take risks as Lifton and others did. Also, as an American to interview A bomb victims in Hiroshima and as a Jew to interview Nazi doctors, are other examples of his courage and desire to be a searcher of truth, which is what research is all about.

I have used his works in my Qualitative Research class for some time now. He is an obviously excellent interviewer who is able to be very sensitive to the data, wherein he derives themes from his interviewee's words, such as survivor wisdom, psychic and selective numbing, milieu control, doubling, nuclearism, and totalism, all a bit too complicated to get into here, but are examples of "actionable knowledge," that could be used to create socially just policies. He speaks for example, of his concern for "nuclearism," that there are those who think that nuclear weapons will be the way to solve the world's problems, destroying it to recreate it anew (a phenomenon he calls roughly "totalism"), a terrible form of "omnicide" as he put it. But, the world can develop alternative constructive means to deal with such questions like renewal that are actually existential ones. It is here where I would like to add that creating a human rights culture, might be an adequate way to deal with such extreme and destructive responses to existential questions.

In the title of this review, I said that he is a "wonderful" person (but in quotes). What I mean is that to adequately grasp phenomenon one must be open to it, continually in awe and wonder at the multi-varied responses to extreme conditions. Robert Lifton does just that in this excellent work, by a man who admittedly says that all his life he has "craved adventure." He does not cave in so to speak to mathematical models of knowing, which admittedly may have a place, but rather is continually open to the world to the situations and words of the people he spoke with. Let me conclude, that as a man now in his eighties, he seems to be definitely on the integrity side of the Integrity vs. Despair continuum a notion developed by Eric Erickson, also his friend and colleague, whose relationship he recounts in a rather fascinating, yet typically "Liftonian" human and humane way.

Well enough "hero worship." Although the author did praise the anthropologist Margaret Meade, I thought, that in the final analysis he could have been a bit more sympathetic to (as I understood him) her occasional ramblings at social gatherings, which he said for lack of a better way of putting it as, "bullshit." That was really quite a heavy statement for one of the few notable women in his "repertoire" of friends and acquaintances. I am wondering how that sentence ever got past the publishers' peer reviewers if there were any. I was also at time a bit "taken aback" by all those what I call "social justice elites," all hanging out on beautiful summer evenings apparently on Cape Cod. I think it was Marquis de Sade that said that philosophy was a privilege of the upper classes, which somewhat came through as I read the book. Or, perhaps, I am just "projecting" to use a Freudian term and being a professor myself, I have also had the privilege to philosophize (broadly defined) over the years. Be that as it may, Dr. Lifton's views and the views of his Cape Cod entourage, such as Eric Erickson, did alot of influence the thinking and social justice actions of generations.
Read more
6 people found this helpful
Report abuse