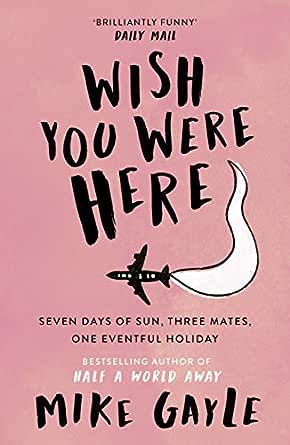 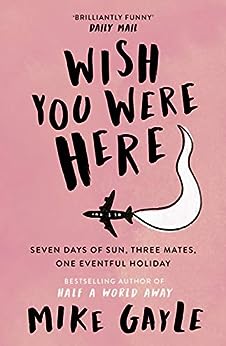 Wish You Were Here Kindle Edition

As you'd expect from Gayle, the laughs flow thick and fast, making this a top match for your sunny holiday spirits., Glamour

This book explores the strength of friendship, getting older and settling down with forthright honesty and humour. Wise, witty and with endearing characters, this is a feel-good read with lots of laughs., Woman

The prolific Mike Gayle knows a thing or two about the male psyche, and how not even an extended adolescence will prevent the pain from catching up in the end., Herald

If we needed more proof that men don't think like women, then Wish You Were Here delivers it in extra strength doses . . . A fun story of three 30 somethings as they come to rueful - and thankful - realisation that they are no longer 18., Candis

This book makes great beach reading . . . A heartwarming and funny tale., Love It!

A delightfully witty tale, Star --This text refers to an out of print or unavailable edition of this title.

Mike Gayle was born and raised in Birmingham. After graduating from Salford University with a degree in Sociology, he moved to London to pursue a career in journalism and worked as a Features Editor and agony uncle. He has written for a variety of publications including The Sunday Times, the Guardian and Cosmopolitan.

Mike became a full time novelist in 1997 following the publication of his Sunday Times top ten bestseller My Legendary Girlfriend, which was hailed by the Independent as 'full of belly laughs and painfully acute observations,' and by The Times as 'a funny, frank account of a hopeless romantic'. Since then he has written thirteen novels including Mr Commitment, Turning Thirty and The Man I Think I Know. His books have been translated into more than thirty languages.

You can find him online at mikegayle.co.uk and on Twitter @mikegayle.

A brilliant romantic comedy exploring beach basics for the broken-hearted from number one bestselling author Mike Gayle, author of MY LEGENDARY GIRLFRIEND, MR COMMITMENT, TURNING THIRTY and DINNER FOR TWO --This text refers to an out of print or unavailable edition of this title.

spot on, easy beach read. Just add sangria! - Independent'Mike Gayle's the guy to give us a tantalising insight into the way men's minds tick . . . this romantic romp is bound to be another huge success . . . a feel-good read with lots of laughs.' - WomanThis has the makings of another Mike Gayle classic . . . this is spot on, easy beach read. Just add sangria. - IndependentAs you'd expect from Gayle, the laughs flow thick and fast, making this a top match for your sunny holiday spirits. - GlamourAn observant offering - HeatThe prolific Mike Gayle knows a thing or two about the male psyche, and how not even an extended adolescence will prevent the pain from catching up in the end. - HeraldIf we needed more proof that men don't think like women, then Wish You Were Here delivers it in extra strength doses . . . A fun story of three 30 somethings as they come to rueful and thankful realisation that they are no longer 18. - CandisThis book makes great beach reading . . . A heartwarming and funny tale. - Love It! --This text refers to the paperback edition.
Read more

Tyler Durden
2.0 out of 5 stars Not Exactly Tolstoy
Reviewed in the United Kingdom on 23 September 2016
Verified Purchase
This is a light holiday read, so I wasn’t expecting Tolstoy but this is a really poor book.

Firstly, for much of the novel, nothing actually happens. We only get plot points starting to kick in about halfway through the narrative. Now, of course a novel does not HAVE to be plot-driven but this one clearly is; the characters are far too vaguely drawn for it to be anything else.

Secondly, the characters are utterly unconvincing as people. Heck, the central three men aren’t even convincing as men. At one point, Charlie (or should that be Charlotte) gets a hankering for some ‘retail therapy’. Seriously? A bloke on holiday in Crete – sun, sea, booze, birds – and he wants to go SHOPPING? He then agonises about what he’s wearing “My back-up ensemble, a pair of beige trousers and a white patterned shirt, had never been matched together before and though technically they should have had no trouble getting on together, for some reason the whole thing didn’t quite work.” Later, he complains about being “left on his own” for a day. Really, fella, dry your eyes and strap on a pair. The other two male characters are equally needy and the trio just don’t engage with each other as men do. I expected them to have a night in watching Dirty Dancing, drinking Cosmopolitans and experimenting with make-up. I know we’re meant to be all metrosexual these days but there’s a certain honesty and directness (and clumsiness) about how men relate to each other and it’s just not reflected in this book.

Thirdly, there are some odd factual errors. Gayle describes a Greek taxi driver as surly and resentful. When this same driver deposits Charlie and Tom in a village for the evening, the locals scrutinise the exotic incomers with suspicion. This is nonsense. Anyone who has visited Greece knows that they are some of the most friendly, courteous, welcoming folk in Europe. Gayle also seems to think that the cathedral in Heraklion is Roman Catholic. I have no words.

The closest I came to feeling any sympathy for any of the characters was when it transpired that Charlie had taken only three books on holiday with him. And one of them was by Dan Brown. The humanity.

As a literary experience, this is like reading a novel length version of one of those short stories in women’s magazines, written by someone who’s been on a creative writing course in the Lake District. Don’t get me wrong; there’s some good chick lit out there – Me Before You was a book group choice recently and it was rather good. Mike Gayle seems to have carved himself out a niche in the beach read market and good luck to him but he’s not for me.

Amazon Customer
5.0 out of 5 stars More
Reviewed in the United Kingdom on 2 October 2018
Verified Purchase
I must confess this writer is my all time favourite. I get through two or three books a week, I know , sad, !. I only have one complaint , I can read faster than he can write .
Read more
2 people found this helpful
Report abuse

Karen B
4.0 out of 5 stars A perfect holiday read
Reviewed in the United Kingdom on 5 July 2018
Verified Purchase
I read this book in a day while lying on a sunbed in Crete. It was the perfect holiday read for me. The story built up nicely with likeable characters & nothing too shocking happened. There was a beginning, a middle & an end though which is always good. It does show how lives can change when 3 friends go on holiday together.
Read more
Report abuse

Jg
4.0 out of 5 stars A Fun Read
Reviewed in the United Kingdom on 28 September 2018
Verified Purchase
Lots of funny parts and very uplifting. A really great author and I have downloaded most of Mike Gayle’s books as they are such fun and interesting to read.
Read more
One person found this helpful
Report abuse

laura rooke
3.0 out of 5 stars An easy read
Reviewed in the United Kingdom on 3 August 2020
Verified Purchase
Perfect for a holiday read. Nothing particularly exciting happens but you get to know the characters which is good. I like Mike Gayle but wouldn't say it was his best.
Read more
Report abuse
See all reviews
Get FREE delivery with Amazon Prime
Prime members enjoy FREE Delivery and exclusive access to movies, TV shows, music, Kindle e-books, Twitch Prime, and more.
> Get Started
Back to top
Get to Know Us
Make Money with Us
Let Us Help You
And don't forget:
© 1996-2020, Amazon.com, Inc. or its affiliates