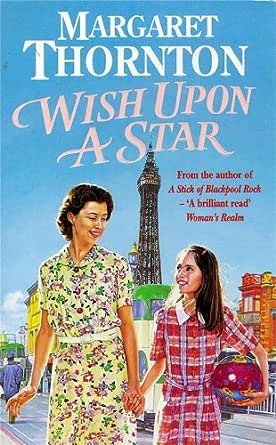 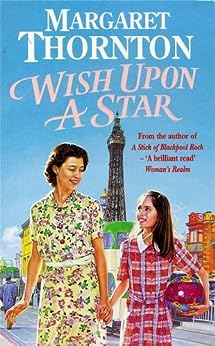 Wish Upon a Star: An utterly compelling Blackpool saga of war, love and evacuees Kindle Edition

A brilliant read * Woman's Realm * A smashing holiday read * Lancashire Evening Telegraph * [A] compulsive page turner * Coventry Evening Telegraph * A lovely book to read by the fireside on dark, long nights * Herald Express * A fine romance * Belfast Telegraph * Her fans will love it, and it deserves to make fans of new readers * West Lancashire Evening Gazette * A delightful book; full of humour and warmth against an authentic war-time Blackpool when Pablo's sold ice-cream and troops from abroad drilled on the promenade * Lancashire Mag * Exquisite * North Wales Chronicle * --This text refers to an alternate kindle_edition edition.

Margaret Thornton was born in Blackpool and has lived there all her life. She is a qualified teacher but has retired in order to concentrate on her writing. She has two children and five grandchildren. Her previous Blackpool sagas are all available from Headline and have been highly praised. --This text refers to an alternate kindle_edition edition.

4.6 out of 5 stars
4.6 out of 5
183 global ratings
How are ratings calculated?
To calculate the overall star rating and percentage breakdown by star, we don’t use a simple average. Instead, our system considers things like how recent a review is and if the reviewer bought the item on Amazon. It also analyses reviews to verify trustworthiness.

Stella Bowman
4.0 out of 5 stars A very pleasant read
Reviewed in the United Kingdom on 14 August 2020
Verified Purchase
I haven't read books by this author before - now having read at least three, I am keen to read the rest she's written. This one was such a pleasant and relaxing read which is important before one goes to sleep.
Read more
Report abuse

Maria
5.0 out of 5 stars Wonderful
Reviewed in the United Kingdom on 16 August 2017
Verified Purchase
This l assume is the sequel to :
A Stick Of Blackpool Rock
There may be another book in between these two.?.
A truly lovely book a bit tearful in places it was a shame it had to end.
But all of Margaret Thornton's Novels are a Wonderful Read.
And as l have visited Blackpool every year since 1946 and still do, these books hold a
"Special Place"
for me.
Read more
One person found this helpful
Report abuse

Elaine/ Castleford
5.0 out of 5 stars Captivating
Reviewed in the United Kingdom on 17 August 2020
Verified Purchase
A book you just can't put down. I love reading stories about family life during WW2 and this one was so wonderfully beautiful to read. It takes you on a rollercoaster of emotions from beginning to end. The characters were all so lifelike and I could see everyone of them as I read each and every exciting chapter. I've read a number of similar books during lockdown and have to say this is one of my favourites.
Read more
Report abuse

Kindle Customer
5.0 out of 5 stars Such a shame that these books are not numbered. ...
Reviewed in the United Kingdom on 3 August 2017
Verified Purchase
Such a shame that these books are not numbered. I read book 2 first and then discovered book 1. So i was all out of synch. Spoilt things somewhat. Maybe a thought to bear in mind for the future..Just a note for future readers. A stick of Blackpool Rock is book 1 then this one follows
Read more
2 people found this helpful
Report abuse
See all reviews
Back to top
Get to Know Us
Make Money with Us
Let Us Help You
And don't forget:
© 1996-2021, Amazon.com, Inc. or its affiliates