Wildflower and over 1.5 million other books are available for Amazon Kindle . Learn more
Share <Embed> 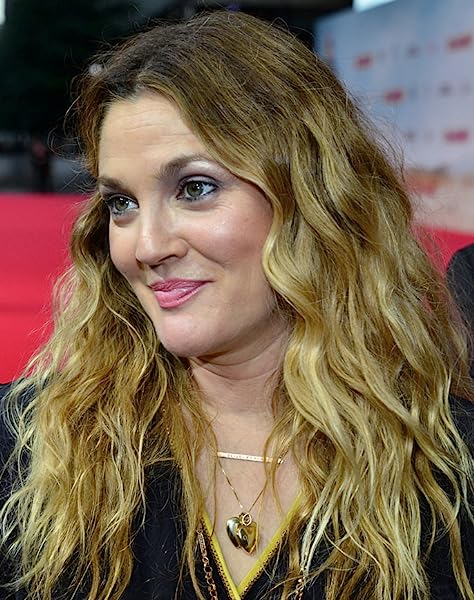 Page 1 of 1 Start overPage 1 of 1
Previous page
Next page
Start reading Wildflower on your Kindle in under a minute.

Praise for Wildflower Pure delight. . . . If until now you merely liked Barrymore . . . you'll adore her once you read this series of personal essays."--The New York Times Book Review "The book is a deeply thoughtful and fun page-turner--like a rich dessert that also happens to be good for you."--InStyle "[Barrymore] brings honesty, sweetness, and humor to the tale of how she fought to earn the hard-won wisdom that steered her from being a twelve-year-old former child star to becoming a beloved actor. . . . A warm and inviting narrative."--Publishers Weekly

Barrymore's book is a cheerful and happy examination of some of the ups and downs in her life.--Booklist

Heartwarming. Fans of the actress, her production company, makeup line, or girl-next-door demeanor, or anyone looking for a companion in book form, will enjoy.--Library Journal "An endearing, earnest, lightly cultivated garden of stories from the actress."--Kirkus Reviews

Drew Barrymore starred in E.T. at the age of six and has gone on to win critical acclaim and the hearts of fans for years in movies such as The Wedding Singer, Ever After, Charlie's Angels, and Grey Gardens, just to name a few. She is the cofounder of Flower Films, Flower Beauty, and Barrymore Wines. She lives with her family in New York and Los Angeles.

4.4 out of 5 stars
4.4 out of 5
1,058 global ratings
How are ratings calculated?
To calculate the overall star rating and percentage breakdown by star, we don’t use a simple average. Instead, our system considers things like how recent a review is and if the reviewer bought the item on Amazon. It also analyses reviews to verify trustworthiness.

rosie
5.0 out of 5 stars Compelling
Reviewed in Australia on 29 March 2017
Verified Purchase
Interesting and heart warming read.
A true child star turned great person and loving mother.
Drew shows that with passion and determination, we can turn our lives into what we want. #girlpower

Skybe
3.0 out of 5 stars Need to like Drew
Reviewed in Australia on 20 April 2016
Verified Purchase
I really like Drew in movies and was curious about her book. It is brief snap shot of short stories that have helped shape her. It is light hearted and an easy read.
Read more
Helpful
Report abuse

Amazon Customer
2.0 out of 5 stars I wouldn't recommend this book.
Reviewed in Australia on 20 March 2016
Verified Purchase
I thought it would b a funny and interesting read. It was a book anyone could have written, very ho hum and repetitive mum stories.
Read more
Helpful
Report abuse

Miss Karen Davoren
4.0 out of 5 stars Pretty good!
Reviewed in Australia on 17 June 2016
Verified Purchase
Not a bad book. But being a big Drew Barrymore fan, I might be biased. This book made me love her even more.
Read more
Helpful
Report abuse

Alpha Reader
TOP 500 REVIEWER
4.0 out of 5 stars Solidified my feelings that we would be insta-BFFs should we ever meet in real life.
Reviewed in Australia on 27 October 2016
‘Wildflower’ is the 2015 memoir by award-wining actress, by Drew Barrymore.

I’ve found myself in intermittent reading-slumps a lot this year. Sometimes they span a couple of days, or a couple of weeks but I’ve even gone on a month-long bookish drought this year, and mostly because I’m working on projects that are exciting and fun and taking up all my bookish energies! So I wanted to read a book that could be a bit of a palate-cleanser … outside of my usual scope, something I can pretty much guarantee will amuse me and be something I can put down and come back to with long lags in-between. That book has proven to be ‘Wildflower’.

I love Drew Barrymore – who doesn’t? She’s not so much the cute but troubled E.T. child to me and my generation, but I know her as the kick-butt Charlie’s Angel who told a room full of bad guys that; “By the time this is over, every one of you is going to be face-down on the floor, and I’m going to moonwalk out of here.” Or she’s Josie “Grossie” Geller from the (greatest) 1999 movie 'Never Been Kissed', standing on the pitcher’s mound waiting for her moment and man. She’s the real Cinderella in 'Ever After', who saved herself – thank you very much! Or she’s the woman tearfully introducing herself in the mirror as ‘Julia Guglia’ in 'The Wedding Singer', and discovering that true love is giving up the window seat on a plane. Basically, I know the Drew who has made a career out of playing and being the woman that everyone wants to be best friends with …

‘Wildflower’ totally leans into Drew’s infectious likability and aspirations. There’s not a whole lot in here that delves into the darker periods of her life … including being institutionalised as a preteen for drugs and alcohol abuse, emancipated at the age of 14 (and figuring out how leftovers and washing machines work), the intermittent appearances of her hippie-unstable estranged father… and probably because she’s very upfront about writing this book for her two girls to read one day, she chooses the sunshine and silver-linings over the nittier and grittier, which may be a let-down for some who would prefer to know those in’s and out’s of her life.

But for me – I loved reading about her growing up in LA (with these total Francesca Lia Block/ 'Weetzie Bat' feels!) and the trickles of information she has about her family of thespians, including "The Profile" John Barrymore … she may not lean into the darker parts of her history, but she does say that she supports and loves her mother, and it’s interesting to learn of her mother’s background – she was born in a displaced persons camp in Brannenburg, West Germany, to Hungarian World War II refugees.

When she goes into her growing up in the 90s (when she was at her most exhibitionist, seemingly wild-child) it’s kind of nice to read about the oddball family she was amassing behind-the-scenes, and people who she’s still friends with now and built a fantastic production company with;

***
That’s what we did. It was Los Angeles, and we had a lot of friends, and all of them were at the beginning of their exciting lives too. Some of the coolest filmmakers and the biggest movie stars would come hang at our house, but they hadn’t become those things yet. We were all in the incubation process and in the last carefree times of our lives. We were human Polaroids slowly developing into what other people would see, but for now we were just scrappy kids in no rush to grow up.
***

I will admit that this memoir isn’t overly groundbreaking, and it’s probably of such little interest to anyone who isn’t a total Drew fan (duh!) … probably a lot of the book’s appeal is just getting to see behind the Hollywood curtain, and discovering that Drew Barrymore is exactly as fictional best-friend worthy as you’d always expected. My favourite chapter is her delving into post-'Charlie’s Angels' media tour, when she, Lucy Lu and Cameron Diaz were roped into doing a 3-day survival course as part of the publicity trail. Drew (who was also the film’s producer, and weighed down by stress ahead of release) was not the out-doorsy, go-get-em’ type duing the trip, thereby making her my patronus … And she’s just plain funny. Of course she is – humour is her forte, and it’s a total kick to see that she’s just as clumsy and sarcastic and hilarious in real-life as she is on screen;

***
“OK, now your turn Cameron!” A born athlete from Long Beach, California, she made her way down like the girl we all know and love. Cool, funny, capable. Everyone roared with delight.
Then came a halfhearted to me “OK, now your turn” – no name, just “c’mon, let’s get this over with and get the unfun one down the rock.” And so I did. And while I was clinging for dear life, my foot slipped and I fell a good ten feet, and then I snapped with a hard jerk as my tether caught, and I was just swinging in midair, back and forth like a stupid metronome in unflattering khakis.
***

This wasn’t a groundbreaking, all-time-favourite read … and there’s a little tinge of sadness to some chapters on her family, given that she and Will Kopelman announced their split this year … but if nothing else, ‘Wildflower’ is a celebration of how many times Drew Barrymore has picked herself up, dusted herself off, learnt to enjoy her own company and keep on keeping on. It was cathartic and enjoyable, and made me want to pull out all my Drew Barrymore DVDs for a binge-watch… and solidified my feelings that we would be insta-BFFs should we ever meet in real life. So, there’s that.

Ruby Red
3.0 out of 5 stars Missing something for me
Reviewed in the United Kingdom on 18 August 2019
Verified Purchase
One of the most interesting women shares snippets of her life, which seem to me a starting point but nothing more. I was hoping for more insight into what drives this interesting character, who seems to have so many unique stories to tell. This richness must have informed her choices and her individuality but, for me, not this book. Rather, this is just a start down that lane - a jumbled mix of various short episodes, peppered with tributes to her daughters, which seemed out of place and, frankly, little self-indulgent. I wanted to love it and to be inspired. Not this time.
Read more
2 people found this helpful
Report abuse

Mia Johal
2.0 out of 5 stars Superficial
Reviewed in the United Kingdom on 22 December 2020
Verified Purchase
I have always been a fan of Drew Barrymore and since she is always quite open about her life, I thought this would be an insightful view into her early life and how she overcame addiction, toxic relationships with her family. For me that could have been an extremely inspirational book for others to draw from. However each chapter is a different "story" which skims over her life and it's very superficial. A couple of the stories are interesting, which is why I gave it two stars, but it's not one to stay on my bookshelf!
Read more
Report abuse

Vikquar
2.0 out of 5 stars Disappointed
Reviewed in the United Kingdom on 29 March 2021
Verified Purchase
It has a couple of funny abd interesting stories about events in her life but the rest is just about all the people in her life that she loves. It's not worth reading I'm very disappointed
Read more
Report abuse

Linda
5.0 out of 5 stars Very inspirational
Reviewed in the United Kingdom on 4 April 2019
Verified Purchase
What a fantastic and beautiful book. Very inspirational and made me fall even more in love with Drew Barrymore. She has a beautiful philosophy on life that I will begin to adapt.
Read more
One person found this helpful
Report abuse

Amazon Customer
2.0 out of 5 stars Black and white
Reviewed in the United Kingdom on 1 January 2021
Verified Purchase
The pictures in the paperback are really poor quality and in black and white. Not read the book yet but wasnt impressed by this!
Read more
Report abuse
See all reviews
Back to top
Get to Know Us
Make Money with Us
Let Us Help You
And don't forget:
© 1996-2021, Amazon.com, Inc. or its affiliates