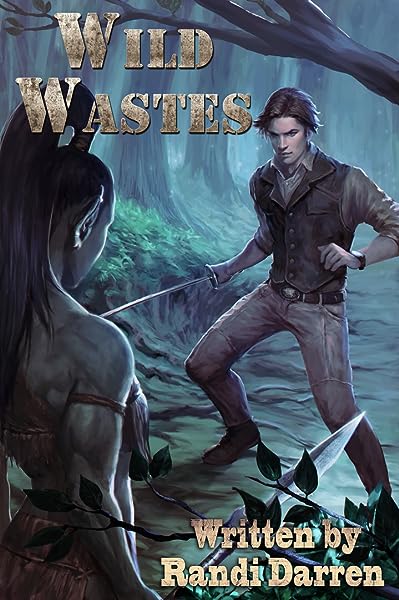 Page 1 of 1 Start overPage 1 of 1
Previous page
Next page
Start reading Wild Wastes on your Kindle in under a minute.

4.5 out of 5 stars
4.5 out of 5
334 global ratings
How are ratings calculated?
To calculate the overall star rating and percentage breakdown by star, we don’t use a simple average. Instead, our system considers things like how recent a review is and if the reviewer bought the item on Amazon. It also analyses reviews to verify trustworthiness.

Amazon Customer
1.0 out of 5 stars Avoid.
Reviewed in Australia on 24 May 2017
Verified Purchase
Awful, awful, awful! Was this written by a 14 year old boy? because that's about the reading level it appears to be aimed at.
Read more
One person found this helpful
Helpful
Report abuse

Amazon Customer
5.0 out of 5 stars 10/10
Reviewed in Australia on 28 May 2017
Verified Purchase
This book is fantastic, and I hear tell that a new one is being written. I can't wait to read it!
Read more
Helpful
Report abuse

Amazon Customer
5.0 out of 5 stars 5 stars
Reviewed in Australia on 22 March 2017
Great read. I enjoyed all of it. Good action and nothing that veers off on an unknown tangent. This is does have plenty of adult content so beware if your not into that. I enjoyed it tho. Next book please Randi
Read more
Helpful
Report abuse

Kindle Customer
5.0 out of 5 stars Interesting
Reviewed in Australia on 5 November 2018
An interesting start to a series that looks very much like a page turner that you can't put down. Looking forward to the next installment.
Read more
Helpful
Report abuse
See all reviews

Iwan smith
1.0 out of 5 stars Terrible Worldbuilding
Reviewed in the United Kingdom on 28 November 2018
Verified Purchase
Well.... this wasn't a very good book.

According to the description this is supposed to be a post-apocalyptic story where an apocalypse during WW2 causes fantasy creatures to appear.
However when you read though the story the post-apocalyptic elements of the story are so under-utilised that it might as well take place in an original fantasy setting. Guns are hand-waved away with "bullets are too expensive," apparently in 100 years no one has figured out how to make bullets. A Ballistae with gears and levers is labelled as ingenious despite it taking place in a setting were people used to make guns, tanks and planes.
Apparently humanity is content with sticking with medieval weapons supplemented with an ageing stock of guns (also with declining ammo reserves) despite living next to a hostile wasteland.

There is no references to the america that was. I'm not asking for a comprehensive guide to how culture evolved after the apocalypse but wouldn't there be some connection to the past? This goes back to the point that this might as well be a generic fantasy story

Now the worldbuilding is out of the way.
There is just no tension to this story. After a while I realised that our main character is one of those characters that manages to succeed in everything that he does. There are no complications to his plans. And everyone (who is not a villan) loves him.
Two words for that.... Gary Stu.

Lets give an example where there is no tension.
Near the end of the book Vince decides to build a kingdom with freed slaves. However it turns out that there is a human army coming to destroy his fledgling kingdom. So this should be a tense moment right?
However as the battle unfurls, it becomes clear that all the odds are heavily stacked in Vince's flavor. This settlement has walls, towers with siege equipment built into them, (all this in place within only two months) all his militia are armed and armoured to the teeth combined with the army scale spells that the main character flings out thanks to the magic tree's implanted in him sucks all the tension out. Even with one of the harem members getting critically injured in battle did nothing to raise the stakes (she gets healed in the same scene anyway).

It doesn't help that there are neither any villains to generate conflict nor are there any obstacles for him to overcome.

Of course the sex is.... well.... its passable. Although the big sex scene before the big fight near the end of the book is extremely drawn out with Vince having sex with his harem one at a time and using his psychic abilities to spread his feelings around.

Don't bother getting this. This reads like one of those bad japanese isekai Web-novels.
Read more
4 people found this helpful
Report abuse

Mr. A. Marczylo
4.0 out of 5 stars Surprisingly good
Reviewed in the United Kingdom on 26 May 2019
Verified Purchase
I was initially uncertain what I was in for. I've been interested in getting into the erotica scene recently and I was curious what was out there, what was good, what was bad. What's incredibly common and what's rare with the potential of a large audience.

The only nit-picks are have are these:

1. I highly doubt no one would be able to obtain firearms anymore. Especially in america where there would be thousands of manufacturing tools for such things available. Hell, look at post-apocalyptic situations like Fallout, Mad Max and others and they have discovered the ways to rebuild ammo.

If you're after a Harem story to read, I highly recommend this one. None of the others I've read so far have compared if you want something that simulates your mind as well as your nether regions.
Read more
Report abuse

Mr Ian P Birchenough
4.0 out of 5 stars An excellent Adult fantasy
Reviewed in the United Kingdom on 10 March 2018
Verified Purchase
Set in a future America blighted by an accident that has turned huge tracts of the country magical and inhospitable to humans this story follows the adventures of a ranger in the wastes as he opposes the powerful slavers guild, traitors in his own guild and hostile kings from neighbouring kingdoms, alongside his growing number of wives. Secretly non human himself, he finds himself unexpectedly acquiring a variety of wives as he creates a slavery free city where they can be safe and flourish.
Read more
2 people found this helpful
Report abuse

James Patterson
5.0 out of 5 stars Well written, interesting premise
Reviewed in the United Kingdom on 17 April 2017
Verified Purchase
Interesting idea that combines the concept of a post-apocalypse with fantasy creatures, adventuring and settlement building. Enjoyed it immensely with enough new ideas to make it stand out from other books I have read recently. Even the higher than normal level of sex scenes make sense given the storyline and cultural fit - I'd prefer fewer if the author is reading ;) it was good enough to read it in kindle unlimited and then buy.
Read more
5 people found this helpful
Report abuse

Kindle Customer
4.0 out of 5 stars Weird and wonderful
Reviewed in the United Kingdom on 27 May 2017
Verified Purchase
Well what can I say,it's a strange book but funny and serious at the same time. Similar to some anime I've watched. Enjoyed and the strange relationships but in the 'wastes' I think it's normal. Recommend it for light readers who's into quirky books.
Read more
2 people found this helpful
Report abuse
See all reviews
Back to top
Get to Know Us
Make Money with Us
Let Us Help You
And don't forget:
© 1996-2021, Amazon.com, Inc. or its affiliates