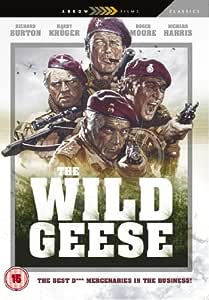 Secure transaction
Your transaction is secure
We work hard to protect your security and privacy. Our payment security system encrypts your information during transmission. We don’t share your credit card details with third-party sellers, and we don’t sell your information to others. Learn more
Details
Ships from
Rarewaves UK
Sold by
Rarewaves UK
New (6) from
$12.04 + $3.00 Delivery

4.7 out of 5 stars
4.7 out of 5
910 global ratings
How are ratings calculated?
To calculate the overall star rating and percentage breakdown by star, we don’t use a simple average. Instead, our system considers things like how recent a review is and if the reviewer bought the item on Amazon. It also analyses reviews to verify trustworthiness.

BM2662
5.0 out of 5 stars Super action movie
Reviewed in the United Kingdom on 30 March 2018
Verified Purchase
Richard Burton made a trio of movies one after the other late in his career.
The Medusa Touch, Equus and the wild geese are all outstanding.
Maybe the wild geese is the best of the trio.
The blu Ray transfer is excellent with natural colours and accurate lighting.
The plot is well known and contains an assortment of stereotypes that can may you cringe at times.
Thankfully the sum of the movie is better than its parts and everything fits together beautifully.
The political correct brigade will probably be horrified by the movie. That's only to expected when people take movies like this too seriously and don't like having fun.
The wild geese has a great cast of aging legends and household names from a bygone age.
That only increases one pleasure when watching an essential action movie such as the wild geese

rob stirling
5.0 out of 5 stars Maybe cringe worthy today but who cares.
Reviewed in the United Kingdom on 20 December 2018
Verified Purchase
Action by the shed load, plus a bit of political intrigue, plus superb stereotype roles for Burton, Harris, Moore and Kruger in the lead roles, plus a host of British bit part character actors in the support roles.
Some would balk at some very un-pc stuff in the film but I for one just love, nay drool, over this kind of free flowing entertainment, like 'Where Eagles Dare', 'The Guns Of Navarone', 'Cross Of Iron'............
One complaint----- no English subtitles, but the film is so profoundly a 1970's epoch I can't steal a star away. And, to be sure, made in the days when you could recognize actors who didn't wear camouflage make-up and steel helmets in war films to obscure their identities ('Black Hawk Down' --- how many well known 'faces' did I miss in that?).
The geek in me offers you this ----- the sons of two iconic greats have minor appearances as 'wild geese' : David Ladd and Glyn Baker, whose dads were Alan and Stanley and were no strangers to appearing in the odd classic themselves.
Read more
9 people found this helpful
Report abuse

Mark
5.0 out of 5 stars A real gem.
Reviewed in the United Kingdom on 1 May 2017
Verified Purchase
Great mercenary action movie with a superb cast (not sure how successful it was back in the day but it should have been a blockbuster)....never tire of watching it and happy to have a blu ray version in my collection,they don't make movies like this anymore.
Read more
15 people found this helpful
Report abuse

Neil Argue
4.0 out of 5 stars Great film, great transfer but don't bother with the director's commentary...
Reviewed in the United Kingdom on 14 September 2017
Verified Purchase
The film is excellent as always and the print is crisp and clear. Be warned though, the commentary from Euan Lloyd is terrible. He blathers on and on about getting the rights to the film and even the flight down, with no regard to what is happening on screen. Roger Moore occasionally interjects with the odd trivia gem or story but mostly the director just waffles on and on. I say waffles but he actually sounds like he is reading.

I know commentaries are not to everyone's liking but this one is a real shame, considering the actors in it. It could have been fascinating.
Read more
10 people found this helpful
Report abuse