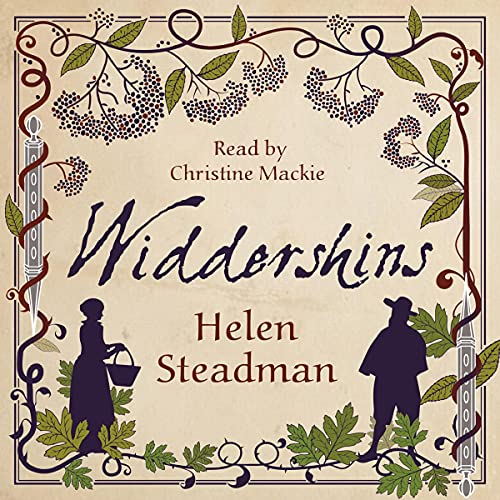 Helen Steadman (Author, Publisher), Christine Mackie (Narrator)
4.3 out of 5 stars 83 ratings
See all formats and editions
Sorry, there was a problem loading this page. Try again.

Widdershins is inspired by the Newcastle witch trials, where 16 people were hanged. Despite being the largest mass execution of witches on a single day in England, these trials are not widely known about. In August 1650, 15 women and one man were hanged as witches after a Scottish witchfinder found them guilty of consorting with the devil. This notorious man was hired by the Puritan authorities in response to a petition from the Newcastle townsfolk who wanted to be rid of their witches.

Widdershins is told through the eyes of Jane Chandler, a young woman accused of witchcraft, and John Sharpe, the witchfinder who condemns her to death. Jane Chandler is an apprentice healer. From childhood, she and her mother have used herbs to cure the sick. But Jane soon learns that her sheltered life in a small village is not safe from the troubles of the wider world. From his father’s beatings to his uncle’s raging sermons, John Sharpe is beset by bad fortune. Fighting through personal tragedy, he finds his purpose: to become a witchfinder and save innocents from the scourge of witchcraft.

The Historical Novel Society said of Widdershins: “Impeccably written, full of herbal lore and the clash of ignorance and prejudice against common sense, as well as the abounding beauty of nature, it made for a great read. There are plenty of books, both fact and fiction, available about the witch-trial era, but not only did I not know about such trials in Newcastle, I have not read a novel that so painstakingly and vividly evokes both the fear and joy of living at that time.”

4.3 out of 5 stars
4.3 out of 5
83 global ratings
How are ratings calculated?
To calculate the overall star rating and percentage breakdown by star, we don’t use a simple average. Instead, our system considers things like how recent a review is and if the reviewer bought the item on Amazon. It also analyses reviews to verify trustworthiness.

Ted Curtis
5.0 out of 5 stars In the witchfinder John Sharpe, Steadman has given us a religious psychopath par excellence ...
Reviewed in the United Kingdom on 7 July 2017
Verified Purchase
Picture it, if you will, sir: two childhoods both brutal and idyllic, the rural English Northeast and the south of Scotland in in the Seventeenth Century. The civil war an afterthought, the routine tragedies of the daily grind are detailed and laid bare. The misogyny of the accursed Christian church is given full reign with the coming puritan insurgency that would seek to ban Christmas, folk dancing, and many other things: really, what would possibly go wrong?

But enough of the silly voices. Based on fact and extensively researched, Widdershins takes us on a rollercoaster ride through the childhoods of Jane Chandler and John Sharpe in County Durham and Scotland respectively, as they hurtle through the ether toward one another on an inevitable collision course. Something must break, as they say. And break it does, in the horrifyingly climactic Newcastle witch trials of 1650, in which either fifteen or sixteen innocents were hanged until dead on a single day.

In the witchfinder John Sharpe, Steadman has given us a religious psychopath par excellence, a deeply conflicted man for whom cognitive dissonance could have been invented, filled to overflowing with impotent rage for his immaculately damaged childhood, somehow unaware of this in the days before Freud and yet aware of it too. He knows he’s a fraud, yet believes himself to be doing God’s work; and so he soldiers on, his paltry excuse for a conscience clear. Had he been born today, he’d likely be a flight to Turkey, en route for Syria: plus ça change. Jane is his polar opposite, almost a romantic heroine, but in a good way: her wealth of misfortunate experience neither warps nor breaks her, and although she adapts to the slings and arrows life throws at her in a pragmatic manner, she remains true to the end.

I am not usually much of a one for historical fiction, unless it’s about England in the 1970s – but Widdershins had me on a knife edge throughout. It’s expertly plotted and immaculately paced, with more twists and turns than Fat Larry’s pants. The characters are by turns engaging and enraging, and the whole thing really puts you there, in time and place; it’s impossible not to get emotionally caught up and then put through the wringer by the fate of the victims of these show trials, effectively the end result of the clergy subjecting themselves to such unnatural practices as celibacy, which inevitably led to a mass gynophobia, passed onto the gen pop through the medium of fiery sermons. This really is an amazing first novel, astounding and outstanding. Five stars.
Read more
14 people found this helpful
Report abuse

Mkko
5.0 out of 5 stars Cruel and compelling.
Reviewed in the United Kingdom on 6 December 2019
Verified Purchase
This is a definite page turner and one I’ve read twice. I don’t think I gave it my full attention during summer but reading it on these dark nights really brought this tale to life. John Sharpe is a character that will stay with me and not for good reason. He’s utterly repugnant. His childhood really makes the monster he becomes. That said I can honestly say it’s rare a book makes me feel rage like this one did. Set in that awful period when so many innocent folk found themselves accused of witchcraft this is a book that drags you along with the poor accused.
Read more
2 people found this helpful
Report abuse

Fin C Gray
5.0 out of 5 stars A Dire piece of our history brought vibrantly to life
Reviewed in the United Kingdom on 31 October 2017
Verified Purchase
Widdershins is a hard novel to forget. The characters are so real you can picture them beside you and their fates are as important to you as if you knew them personally. Some to love and some to hate but none you will feel indifferent to. The language is rich and sounds authentic and the story is told unapologetically with no holds barred. This was a book I didn’t want to end and very hard to put down. Helen Steadman knows her subject inside out and gives great insight into a period of history that we should feel ashamed of. Two very different narrators bring us careering towards the horrifying denouement that you almost want to shield your eyes from. I look forward to reading more from this author who brings an authentic accessibility to historical fiction. Nothing less than five stars for Widdershins.
Read more
2 people found this helpful
Report abuse

Kaylie
5.0 out of 5 stars Fabulous
Reviewed in the United Kingdom on 12 November 2021
Verified Purchase
I loved this audiobook, so much so that I actually brought the ebooks straight away!

Jane Chandler was a great character who I was behind throughout the story.

The fact that this was based on a lesser known part of history had me googling into the night as I was fascinated.

If like me you love a historical fiction that drips in reality and is interesting this one is definitely for you!

Thank you to Love Books Tours and the author for the opportunity to read/listen to this.
Read more
Report abuse

Marion
5.0 out of 5 stars Brilliant
Reviewed in the United Kingdom on 9 July 2017
Verified Purchase
What a brilliant read. As a born and bred Consett lass the local references were entertaining but the knowledge of nature and its bounties and how they were used historically I found truly facinating. Can't wait to read more from this author in the hope that she will regail us with more of her vast local and witchery knowledge.
Read more
6 people found this helpful
Report abuse
See all reviews
Back to top
Get to Know Us
Make Money with Us
Let Us Help You
And don't forget:
© 1996-2021, Amazon.com, Inc. or its affiliates