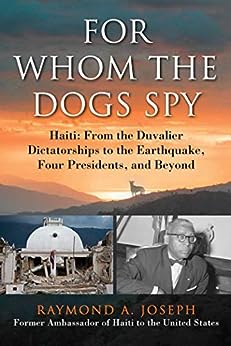 For Whom the Dogs Spy: Haiti: From the Duvalier Dictatorships to the Earthquake, Four Presidents, and Beyond Kindle Edition

“For Whom the Dogs Spy is an excellent account of the modern political history of one of America’s closest neighbors by someone who has lived through it . . . . a volume that . . . has great merit, illuminating a country that, for many Americans, remains too much in the shadows.”
—Wall Street Journal

"[An] engrossing memoir of a former [reporter] who ran the best sourced radio program about Haiti during the 60s, mercilessly skewering the evil Papa Doc to distraction."
—Miami Herald

“This book is a great piece of history that will help the world to understand [Haitians] better. The truth will prevail. I wish my uncle had put this book out when I was a Fugee. I could have begun the song, ‘Ready or not, here I come. For whom the dogs spy, I keep a watch with my third eye.’ I’ve been told that the apple doesn’t fall far from the tree. After reading my uncle’s book, I feel just like I was an apple and he was my Big Tree.”
—Wyclef Jean

"For Whom the Dogs Spy follows the arc of [Raymond Joseph's] career in pugilistic detail while tracing Haiti’s history from the 1950s to the present."
—New York Observer

“No doubt the struggle for democracy in Haiti has many heroes, but surely [Raymond Joseph] stands in the top rank. He out-maneuvered a death sentence handed down by the Duvalier regime to play a leading role in the struggle for freedom in a nation founded in one of history's most important slave revolts. All who root for the success of democracy in Haiti —and beyond— will want to read Ambassador Joseph’s memoir.”
—Seth Lipsky, editor of the New York Sun

“Ray Joseph is the voice and conscience of Haiti. Eighty-two now, he’s written a book about his life, and about the tragedy that befell Haiti. Nobody can tell the story better than Ray Joseph.”
—Stanley Penn, Pulitzer Prize winner

“Ray Joseph, among the most distinguished Haitians of recent generations, has given us a compelling memoir that is also a penetrating modern history. Presidents Duvalier, Aristide, Martelly, voodoo, cruelty, carnivals, corruption, and the environmental degradation of Haiti—all are laid bare on these pages. Ray Joseph has been a crusader for Haitian democracy for more than 50 fifty years and has greatly influenced this history that he so skillfully tells.”
—Peter Kann, former chairman and CEO of Dow Jones & Co. --This text refers to an alternate kindle_edition edition.

Raymond A. Joseph was a reporter at the Wall Street Journal for fourteen years. He has worked in international affairs for decades, serving as both the Haitian chargé d’affaires and ambassador. He has collaborated closely with major political figures including Ronald Reagan, Rudy Giuliani, the Bushes, and the Obama administration. Joseph lives in New York. --This text refers to an alternate kindle_edition edition.

4.1 out of 5 stars
4.1 out of 5
26 global ratings
How are ratings calculated?
To calculate the overall star rating and percentage breakdown by star, we don’t use a simple average. Instead, our system considers things like how recent a review is and if the reviewer bought the item on Amazon. It also analyses reviews to verify trustworthiness.

thomas andrew
3.0 out of 5 stars A good book that seems like three books in one
Reviewed in the United States on 28 July 2015
Verified Purchase
A good book that seems like three books in one. In the beginning it came across as a brag sheet for the author, then became a very opinionated and vibrant action story and finally a concise historical narrative about the current politics in Haiti. At times it seemed like different authors were behind the sections. The middle section was the most enjoyable to read. The depth of personal knowledge and first hand experience were the strengths of this good book. I expected more on the history of Haiti, and even the abdication of Baby Doc seemed too brief in explanation. The title of the book is misleading, as there is very little in this volume about the earthquake - just a few sentences at the end. All in all a good book by a self reported great man who no doubt adds much to the literature about this deeply troubled island. I will seek out a book with more on the history.
Read more
One person found this helpful
Report abuse

Wishwasbiking
3.0 out of 5 stars Interesting but limited.
Reviewed in the United States on 14 December 2016
Verified Purchase
The book provides an insiders view of the political development of Haiti from the Duvalier up to more recent times. It fills gaps that are left by occasional news reports and provides context for assessing those reports.

The book suffers somewhat from the intimacy of the author to the events he describes. Sometimes, the work is more of a personal reflection or recollection than a broader accounting.

These are some amazing antidotes in the book that could only be provides by a person who has served in the diplomatic corps for decades and has a insider's understanding of the UN and other institutions.
Read more
Report abuse

Alexander Gonaive
5.0 out of 5 stars A masterpiece of the Haitian saga
Reviewed in the United States on 21 March 2015
Verified Purchase
Great book written by a person who lived the life of what he's writing about. I would recommend it, especially for those Haitians, who, like me, left the country years ago ( mid 60's for me, and only 9 years old), but have a loving nostalgia for it . Mr Joseph is a talented writer who'll inform you, make you laugh a lot with those creole gems he drops in the book from time to time. Haitians who know some creole know what I'm talking about, but even if you don't, you'll still LOL. At the same time, a very serious book that delves into the sad political and historical intrigue that has plagued the country from its birth to the present day. lastly, The writer, love him, hate him, the man is a true nationalist who makes you feel proud of Haitian birth and gives you solid reason for it too. I highly recommend it.
Read more
One person found this helpful
Report abuse

Arthur Mortensen
5.0 out of 5 stars Joseph's Account is One to Pay Attention To
Reviewed in the United States on 13 February 2015
Verified Purchase
Interesting book about a subject we should pay closer attention to. Episodic of necessity (Joseph has been involved in Haiti's national history for half a century), it will surprise most American readers and might be a revelation to many of our leaders.
Read more
2 people found this helpful
Report abuse
See all reviews
Back to top
Get to Know Us
Make Money with Us
Let Us Help You
And don't forget:
© 1996-2021, Amazon.com, Inc. or its affiliates