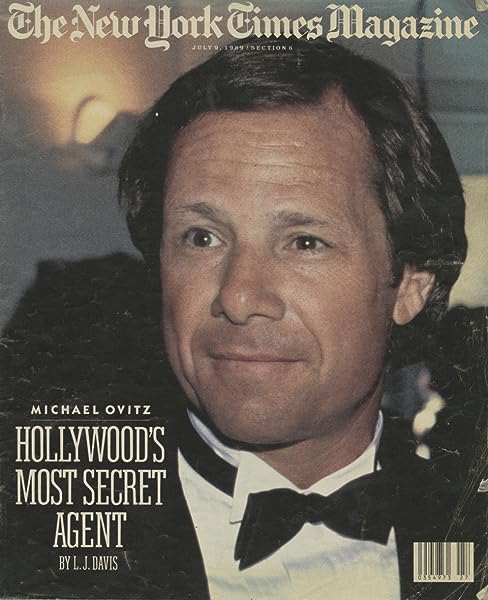 Who is Michael Ovitz?: Reflections on Hollywood and Beyond Hardcover – 15 September 2018

by Michael Ovitz (Author)
4.6 out of 5 stars 170 ratings
See all formats and editions
Sorry, there was a problem loading this page. Try again.

Excerpted from WHO IS MICHAEL OVITZ?

When the history of Hollywood is written, few people will have played a larger role than Michael Ovitz.... It is impossible to read such a chronicle and not see Mr. Ovitz as the Steve Jobs of agenting, possessing a version of Jobs's fanatical drive and a similar desire to remake an industry. --The Wall Street Journal A revealing retelling of his Hollywood career.... A study in the unusual personality traits required to pull this off, Who Is Michael Ovitz? represents a master class of sorts. --The New York Times Learn how to build an empire and transform an industry from the Jedi master of modern Hollywood. --Marc Andreessen

This is one of the best books I've ever read. The meticulous detailing is as graphic and captivating as Michael's Jasper Johns 'White Flag' painting. The stories are vivid, educational, entertaining, and deeply satisfying. --LA Reid Who Is Michael Ovitz? is an unexpectedly good read....What makes [it] juicier than the average business memoir is that the author proves surprisingly willing to dish about the foibles of former clients and colleagues alike. --Michael Cieply, Deadline: Hollywood Michael is a legend and I don't use that term lightly. Learning from his journey is something that every entrepreneur and executive should do. --Gary Vaynerchuk Michael's brilliance and relentless drive clearly shine through in this entertaining memoir. You see the man behind the agency and how he built a global business empire. His life story has powerful lessons for us all. --Roger Goodell, NFL Commissioner It is truly rare to read a book this honest from a living legend. The Hollywood superhero lets us peak behind his mask and understand his weaknesses and methods.... I was shocked, thrilled, and surprisingly educated. A masterpiece of a memoir.--Ben Horowitz, co-founder and general partner, Andreessen Horowitz

If you're going to read one book about Hollywood, this is the one.

Michael Ovitz co-founded CAA in 1975 and served as its chairman until 1995. For most of the past two decades he has been a private investor and an advisor to Silicon Valley entrepreneurs. This is his first book.
Read more
Start reading Who Is Michael Ovitz? on your Kindle in under a minute.

Michael Ovitz co-founded CAA in 1975 and served as its chairman until 1995. For most of the past two decades he has been a private investor and an advisor to Silicon Valley entrepreneurs.

4.6 out of 5 stars
4.6 out of 5
170 global ratings
How are ratings calculated?
To calculate the overall star rating and percentage breakdown by star, we don’t use a simple average. Instead, our system considers things like how recent a review is and if the reviewer bought the item on Amazon. It also analyses reviews to verify trustworthiness.

MJW
5.0 out of 5 stars If you like hollywood business stories you'll love this. A great read!
Reviewed in Australia on 23 October 2018
Verified Purchase
Ovitz is a powerhouse. He may come across as crass, self absorbed, and greedy but he's also fascinating. He proves that old saying...progress relies on the unreasonable man (?).
Anyway I loved every page of this book . Well done Mike!

Z. Jones
4.0 out of 5 stars Interesting insight
Reviewed in the United Kingdom on 24 June 2019
Verified Purchase
This was an extremely interesting insight into the world of the "Super Agent" and I enjoyed the brutally honest tone adopted by Ovitz throughout. That said, I would like to see a version of the same events from some of his many foes!
Read more
One person found this helpful
Report abuse

Kindle Customer
5.0 out of 5 stars Fantastic!
Reviewed in the United Kingdom on 7 January 2020
Verified Purchase
Great read for anyone interested in Hollywood and the Entertainment industry or business in general. Having been someone that has inspired me for years it was good to hear about the man that shaped Entertainment in his own words.
Read more
Report abuse

patricia oliver
2.0 out of 5 stars Disappointing
Reviewed in the United Kingdom on 24 December 2018
Verified Purchase
Got this book for my husband who was quite disappointed.
Read more
Report abuse

JUSTIN V SPRATT
4.0 out of 5 stars edifying
Reviewed in the United Kingdom on 13 November 2018
Verified Purchase
I was hoping for a more gripping read, but if you want a story history on Hollywood and quickfire lessons in dealmaking, then this is well with a read. I read it in three sittings, so it was clearly gripping enough!
Read more
One person found this helpful
Report abuse

Luís Reis
5.0 out of 5 stars Dreams are so very important
Reviewed in the United Kingdom on 6 November 2018
Verified Purchase
Even when you grow up, keep dreaming
Read more
One person found this helpful
Report abuse
See all reviews
Back to top
Get to Know Us
Make Money with Us
Let Us Help You
And don't forget:
© 1996-2021, Amazon.com, Inc. or its affiliates