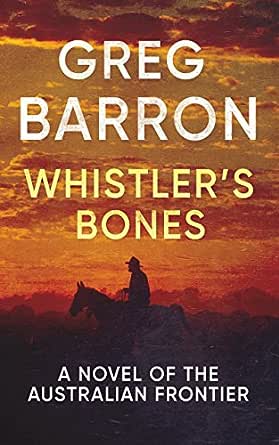 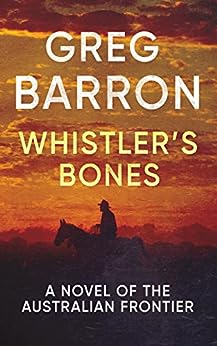 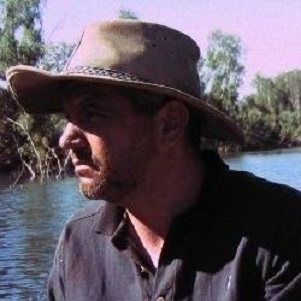 Whistler's Bones: A Novel of the Australian Frontier Kindle Edition

4.4 out of 5 stars
4.4 out of 5
144 global ratings
How are ratings calculated?
To calculate the overall star rating and percentage breakdown by star, we don’t use a simple average. Instead, our system considers things like how recent a review is and if the reviewer bought the item on Amazon. It also analyses reviews to verify trustworthiness.

Lily Malone
TOP 500 REVIEWER
5.0 out of 5 stars Brilliant! Wrenching. Amazing.
Reviewed in Australia on 25 July 2018
Verified Purchase
Greg Barron, I take my hat off to you. I thought this was brilliant.
Whistler's Bones is a fascinating story based on the life of drover Charlie Gaunt who was one of the trial-blazing horsemen and drovers of the 1880s driving cattle across Australia into the Northern Territory to establish the vast pastoral stations of central and northern Australia.
Boy, this is a wrenching tale. Through the eyes of Charlie, it is a no-holds barred view of 'white man' life and attitudes at the time. With more than 100 years of hindsight, the attitude of those drovers and cattle barons when it came to conquering the land as well as the native Australians - some of whom increasingly opposed them - but others who assisted them, makes for compelling and confronting reading.
Charlie has all the flaws of a young man who feels immortal. What starts out as an innocence is stripped from him within years of his setting off for adventure on a horse called Constance, and Charlie does terrible things for his bosses, and out of loyalty to his colleagues, for love, and sometimes simply to survive in an unforgiving land, and his actions both shape, drive and haunt him the rest of his days.
The bulk of the story narrates a two-year cattle drive across Australia with the Durack family, and recounts the many trials of the period - malaria for the men, sickness of cattle, loneliness, stampedes, starvation, drought, and as the drove moves into its second year, more and more increasingly hostile encounters between the 'invading' cattle, horses and stockmen and the various indigenous tribes of the Northern Territory and Queensland.
Yet there is a love story at the centre of the tale too. The innocent Charlie who starts this story and for whom a great pleasure is to drink a glass of 'Creaming Soda' in a pub... is not the Charlie who becomes bitter and jealous, restless and resentful when the love of his life leaves him.
I found Charlie's loss of this innocence terribly sad. Although of course, that's life.
The descriptions of the Australian outback are breathtaking. I have travelled some of the north of the country in 1999, in a 4WD and on reasonable roads, not horseback. I've been to Lawn Hill Station and Borroloola, and I remember vividly the vast and ancient sense of the land. It was wonderful to revisit that space, colour, scent and memory of Australia in these pages.
I don't know why I don't expand my reading with more early Australian history - I really do enjoy these factual stories entwined in fiction, and I might make it a goal to read more in this time period.
Bravo, Greg Barron. Your writing is amazing.

Jennifer McLeod
5.0 out of 5 stars Uniquely told and historically significant
Reviewed in Australia on 3 April 2019
Verified Purchase
A unique perspective of early life in Australia, set in the harsh outback and detailing (with a fascinating blend of fact and fiction) an important part of history, based on the life of Charlie Gaunt, an accidental drover and trail-blazer in the 1880s. This tale is about driving cattle across Australia into the Northern Territory where the vast pastoral stations of central and northern Australia were established.
Read more
One person found this helpful
Helpful
Report abuse

The story of Gaunt, a real-life historical figure, represents a largely untapped vein although many of the people wrapped around that vein, including the Duracks and Nat Buchanan, are better known. As a young teen, Charlie Gaunt leaves his family and life in 1880s Bendigo to find what sort of life he can make for himself armed with little more than some potential as a horseman. Thus begins the story that takes him across Australia, and across the world.

The strength of this novel for me, aside from the enthralling story telling, lay with the unfiltered retelling of Gaunt's story. Although an interesting and intriguing character, he is abundantly flawed. Some of his actions are indefensible and deplorable. In Gaunt, Whistler's Bones delivers a boy-to-man character we can at times admire, at times sympathise with and at times despise.

The author's decision to focus primarily on Gaunt's early manhood, and retell the rest of his story in brief, underpins the fondest memories and greatest regrets that would stay with Gaunt for life. In resisting the temptation to lionise Gaunt and turn him into a champion of causes and rights that exist now but didn't then, Barron provides a near-as-possible to accurate rendering of the man and his times. And while I'm sure the author is uncomfortable with the terms used and attitudes towards aboriginal Australians at the time, they are present in the book in unvarnished detail because to modify them would be revisionism.

Having grown up in Goulburn and being educated at St Pat's, the story of the Durack family and their epic cattle drive across to the Kimberleys was known to me, but I have to admit not in such detail or breadth. Whistler's Bones is a worthy addition to Australian literature and is deserving of being included in Australian school curricula where Gaunt's choices, the treatment of indigenous Australians and frontier life in Australian would provoke informative discussions and perhaps a desire to read more of this era and better understand it. This painstakingly researched book has certainly sent me in that direction.

I've read a number of Greg's books, but enjoyed this the most. Barron is a fine author at the peak of his powers telling stories he is passionate about. Five stars.
Read more
3 people found this helpful
Helpful
Report abuse

Papa Inura
4.0 out of 5 stars Interesting view of early Australian Outback/droving History.
Reviewed in Australia on 21 September 2019
Verified Purchase
I found the book disturbing, especially to the treatment of the Native Australian!
The story is written in a manner that is quite open and does not avoid the ugliness of Australian history!
Would recommend it to be read by all Australians!!
Read more
One person found this helpful
Helpful
Report abuse

Ken Davis
5.0 out of 5 stars Dinkum Aussie Tale
Reviewed in Australia on 9 May 2018
Verified Purchase
Great read. This book is co er to cover with real Aussie people that worked their arses off to open up the outback and spread the population across the nation. It talks of the treatment of the indigenous peoples and their ways and how they fought back against superior weaponry. Loved it from start to finish
Read more
One person found this helpful
Helpful
Report abuse

Sandra Bridge
5.0 out of 5 stars A look at the past
Reviewed in Australia on 11 February 2020
Verified Purchase
I found the book to reveal the ugly side of men looking to make fortunes, showing no understanding of others. Charlie was an adventurer, did things he was ashamed of, ended up in an asylum, but was able to show there was goodness in his heart.
A great read.
Read more
One person found this helpful
Helpful
Report abuse

narelle bennett
4.0 out of 5 stars Whistler's Bones
Reviewed in Australia on 5 July 2019
Verified Purchase
I liked this novel except towards the end after they had reached the Kimberleys, it seemed a bit like Forest Gump!!
Read more
Helpful
Report abuse

DOUG
3.0 out of 5 stars History / Fiction Sydney NSW
Reviewed in Australia on 24 November 2020
Verified Purchase
A pleasant read, of not so long ago.
The Hills District ,Hawkesbury in and around Sydney
One of this authors best.
Read more
Helpful
Report abuse
See all reviews

Vic Turner
5.0 out of 5 stars True Australia ?
Reviewed in the United Kingdom on 13 September 2019
Verified Purchase
I became lost in these (?) fictional/true pages of life of a cattle drover in Australia, although not brave enough, I would have liked to experienced (some) of the (to me) freedom of the wild open land before it became 'civilised', I'll be on the lookout for books in the same vein.
Read more
Report abuse

terry spellman
4.0 out of 5 stars Enjoyable
Reviewed in the United Kingdom on 15 January 2021
Verified Purchase
It’s an easy read to fill in your lockdown
Read more
Report abuse

TING
5.0 out of 5 stars enjoyable read
Reviewed in the United Kingdom on 12 October 2018
Verified Purchase
the story holds the readers attention throughout
Read more
Report abuse

Free Man of the world
5.0 out of 5 stars bit long winded it parts but very informative of life for early British Occupied Australia. Gives a glimpse of how occupation forces kill or subdue the native people
Reviewed in the United Kingdom on 28 August 2019
Verified Purchase
explains why natives are so subdued.
Not a good picture of the early police force.
the occupying forces left a terrible scar on the country
Read more
Report abuse

Frederick John Haines
5.0 out of 5 stars Man's progress and greed has no boundries.
Reviewed in the United Kingdom on 27 November 2020
Verified Purchase
It was an interesting insight as to how things were back in the day, very similar to the early American issues with the Indian tribes.
Read more
Report abuse
See all reviews
Get FREE delivery with Amazon Prime
Prime members enjoy FREE Delivery and exclusive access to movies, TV shows, music, Kindle e-books, Twitch Prime, and more.
> Get Started
Back to top
Get to Know Us
Make Money with Us
Let Us Help You
And don't forget:
© 1996-2020, Amazon.com, Inc. or its affiliates