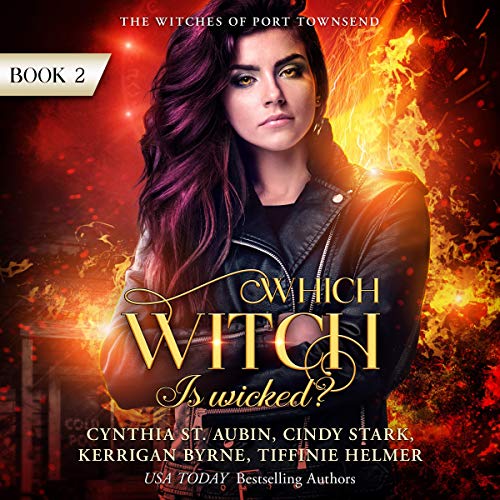 Which Witch Is Wicked?: The Witches of Port Townsend, Book 2

The de Moray witches are back, and this time there's hell to pay....

How does a fire witch battle her feelings for a sexy apocalyptic horseman when he's burned his way into her heart?

In a world now plagued with signs of the four opened seals, Claire must choose between her loyalty to her sisters and her longing to embrace her taste for War. When faced with a new evil, will Claire's desperate attempt to fix the past incinerate them all?

How does an air witch learn to fly when she's falling for the wrong man?

With an army of vengeful undead rattling the gates, Aerin feels powerless to save her sisters from their ominous destiny. Turning to Pestilence for help is the first in a series of choices that might tempt her to embrace her darker nature. When faced with a whirlwind of dangerous decisions, she's left to wonder: does the end justify the means?

How does an earth witch come to terms with the fact that she and Death created a life?

Consumed with the terrifying possibility that she's carrying the antichrist, Tierra must also contend with her sisters dabbling in the dark arts. But will Tierra's newfound powers help stop the apocalypse or widen the growing chasm between them all?

How does a water witch stay afloat when she finds herself at the mercy of a man who has none?

Kidnapped by Conquest and separated from her sisters, Moira must face down not only the demons within herself, but also a force whose lust for power could destroy everything she loves. But when Moira learns of a new threat larger than anything she or her sisters had ever imagined, will joining forces with Conquest turn the tide for good...or evil?

The de Moray sisters will have a devil of a time fighting the most sinister threat they've encountered yet...the wickedness within.

Switch between reading the Kindle book & listening to the Audible narration with Whispersync for Voice.
Get the Audible audiobook for the reduced price of $36.54 after you buy the Kindle book.
Learn more about membership
By completing your purchase, you agree to Audible’s Conditions Of Use and Privacy Notice.
Sold and delivered by Audible, an Amazon company
Share

4.6 out of 5 stars
4.6 out of 5
82 global ratings
How are ratings calculated?
To calculate the overall star rating and percentage breakdown by star, we don’t use a simple average. Instead, our system considers things like how recent a review is and if the reviewer bought the item on Amazon. It also analyses reviews to verify trustworthiness.

J Bryant
5.0 out of 5 stars Entertaining
Reviewed in Australia on 24 October 2020
Certainly a five star entertaining read. A few anomaly’s between authors, misspelling of surname etc. But other than that a fun read.
Read more
Helpful
Report abuse
See all reviews

Kindle Customer
5.0 out of 5 stars Will her sacrifice be enough to protect her sisters.
Reviewed in the United Kingdom on 21 July 2017
Verified Purchase
Fabulous! Death is going to be a Daddy and someone isn't happy about it. How will they strike and what can the girls do about it? Can one of them offer up herself as a sacrifice for the others? Will the other witches try to take them out of the picture? A terrific read full of action and the Four Horsemen are terrific! A must read.
Read more
Report abuse

Amazon Customer
5.0 out of 5 stars Got excited
Reviewed in the United Kingdom on 20 December 2021
Verified Purchase
I am so enjoying this series of books. Had me on the edge of my seat. Fabulous read
Read more
Report abuse

Little Mermaid
5.0 out of 5 stars Moira is life
Reviewed in the United States on 30 August 2021
Verified Purchase
First of all, throughout book 1 and 2 I thought Moira was rather annoying. I was so wrong. The last few chapters of this book completely changed my outlook and the last chapter literally brought me to tears. It’s surprising that four different authors can be so in sync to make this work but they really do. Fantastic writing. Fantastic storyline. Rarely does the series get better but I can say that this series gets better and better.
Read more
2 people found this helpful
Report abuse

LA Williams
5.0 out of 5 stars Hold on to your pointy hats! This is a fun ride!
Reviewed in the United States on 14 October 2015
Verified Purchase
The seals are opening, one by one...

The quintuplet sisters Claire, Aerin, Tierra and Moira are back, and facing down stranger and scarier dangers as they inadvertently continue to open the seven seals, one at a time. The four horsemen are still trying to stop the Apocalypse (with a capital A), each knowing that at least one of witches must die in order to prevent it from happening.

Determining which witch is to be whacked is a difficulty – each horseman has a thing for one of four bewitching ladies, and none of the men can seem to fulfill their honor-bound duty. There's a new player in town, dividing loyalties, and straining relationships.

With the number of unbroken seals dwindling and tensions mounting, the choice of which of the sisters will die may be taken out of the horsemen's hands.

“Isn't that the ultimate goal here?” Julian asked. “To end this nightmarish Apocalypse?”
“They don't all have to die,” Dru reminded them. “Only one.”

Which Witch is Wicked? is the second book in the Witches of Port Townsend Series, and is a tight anthology penned by Cynthia St. Aubin, Kerrigan Byrne, Cindy Stark and Tiffinie Helmer. The first book in the series, Which Witch is Which? was released a year ago and ended on a semi-soft cliffhanger.

This second installment begins a week after the first book in the series ended. I highly recommend reading the first book before starting this one, even if you've already read it. While there is some exposition, there is not enough to cover all of the major events of the first book, and a refresher (or just plain fresh) read makes jumping into the story a lot smoother.

The stories are once again divided by sister, each written by a separate author. In the seamless style of the first book, there is a perfect flow without a discernible difference in overall voice from writer to writer. As a reader of all of these authors, I am amazed. They each have their own style, and the collaboration on this work is completely harmonious. None of their styles stand out, they just blend as though written by one person.

There is a little retreading of old ground here, in the form of reminders of the Apocalypse and the way to end it – causing the emotional turmoil of the couples. However, it is not tedious because it is woven into the intensifying of the relationships of the sisters, the men, as well as the romantic combinations.

More is at stake now, and that leads to character growth more on the part of the sisters than the horsemen. While the witches definitely stand out in my mind, I have trouble separating the horsemen. (Note: I fully admit, that may be a failure on my part.) The introduction of a new character acts as a catalyst for further discord. While not exactly being a fresh take on this particular villain, there's enough individuality and malice to keep the reader guessing.

The story moves along briskly and smoothly, with some short breathers. Due to the number of characters, there is a lot happening. I can't say I have the whole ending figured out, but there is some hefty foreshadowing which makes me wonder if it isn't a flashy red herring. Ending on another cliffhanger (not brutal, but obvious), the way is neatly paved for book three.

With humor, drama, action, and growing tension, this book has sidestepped the “sophomore slump”. I would say it's not quite as good as the first, but only by a very small margin. Along with other readers, I bemoan the time between releases, which attests to the power of the story.
Read more
4 people found this helpful
Report abuse

MetalMom
5.0 out of 5 stars Witchy and Wickedly Good
Reviewed in the United States on 25 October 2015
Verified Purchase
The second installment of the Witches of Port Townsend series was a little less even, but still a rollicking great adventure. The witches have brought a heap of trouble on themselves, including a very unsavory seal-opening that finds them fighting the undead for their lives, brilliantly I might add! The introduction of Lucy felt a little more caricaturish in the beginning, but by the end you feel the evil. She gets her comeuppance, or comeoutance that is, which will likely serve to make her even more pissed off in future books. I love how Aerin takes control. I love how Tierra remains rooted to good. I wish Claire would kick her boy toy to the curb. And Moira broke my heart. How many of us have ruminated on the idea that others would be better off if we weren't around? Moira channeled that feeling so realistically...

The men remained incredibly hot, and frustratingly tied to their legacies, however I see them beginning to shrug off the idea of destiny. Although with one of their numbers trying to fight his way back from hell, somebody's gonna have some splainin to do!

Excellent work, Witches! Can't wait to see what happens next.
Read more
One person found this helpful
Report abuse
See all reviews
Back to top
Get to Know Us
Make Money with Us
Let Us Help You
And don't forget:
© 1996-2022, Amazon.com, Inc. or its affiliates