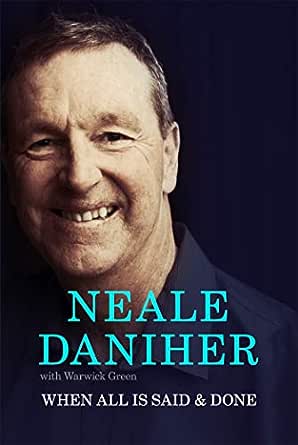 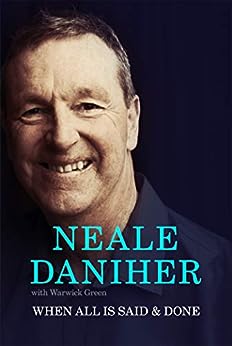 When All is Said & Done Kindle Edition

Faced with the greatest fight of his life, football great and MND sufferer, Neale Daniher, shows us how to live well and make every day count.

LONGLISTED FOR ABIA BIOGRAPHY BOOK OF THE YEAR 2020

A wise man said, 'Life can only be understood backwards; but it must be lived forwards.'I understand the wisdom of this - right now, I don't have much 'forwards' left.

Neale Daniher sat down to pen a letter to the grandchildren he'll never get to know. And then he kept on writing ...

In 2013, the AFL legend was diagnosed with Motor Neurone Disease - a cruel and incurable condition. He had a choice. He could spend his remaining time focused on himself, or he could seize the opportunity to make a better future for others.

Neale is no stranger to challenge. He grew up on a farm in remote New South Wales, the third of eleven children. He battled injury during his football career with Essendon, then jumped on the coaching rollercoaster, leading Melbourne for a decade. As general manager of football operations, he was part of the West Coast Eagles' cultural rebuild.

From the hard-won wisdom of life on the land and the love of his family, to the triumphs and gutting lows of elite football, Neale has learnt to make the most of the cards he's been dealt - to always live with purpose and to appreciate what he has.

True to form, Neale chose to stare down the disease he calls 'The Beast', and in 2014 he co-founded FightMND, an organisation that has since invested over $40 million into research and care initiatives. In 2015, he became the public face of the foundation's biggest fundraising event, The Big Freeze.

When All is Said & Done is a book of stories and wisdom from a man who has always held his beliefs to the Bunsen burner of life. Neale is unflinchingly honest, sharing a timely reminder that, even though life doesn't promise to be fair, we all have the power to choose how to make our time on this earth matter.

Christine J Tilyard
5.0 out of 5 stars Life
Reviewed in Australia on 16 November 2019
Format: Kindle EditionVerified Purchase
Great read about football, morals, life and expectations. Yes, there is football history and talk but amongst that is Daniher's thoughts on moral issues, family upbringing and life in general.
A great read despite your AFL allegiances.

Peter Maloney
5.0 out of 5 stars Inspirational
Reviewed in Australia on 8 December 2019
Format: Kindle EditionVerified Purchase
So much more than a football biography. A great read of a bloke who has experienced all aspects of life and has the ability (with Warwick Green) to translate his feelings to words that I related to immediately. Thoroughly enjoyed the book and will give my son one for Christmas. Thankyou Neale. I feel I know you now.
Read more
Helpful
Comment Report abuse

Stuart Bell
5.0 out of 5 stars Saying is easy doing is hard, like staying the journey
Reviewed in Australia on 27 November 2019
Format: Kindle EditionVerified Purchase
I enjoyed the way Neil weaved his philosophies with life experience to explain which place he was in. It was very open explanation of life, love and experiences. Not often I cry when I finished a book but was magnificent letter at end that is very relatable.
Read more
Helpful
Comment Report abuse

An avid reader.
5.0 out of 5 stars Neal keeps up working with a smile, with wonderful people helping him gets great results.
Reviewed in Australia on 20 November 2019
Format: Kindle EditionVerified Purchase
What an absolutely wonder human. Never give up and keeps on working to improve life for people with a disability.
Read more
Helpful
Comment Report abuse

Neil Sidwell
5.0 out of 5 stars Excellent look at what matters in life
Reviewed in Australia on 18 January 2020
Format: HardcoverVerified Purchase
This book is more than just a look at Neale's career in AFL it is a reflection on what is really important in life.
Read more
Helpful
Comment Report abuse

Anthony Tingiri
5.0 out of 5 stars Great Read
Reviewed in Australia on 29 December 2019
Format: Kindle EditionVerified Purchase
A great insight in dealing with people and issues. Fully recommend the book. Good luck Neale, our thoughts are with you.
Read more
Helpful
Comment Report abuse

Rachel, Mum to 4
5.0 out of 5 stars Amazing
Reviewed in Australia on 28 November 2019
Format: HardcoverVerified Purchase
Wow, this book turned up when it should of and I didn’t take any time reading it, just wow, amazing definitely recommend the read!
Read more
Helpful
Comment Report abuse

Amazon Customer
5.0 out of 5 stars Excellent
Reviewed in Australia on 7 March 2020
Format: Kindle EditionVerified Purchase
I was so impressed with Neile’s attitude to life and all that was happening around him. Lots of life lessons to follow!
Read more
Helpful
Comment Report abuse
See all reviews from Australia

Brendan Jones
5.0 out of 5 stars An attitude of gratitude, pearls of wisdom, a life well lived and loved
Reviewed in the United States on 20 December 2019
Format: Kindle EditionVerified Purchase
Neil showed that no matter what challenges life serves up you get to choose your attitude and response.
Every day is precious, make the most of them and don't waste valuable time whingeing. Always look on the bright side of life.
Play On.