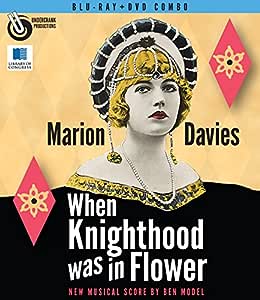 Format: Blu-ray
4.8 out of 5 stars 26 ratings
International product from outside Australia

Marion Davies stars as Mary Tudor in the breakout role and big-budget costume epic that established her as a movie star. Davies plays Mary Tudor, sister of King Henry VIII, whom the king aims to use for political gain by offering her hand in marriage to King Louis XII of France. Look for a young William Powell in his second movie role as one of the story's villains. For period authenticity, no expense was spared on the production's costumes, armor and tapestries or on Joseph Urban's huge, lavish sets.

WHEN KNIGHTHOOD WAS IN FLOWER (1922) is presented here in a brand new restoration, with a new theatre organ score by Ben Model. The film was scanned from an original 35mm nitrate print preserved by the Library of Congress, its color tints have been reinstated and the hand-colored sequence has been digitally replicated. This is the first time the film has been seen as it appeared in the 1920s.

The package includes a 16-page illustrated booklet with film notes by Lara Gabrielle Fowler, as well as both Blu-ray and DVD editions of the film.

Both discs are region-free.

Bookworm123
5.0 out of 5 stars UNDERCRANK: The Definitive Knighthood!
22 September 2017 - Published on Amazon.com
Verified Purchase
When Knighthood Was In Flower is one of Marion Davies finest films and an epic masterpiece of the silent era. While it has been available in various "underground" versions through the years, there was never a really good print available to the public - that is, until now! Undercrank Productions has finally ended the long wait with this gorgeously and painstakingly restored deluxe version. For one low price ($19.95) you get not only the Blu-Ray version, but also a DVD version and a 16-page booklet with an insightful essay by film historian Lara Gabrielle Fowler, who is currently working on a biography of Ms. Davies.

The film itself is pristine - so crisp and clear you'll think it was shot yesterday - and has a lovely score specially composed for the film by Undercrank founder, Ben Model. The print was derived directly from nitrate prints held by the Library of Congress (you can't get better than that!), with the original tints, tones and hand-coloring restored according to contemporary accounts.

I can't begin to tell you how long I've waited to see this film as it was meant to be seen - never mind the money I've spent buying inferior copies. [The worst being the vastly overpriced ($34.99) version of Knighthood offered by Silent Gems Collection, which turned out to be a truly crappy, hacked up version on DVD-R.] If you are looking for the definitive version of this gorgeous Marion Davies film, be sure to get Undercrank Productions Blu-Ray/DV combo - you won't be sorry!!

John Brooks
5.0 out of 5 stars Silent Masterpiece
7 August 2017 - Published on Amazon.com
Verified Purchase
This a great film with one of the top stars of the silent era, Marion Davies, and you can see why as she plays her character who is the sister of Henry VIII who is pitted against her brother to marry the man she loves. I was amazed at how well the restoration of the film was down to the prints and even the original tints, there is very minimum sign of wear and was one of the sharpest silents I've seen. Ben Model did a superb job with a brand new organ score. There are great performances by Forrest Stanley(playing Charles Brandon, the man that Marion Davies loves), Lyn Harding who plays Henry VIII, and a very young William Powell who plays Francis I. You can tell how they spared no effort with the elaborate gowns, stand out swashbuckling including even by Davies, and you see Davies be very good at comedy. This was a blind buy for me, but I consider this silent a masterpiece. Thanks to all those on Kickstarter and Ben Model for bringing this masterpiece to BluRay/DVD.
Read more
5 people found this helpful

Stephen C. Charitan
5.0 out of 5 stars Marion Davies: The Jewel in the Crown
2 August 2017 - Published on Amazon.com
Verified Purchase
What an outstanding job of restoration. If this is the quality of preserved material in the vaults of the Library of Congress, more needs to be gotten out to the public. While I am grateful for Warner Archive, some of their source material is in appalling condition - for example does a better version of Garbo's "Mysterious Lady" exist at the L of C as opposed to the deteriorated mess issued by Warners?

Having seen Marion Davies in "Show People" (her best, with Billy Haines in top form), "The Patsy" (a close second), "Floradora Girl," "Marianne," "Beauty's Worth," (another sterling transfer from the L of C collection) and now "Knighthood" it’s hard to imagine the accepted wisdom of a career foisted on an unwilling public by the wealth and influence of W.R. Hearst. She is a genuine delight in all of the above - a personality as fresh as springtime - natural and unaffected whether playing comedy or pathos - and as stunningly beautiful as any MGM goddess you could name.

Don't assume more than bare bones historical accuracy in this story of Mary Tudor, sister of Henry VIII. The plot is worked out like an operetta with lovers Mary and Charles Brandon (a dull Forrest Stanley looking like a Life Insurance salesman in fancy dress…) playing off Henry VIII and Louis XII who function less as monarchs and more like comic relief. The settings by Metropolitan Opera designer Joseph Urban are lavish and literal – no German expressionism here. While the men sport reasonably correct period dress the ladies, particularly Marion, look like flappers in longer skirts. Their headgear is thoroughly modern and could be worn by Gloria Swanson or Leatrice Joy in one of de Mille’s contemporary sex farces. All of Mr. Hearst’s expenditures on this project would be for naught without Marion Davies balancing it all, lightly and elegantly on the tip of her manicured finger.

Michael Gebert
5.0 out of 5 stars Top-notch silent release of a beloved star's breakthrough vehicle
31 July 2017 - Published on Amazon.com
William Randolph Hearst spared no expense in making this costume epic a showcase for his girlfriend Marion Davies, and some have concluded that the long-unseen film, a hit in its day, must be an overstuffed stiff. On the contrary, it's a lot of fun and Davies, a spry comedienne, wears the production lightly on her shoulders as she plays the younger sister of Henry VIII, trying to outwit her imperious brother so she can wind up with the man she really loves. (It's based on true historical events, very loosely I'm sure.) She gets to wear fabulous gowns, swashbuckle in male drag, do comedy and suffer nobly in the finest silent heroine tradition. The film is a delight, and so is this video release, which uses materials from Davies' own print (held at the Library of Congress) combined with material from the Academy in LA to give this the A-plus treatment; visual quality is first-rate throughout, with original tinting colors and even some hand tinting of torches in one chase scene, and the musical score by Museum of Modern Art accompanist Ben Model (who also produced the disc after raising money for it via Kickstarter on silent enthusiast sites like NitrateVille), done on the computer with the sounds of a sampled organ, hits just the right notes of playful pomp. In short, a fun example of high quality commercial star cinema from the early 20s which should entertain anybody interested in classic film.
Read more
14 people found this helpful
Go to Amazon.com to see all 24 reviews 4.7 out of 5 stars