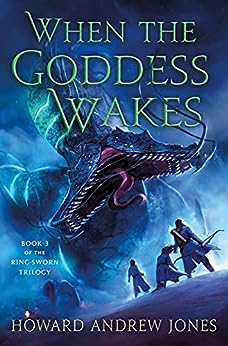 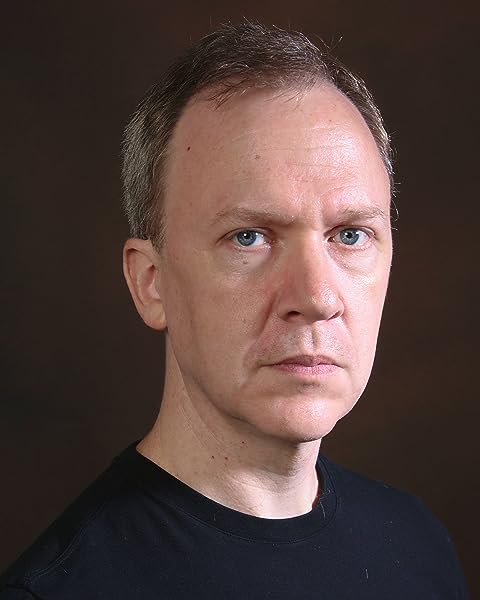 When the Goddess Wakes: Book 3 of the Ring-Sworn Trilogy Kindle Edition

by Howard Andrew Jones (Author) Format: Kindle Edition
See all formats and editions
Sorry, there was a problem loading this page. Try again.

In When the Goddess Wakes, the final book of the Ring-Sworn trilogy, Howard Andrew Jones returns to the five realms of the Dendressi to conclude his heroic, adventure-filled epic fantasy trilogy.

The Naor hordes have been driven from the walls, but the Dendressi forces are scattered and fragmented, and their gravest threat lies before them. For their queen has slain the ruling council and fled with the magical artifacts known as the hearthstones, and she is only a few days from turning them to her mad ends.

The Altenerai corps has suffered grievous casualties, and Elenai’s hearthstone and her source of sorcerous power has been shattered. She and her friends have no choice but to join with the most unlikely of allies.

Their goal: to find the queen’s hiding place and somehow stop her before she wakes the goddess who will destroy them all…

Praised for his ability to write modern epic fantasy that engrosses and entertains, Howard Andrews Jones delivers a finale to his trilogy that reveals the dark secrets and resolves the mysteries and conflicts introduced in the first two books of this series.

Praise for When the Goddess Wakes:

Jones offers immensely satisfying answers to lingering questions about his complex world while keeping the reader hooked with vivid, creative descriptions of alternate realms and masterful character work. Filled with action and surprises, this emotional roller coaster brings the trilogy to a bittersweet but worthy conclusion. --Publishers Weekly (starred review) Howard Andrew Jones's Ring-Sworn Trilogy comes to a rousing conclusion. Jones is a scholar of heroic fantasy as well as one of its most adept current creators. --Black Gate When the Goddess Wakes solidly ends Howard Andrew Jones' Ring-Sworn Trilogy, as the titular threat, building since the beginning of the series, brings danger, adventure, and notes of heroic sacrifice. --Nerds of a Feather

Praise for Upon the Flight of the Queen:

The second book in the Ring-Sworn Trilogy, Upon the Flight of the Queen is just as thrilling and immersive as the first book. War and espionage, magic and dragons, and compelling characters fill this epic fantasy, which will fully satisfy fans of the first book and leave them eagerly waiting for book three. --San Francisco Book Review Exhilarating...This powerful epic fantasy is a heart-racing, action-packed thrill. --Publishers Weekly Praise for For the Killing of Kings:

Jones's exciting epic will have readers laughing, crying, and cheering for the men and women of the Altenerai. --Publishers Weekly (starred review) "Howard Andrew Jones, an aficionado nonpareil of heroic adventure, has surpassed himself. For the Killing of Kings is the opening salvo of a thrilling epic set in a world that only he could envision: a thunderous, sword-clanging treat." -- Ian Tregillis, author of The Mechanical

"Honor pushed out of fashion by fanaticism, honest talent diverted by tyranny, monsters at every border, deceit guiding all: For the Killing of Kings is a fantasy for our times, with a sword at its backbone but humans at its heart. World-building shines out of every ritual, in fragments of poetry and lines of plays. There are strong women on practically every page, strong friendships, plenty of warriors and mages, fight scenes galore, and a sense of playfulness to parry each stroke of solemnity. Reading Howard Andrew Jones is like opening a present from a friend who keeps promising, with a cheeky grin: "This is my best one yet." And it's always true." -- C. S. E. Cooney, World Fantasy Award-winning author of Bone Swans --This text refers to the hardcover edition.

In this sequel to Upon the Flight of the Queen, Jones returns to the ring-sworn champions of the Altenerai to continue this thrilling, imaginative and immersive epic fantasy trilogy. --This text refers to the hardcover edition.

In this sequel to <i>Upon the Flight of the Queen</i>, Jones returns to the ring-sworn champions of the Altenerai to continue this thrilling, imaginative and immersive epic fantasy trilogy. --This text refers to the hardcover edition.

When not helping run his small family farm or spending time with his amazing wife and children, HOWARD ANDREW JONES is hunched over his laptop or notebook. He has worked as a TV cameraman, a book editor, a recycling consultant, and a college writing instructor. He edits the sword-and-sorcery magazine <i>Tales From the Magician’s Skull </i>and serves as executive editor of the Perilous Worlds book imprint. <i>When the Goddess Wakes</i> is the third book in the Ring-Sworn Trilogy. --This text refers to the hardcover edition.

When not helping run his small family farm or spending time with his amazing wife and children, HOWARD ANDREW JONES is hunched over his laptop or notebook. He has worked as a TV cameraman, a book editor, a recycling consultant, and a college writing instructor. He edits the sword-and-sorcery magazine Tales From the Magician’s Skull and serves as executive editor of the Perilous Worlds book imprint. When the Goddess Wakes is the third book in the Ring-Sworn Trilogy. --This text refers to the hardcover edition.
Read more

Howard Jones’s debut historical fantasy novel, The Desert of Souls, (Thomas Dunne Books 2011), was widely acclaimed by influential publications like Library Journal, Kirkus, and Publisher’s Weekly, where it was labeled “a splendid flying-carpet ride.” It made Kirkus’ New and Notable list for 2011, and was on both Locus’s Recommended Reading List and the Barnes and Noble Best Fantasy Releases list of 2011. Additionally, The Desert of Souls was a finalist for the prestigious Compton Crook Award, and a featured selection of The Science Fiction Book Club. Its sequel, The Bones of the Old Ones, will become available on December 11, 2012. He is hard at work on a third historical fantasy novel about Dabir and Asim as well as a sequel to his Pathfinder Tales novel, Plague of Shadows.

Howard was the driving force behind the rebirth of interest in Harold Lamb’s historical fiction, and assembled and edited 8 collections of Lamb’s work for the University of Nebraska Press. He served as Managing Editor of Black Gate magazine from 2004 onward, and still blogs regularly at the magazine web site.

When not helping run his small family farm or spending time with his wife and children, he can be found hunched over his laptop or notebook, mumbling about flashing swords and doom-haunted towers. He’s worked variously as a TV cameraman, a book editor, a recycling consultant, and most recently, as a writing instructor at a mid-western college.

Patrick Kanouse
5.0 out of 5 stars A hurtling, thrilling, glorious finish
Reviewed in the United States on 4 October 2021
Verified Purchase
The third book in the Ring-Sworn Trilogy is fantastic. Full of action and verve, Jones brings forward the expected ending to provide an even more fantastic conclusion. Smart, action packed, and full of rich characters, this is a great conclusion.
Read more
Report abuse
See all reviews
Back to top
Get to Know Us
Make Money with Us
Let Us Help You
And don't forget:
© 1996-2022, Amazon.com, Inc. or its affiliates