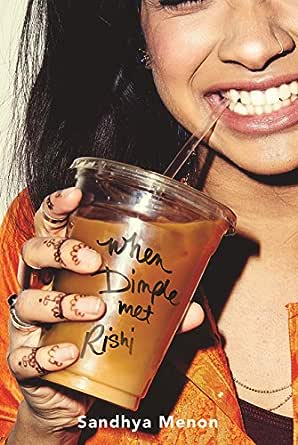 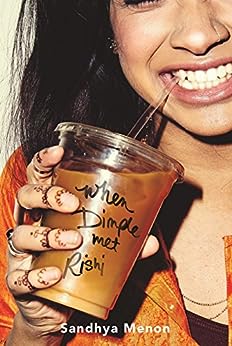 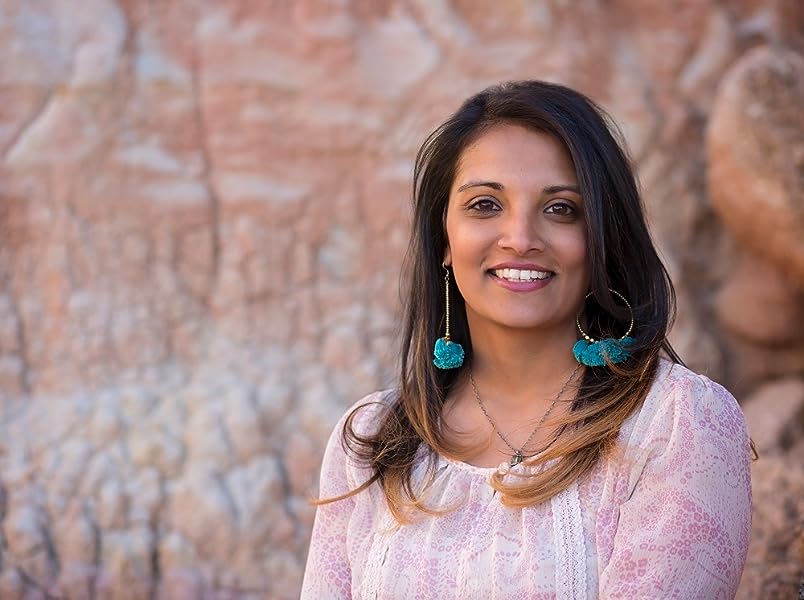 When Dimple Met Rishi: The laugh-out-loud YA romcom Kindle Edition

Menon wrote an utterly delightful novel and broke my heart by writing an ending because I want nothing more than to keep reading about Dimple and Rishi forever. For-EV-er. I fell in love with the cover and without reading the summary dove into reading it. The characters, story, and spirit of the book match the gorgeousness that is the cover. Dimple Shah and Rishi Patel may be two different people starting their paths into adulthood but they're both about to find out that life stands in your way and shakes things up no matter how much you plan. This book was a hug to my black heart that made me laugh and constantly cheer for the characters. I'm looking forward to it being a huge hit of 2017. -- Jamie Canaves * Book Riot, The Best Books We Read in November *

Will opposites attract when Dimple meets Rishi? A laugh-out-loud, heartfelt YA romantic comedy as joyfully refreshing as The Mindy Project and perfect for Rainbow Rowell fans.
See all Product description

Sarah Fairbairn
5.0 out of 5 stars A cute and quick read that I’d happily read again.
19 October 2017
Format: Kindle EditionVerified Purchase
Oh, what awkward wonderfulness this story was. I'm still recovering from the warm and fuzzy overload.

Dimple is quite stubborn and has an intense desire to be free - free of other people's expectations.
Rishi feels his purpose in life is to please his parents.

Dimple is super excited to be out on her own attending a six-week coding workshop and has no idea her parents have set her up.

Rishi is super excited that he may be potentially meeting his future wife and will be getting the chance to get to know her during the six-week coding workshop they will be attending.

Cue hilarious meet cute that involves Dimple assaulting Rishi with an iced coffee. Wait… I don’t think I can put the words meet cute and assault together in a sentence. Hmm… was it assault… Nar self-defence, she thought he was crazy at the time.

There are bits of humour sprinkled all through this love story about juggling parental expectations, standing up for yourself, following your dreams and arranged marriages. I actually loved the positive examples of arranged marriage, as on my side of the world they can tend to be portrayed in a negative light.

Dimple and Rishi click with each other early on, but Dimple tries and *spoiler* fails to fight it. Yeah so maybe your parents did know what they were doing, hey Dimple!

My inner teenager found Dimple fairly relatable and immediately fell for Rishi.
All in all it is a cute and quick read that I’d happily read again.

Read3rz Re Vu
TOP 1000 REVIEWER
5.0 out of 5 stars This book game me a warm and fuzzy overload
27 June 2018
Format: Paperback
“Seeing an Indian Girl on a cover, someone I could possibly identify with – yes, even though this is YA, it still means something to see myself (at that age) reflected on the cover of a book. Rishi might give me some reservatons but the cover and the book that revolves around an Indian girl, who is trying to forge her own path, is something I identified with.”

“This book game me a warm and fuzzy overload (and I mean that’s a good thing). There are bits of humour sprinkled throughout this awkwardly adorable love story about juggling parental expectations and following your dreams. I loved the positive examples of arranged marriage portrayed in the story. Everything about this book was a breath of fresh air to me.”

Dunyazad
3.0 out of 5 stars Mixed messages
14 July 2018 - Published on Amazon.com
Verified Purchase
I have very mixed feelings about this one. I loved the first third or so, which was cute and funny and exactly what I wanted in a light summer read. Dimple Shah has just finished high school and is eager to escape from her overbearing parents. She dreams of a career in web design, so she's thrilled when her parents agree to let her attend a six-week summer program that may offer a chance to meet her woman-in-tech hero. But she soon finds out that the only reason they sent her there was because they were hoping to arrange a marriage between her and the son of some of their friends....

So, Dimple's initial interactions with Rishi were hilarious, and I appreciated the fact that she was a career-driven woman in tech who didn't care about things like makeup and clothes.

That was before the whole Insomnia Con program turned out to be a big letdown that wasn't actually about learning. It includes a talent show that gets far more attention than the actual coding aspect; the talent show is important because the winners get a $1000 prize that they can use to hire developers to work on their app, increasing their chances of winning the overall design competition, which would allow them to meet and possibly collaborate with the famous Jenny Lindt. The ultimate goal is not to build skills and actually create your own app, but to use money and connections to make it happen for you. If you're not named the winner of the overall event, the whole experience is useless: you won't even get feedback on the project that you've worked on for six weeks, and of course there's no chance of completing it yourself; without a big name behind you, you might as well give up. So instead of being someone with the drive and determination to achieve success for herself, Dimple was reduced to a helpless fangirl. That was a big disappointment.

The takeaway was that even if a woman cares more about her intellectual abilities than her physical appearance, what really matters is her natural dancing ability. (Which incidentally also manages to undermine women who put time into physical training—obviously a week's worth of practice is all it takes to dance like a professional.)

I should note that I have no problem with the basic premise that a woman who's focused on her career can also have time for love; obviously that was an expected element of this story, and I wasn't hoping or expecting that Dimple would end up successful but single. It's the more insidious messages that bothered me.

Also, a lot of the time Dimple is just mean.
Read more
9 people found this helpful

Nicole @ Nicoles' Novel Reads
5.0 out of 5 stars The novel is exuberant!
31 May 2017 - Published on Amazon.com
Verified Purchase
Dimple Shah got into her dream college, Stanford. However, there is this summer program called Insomnia Con in San Francisco that she wants to attend but she needs to find a way to convince her parents to her go. Dimple's parents are more concerned for Dimple finding a I.I.H. (aka the Ideal Indian Husband). All Dimple wants is to live her life and immense herself in web development learning from the best. Rishi Patel is the total opposite. He embraces his parents to find the perfect future wife. Rishi's parents knew Dimple would be at the Insomnia Con program and they already know Dimple's parents.

The first official meeting between Dimple and Rishi is priceless! Dimple seems to despise Rishi but overtime she warmed up to him and even they even become friends. She knows it's not his fault and even tells him to stay when he offered to go home early. Their budding friendship ends up turning into something more.

Sandhya Menon's debut novel is charming with just enough humor. This romantic comedy shares the views of two children of two sets of Indian parents. I found it refreshing to read a novel that shows two sides of a coin. Dimple is a quirky yet spirited, goal-orientated young lady who wants to advance her career. She doesn't care about arrange marriages; she wants freedom and her independence. Rishi, on the other hand, is a hopeless romantic trying to woo Dimple. He believes in tradition while Dimple finds the culture suffocating her. Rishi's passion is art but he sees it more like a hobby and not a practical field to go into for a career.

Dimple is a role model for teenage girls. It's okay to like math, science and technology. It's okay to wear glasses and not to wear any makeup. I wish I read about Dimple when I was younger. Nowadays STEM is pretty big in education, especially for females. STEM related fields are still male dominated. It's exhilarating to read about a career-driven young lady who is passionate about web development and not about makeup and boys.

When Dimple Met Rishi tackles the struggles of desires and passions. Dimple and Rishi both gather the strength to vocalize what they are passionate about and what they want in life. Dimple's passion is web development and Rishi's passion is art. However, even though they don't want to admit, the love they have for one another is strong and they cannot let it go no matter what they want in life. Do things that make you happy! Trust your gut feeling!

Menon writes When Dimple Met Rishi with sincerity. The novel is exuberant! I was smiling when I was reading the novel for most of the time. When reading When Dimple Met Rishi, I see myself through both Dimple and Rishi. I have never read a book where I see myself completely in. I can see a part of myself in Dimple and a part of myself in Rishi. Menon fuses culture, socio-economics and overriding gender stereotypes in this rom-com. When Dimple Met Rishi is a fluffy yet heartwarming read. I highly recommend it and it's definitely a new favorite of mine.
Read more
13 people found this helpful
Go to Amazon.com to see all 339 reviews 4.3 out of 5 stars
Get FREE delivery with Amazon Prime
Prime members enjoy FREE Delivery and exclusive access to movies, TV shows, music, Kindle e-books, Twitch Prime, and more.
> Get Started
Back to top
Get to Know Us
Make Money with Us
Let Us Help You
And don't forget:
© 1996-2020, Amazon.com, Inc. or its affiliates