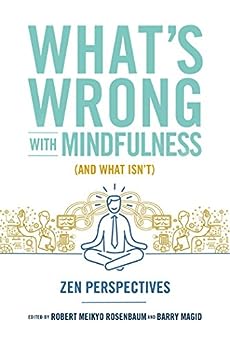 "What's Wrong with Mindfulness (And What Isn't) does a fantastic job of detailing these setbacks and offering a clear picture of what earnest practice looks like."-- "The Tattooed Buddha"

"The essays in What's Wrong With Mindfulness mutually illuminate each other, like the facets of a jewel. The critical and historical analyses create a space in which the personal accounts of mindfulness, grounded in years of Zen practice, sparkle with creativity and the potentiality of free play."--Linda Galijan, San Francisco Zen Center

"If you're really into mindfulness; if you really want to know about mindfulness deeply, then this is a book for you to read and, more, to contemplate. This isn't about how to use mindfulness to make you happy, or to deal with stress, or to help with your business. This is about knowing more profoundly what it is all about and what it isn't. Be prepared to be moved."--Arthur C. Bohart, professor emeritus California State University Dominguez Hills

"More than ever, with mindfulness now an in thing to do rather than be, I am awed, appreciative and impressed by the daring of the editors to examine the meaning of the word "mindfulness" and how it is being lived. It is refreshing to read a book of wisdom and depth by people of experience who are committed to maintaining the integrity of this ancient tradition. I applaud the questions raised and the diversity of thought and practice. May we all be awake, alive and read this book!"--Elana Rosenbaum, author of Being Well (Even When You're Sick)

"Raises urgent questions about Mindfulness--capital "M"--now that it has been extracted from its Buddhist roots."--Gaelyn Godwin, Abbot, Auspicious Cloud Temple, Houston Zen Center

"This book is the best thing I've read on mindfulness and the mindfulness movement."--David R. Loy, author of A New Buddhist Path

"This thoughtful book offers reassurance to those concerned about maintaining authenticity amidst the current hype about mindfulness. The book presents a range articulate and courageous voices that collectively expand the reader's understanding of mindfulness in the context of Zen teachings. What's Wrong with Mindfulness merges deep respect for tradition with thorough acceptance of contemporary times."--Deborah Schoeberlein David, author of Living Mindfully --This text refers to the paperback edition.

Robert Meikyo Rosenbaum is a neuropsychologist and psychotherapist who now devotes himself full time to Zen and Dayan (Wild Goose) Qigong. He received lay entrustment from Sojun Mel Weitsman of Berkeley Zen Center and is authorized by Master Hui Liu as a senior teacher of the Taoist practice of qigong in the lineage of Yang Meijun. Bob is the founding teacher of the Meadowmont Sangha in the Sierra foothills and the author of Walking the Way: 81 Zen Encounters with the Tao Te Ching and Zen and the Heart of Psychotherapy. He also enjoys leading annual meditation/qigong trekking retreats in the Nepal Himalayas (www.zenqigong.com). Rosenbaum lives in Emeryville, CA. Barry Magid is a psychiatrist and psychoanalyst practicing in New York City, and the founding teacher of the Ordinary Mind Zendo, also in New York. He is the author of the Wisdom titles Ordinary Mind: Exploring the Common Ground of Zen and Psychoanalysis, Ending the Pursuit of Happiness: A Zen Guide, and Nothing Is Hidden: The Psychology of Zen Koans. Magid lives in New York, NY. --This text refers to the paperback edition.

3.8 out of 5 stars
3.8 out of 5
6 global ratings
How are ratings calculated?
To calculate the overall star rating and percentage breakdown by star, we don’t use a simple average. Instead, our system considers things like how recent a review is and if the reviewer bought the item on Amazon. It also analyses reviews to verify trustworthiness.

Emily
3.0 out of 5 stars Enticing title
Reviewed in Canada on 28 June 2017
Verified Purchase
Some chapters were better than others.
Read more
Report abuse

C. Roderick
5.0 out of 5 stars A thoughtful guide to those who choose to meditate
Reviewed in the United States on 5 September 2017
Verified Purchase
Wonderful, thoughtful, and timely...McMeditation needs critics...here they are... if you ever asked yourself what road you were on in your meditation practice, this book will help shed light on "the way"....
Read more
4 people found this helpful
Report abuse

Anthony Coleman
4.0 out of 5 stars Good Collection of Essays
Reviewed in the United States on 17 December 2016
Verified Purchase
In What's Wrong with Mindfulness (and What Isn't), a host of Zen authors critically interact with the current mindfulness movement in the West. Having witnessed the rise and fall in the popularity of Zen practice, these authors are in a unique position to offer advice to leaders in the mindfulness movement. Contributors to this book range from being extremely critical of the direction of mindfulness to more sympathetic outlooks. Mindfulness instructors and practitioners as well as those engaged in Western Buddhism as a whole will benefit from reading this collection of essays.

David Clark
2.0 out of 5 stars Author needs to get a life.
Reviewed in the United States on 23 December 2016
Verified Purchase
I have trouble with the authors concerns about mindfulness being taught and used in venues other than pure Buddhism. Mindfulness is beneficial in many areas of my life. I think Rosenbaum needs to get a life.
Read more
9 people found this helpful
Report abuse
See all reviews
Back to top
Get to Know Us
Make Money with Us
Let Us Help You
And don't forget:
© 1996-2021, Amazon.com, Inc. or its affiliates